In the Winter issue of Die Cast X we explored much of the history of and the fascination with the Cult Car Classic Christine in our feature “Wheels of Fury.” In that issue we also reviewed the newest release in Auto World’s Christine 1:18 series—the Buddy Repperton ’67 Camaro. [If you missed it, you can pick up the issue HERE.] But there are two other cars from that film that are also part of that series, and we figured it would only be right to examine those models too! 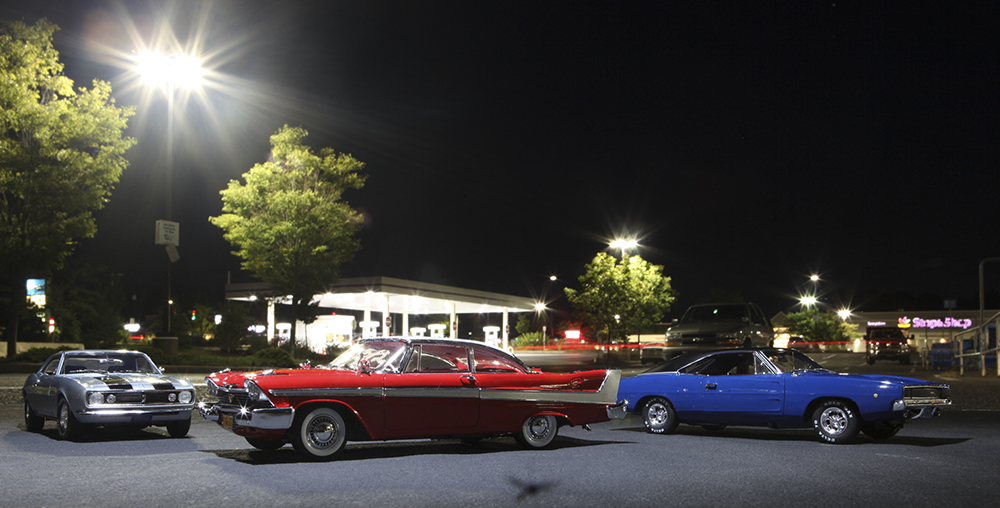 With a horror film like Christine, the hero is often not the biggest star—and that is certainly true of good guy Denny Guilder and his ’68 Dodge Charger. And while the blue B-Body doesn’t get the screen time of the film’s notorious title namesake, it has garnered its share of admiration over the years. Classy and tough and exuding an understated coolness that mirrors Denny’s character in the story, it is not much of a spoiler to reveal that it’s the only one of the three Christine cars that survives the film unscathed. 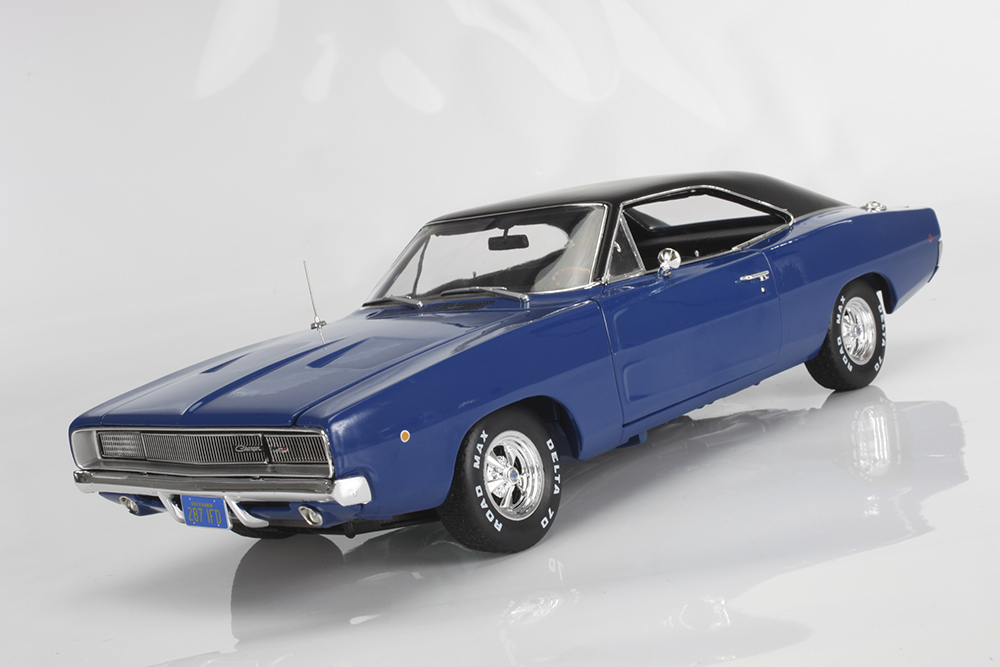 Putting Denny in a ’68 Charger was a decision made by the film production designers. In the original novel, Stephen King had assigned his protagonist a much more plebian Plymouth Duster. While the film stuck with a Mopar, the switch to the iconic Dodge gives audiences a welcome boost in cool factor. We get a number of good angles of the car in the film, and the mildly modded street machine is perfectly archetypical of the type of hotrod that a high-school kid like Denny might own in 1978 (when the story is set.) But there is no exposition dialogue about it in the film, so we actually know fairly little about it, other than it’s a standard Charger (not an R/T) and wears a set of Cragar mags. 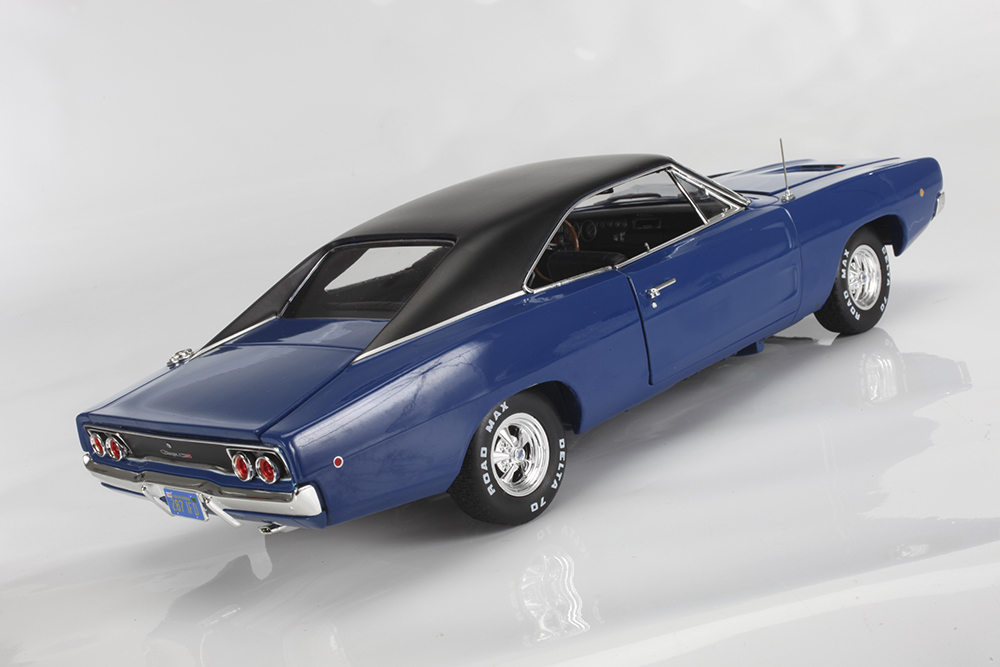 That gives Auto World some creative license in interpreting it in scale. The casting is from Auto World’s Authentics Series—which is to say excellent. The deep blue isn’t a factory color, but it is true to the hue depicted on-screen, and the car wears a vinyl top, and the appropriate chrome trim. The only details I take exception to are the painted on marker lights (I know cast-in versions would preclude using the same casting for ’68, ’69 and ’70 model years, but a better job could be done—possibly with decals under the clear coat.) 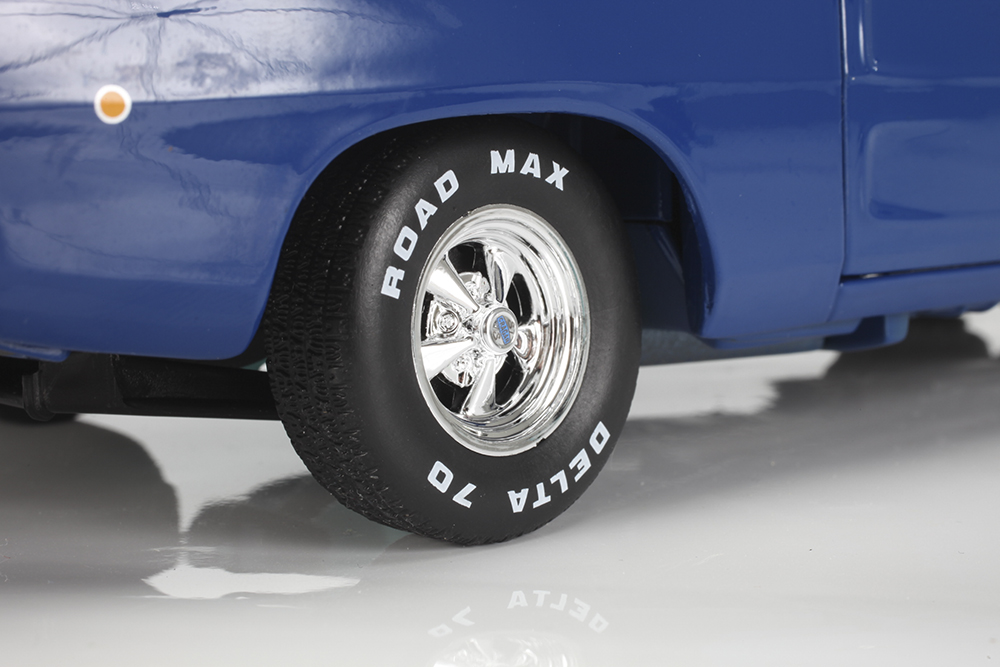 We get a few scenes with Denny and Arnie cruising around in the Charger, and from those we glean a few interior details. We get brief glimpse or two of the deep-dish 3-spoke steering wheel and black vinyl low-back buckets—both of which the model captures, although the model’s seats are oddly pitched back into a semi-reclined position. Movie cars are almost always automatics in real life, but no transmission is called out on-screen so Auto World chose a 4-speed. 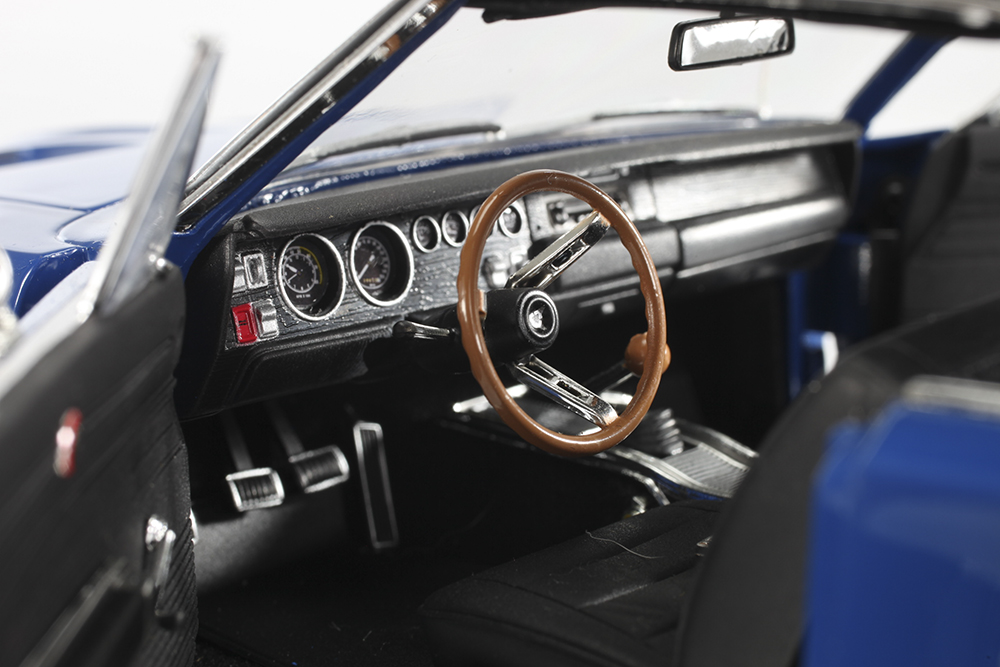 As a plot point Denny injures his clutch leg halfway through the movie, after which he actually does surrender the wheel of the Charger to love interest Leigh Cabot (played by future Baywatch babe Alexandra Paul!) which, for continuity’s sake, supports the thesis of a manual transmission so I am onboard with Auto World’s choice of gearbox. And the rest of the interior is very authentic, with a nicely cast center console, woven lap belts with metal buckles front and back, and carpeted floorboards. Dash detail is there too.

The power plant in any movie car is usually going to be an exercise in inference. The film actually does show an authentic shot of Christine’s V-8, but Denny’s motor is left to the imagination. The engine pitch heard in the film suggests a big-block, although we never actually see the motor, and as with virtually all films the engine sound effects were added by Foley artists in post-production, so the actual car could have had anything from a slant-6 to a Hemi under the hood. 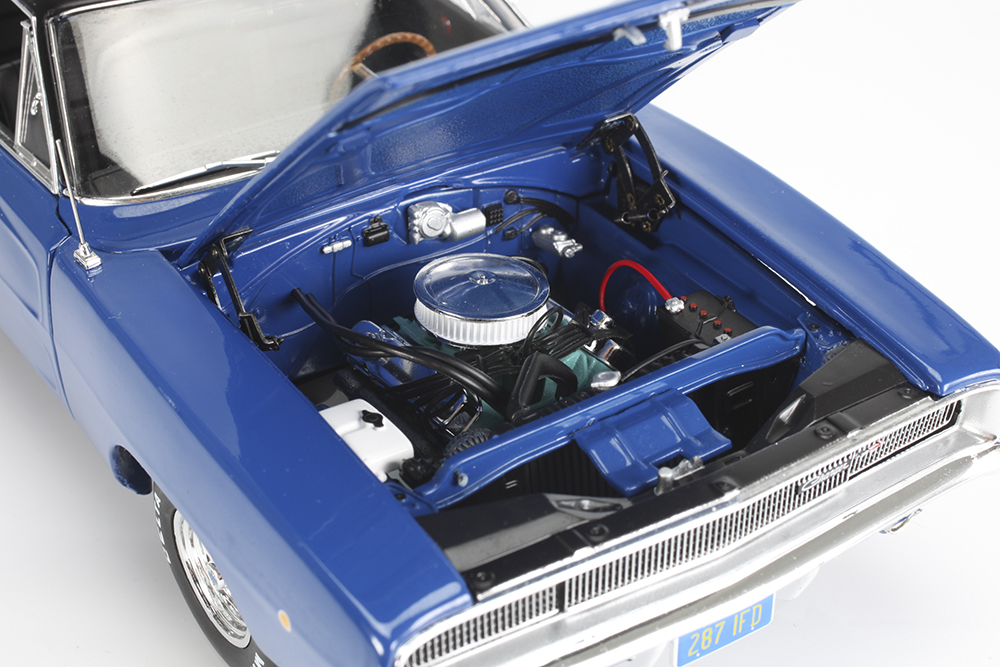 Auto World chose an appropriate mid-range power plant—a 383 with a set of chrome valve covers and an aftermarket open-element air cleaner—nicely detailed with all the trimmings: belts, heater and radiator hoses, plug wires, battery cables and the correct pale blue-green hue for the block and heads. This is both authentic to the character of a high-schooler’s hot rod and among the most prolific of ’68 Charger engine options, so it’s a good choice and done well.

The Charger floor pan is one of Auto World’s best chassis plates, and encompasses all of its best features. There are functional springs front and rear, set at an authentic ride height. The chassis itself is highly detailed and has nicely done overspray. The differential is geared so the driveshaft revolves with the rear wheels. 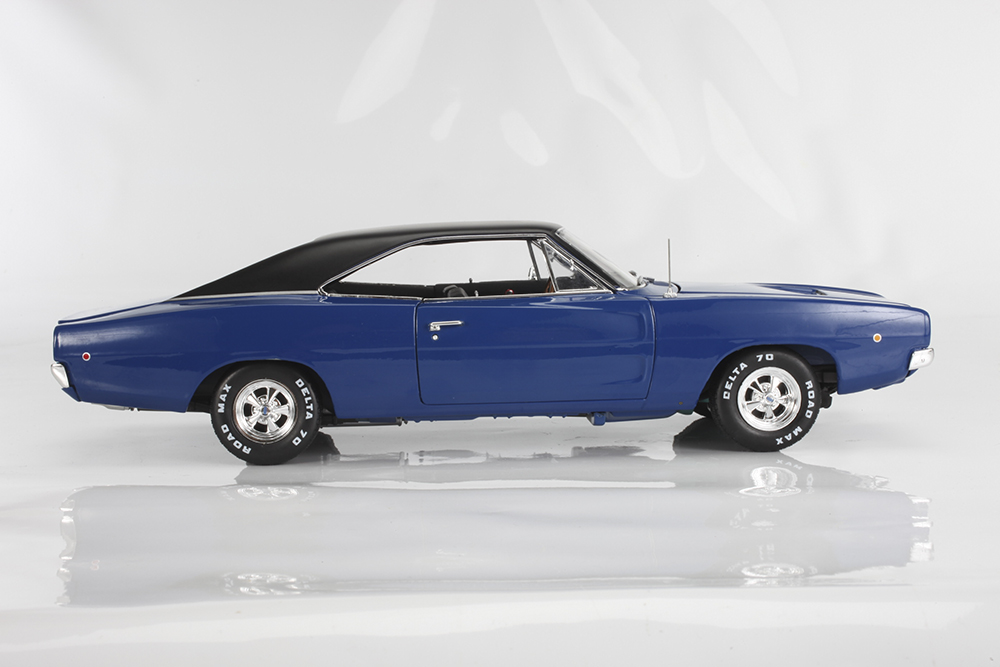 Speaking of, the aforementioned Cragar S/S rims have a very authentic shape. Their chrome surface is contrasted perfectly by blacked out centers between the five spokes and subtle ‘Cragar S/S’ logos on the center caps. And they are wrapped in 14-inch radials with film-correct off-brand Road Max Delta 70 tires. 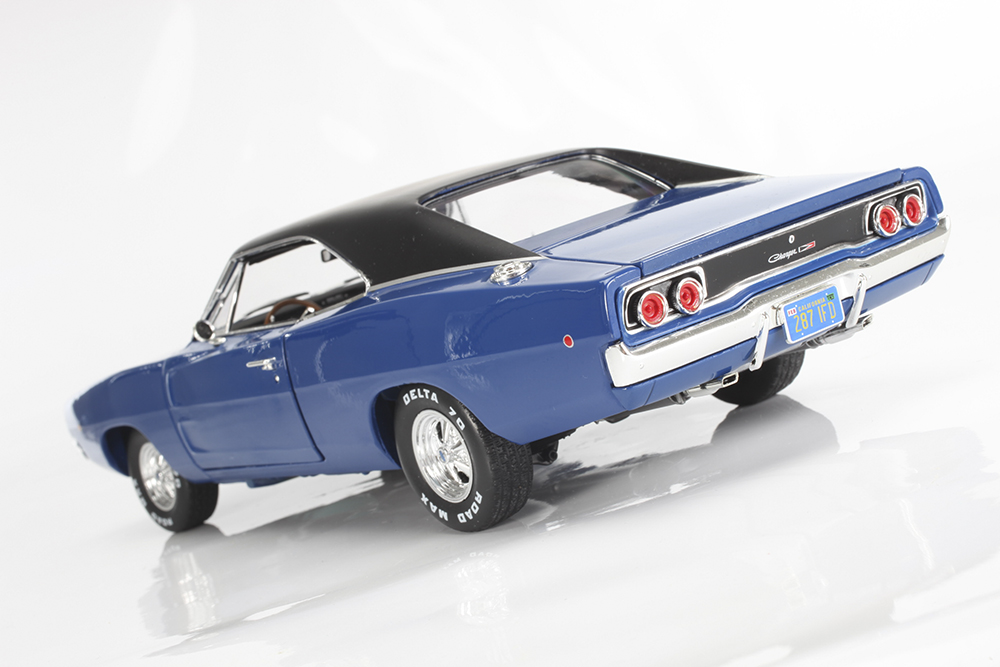 So charismatic is leading lady Christine in this film that every other star—be they two-legged or four-wheeled—gets overshadowed a bit. Such is surely the case with Denny’s Dodge, but that does not diminish the quality of this scale rendition, nor the satisfaction of owning it as part of the three-car series that Auto World has produced in tribute to the film. Objectively, the Charger is probably the best quality model of the three, being from the Authentics series casting that is among Auto World’s best tools. If you’re a fan of the film that put the Fury in to Plymouth this is a must-have.