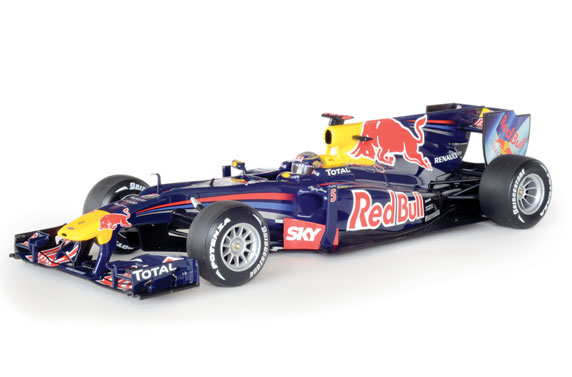 Sebastian Vettel is one amazing Formula One driver: young, talented and very, very fast. Driving for Red Bull Racing, the 25-year-old German has finished on the podium in almost half of the F1 races he’s started, won more than one-quarter of them, has won the F1 World Championship in 2010, 2011, and 2012 and, as of this writing, is leading the 2013 F1 Season with two wins in four starts. We’d call that a good start, if his goal is to challenge Michael Schumacher’s record for the most  F1 Championships. Minichamps’ 1:18 model of his RB6, configured as it was raced in the 2010 Brazilian Grand Prix, is beautifully assembled. The rich navy blue paint with red, yellow and white Red Bull livery is about as striking as you can find, and the photographic end plates on the rear wing are nicely replicated. The  car’s stance is spot-on, and though it’s sealed, with no removable panels, what you can see is magnificently done. On the corners, scuffed tires mounted on OZ Racing wheels look perfect. The suspension pieces, undertray and diffuser are all done in fabric textured plastic, nicely replicating the shapes of these bits and their carbon-fiber construction, too. With Schumacher as his hero, and all that history already behind him, this remembrance of Vettel’s first championship year might become one of the breakout collectibles from a potentially phenomenal career … and that’s no bull. — Bill Bennett