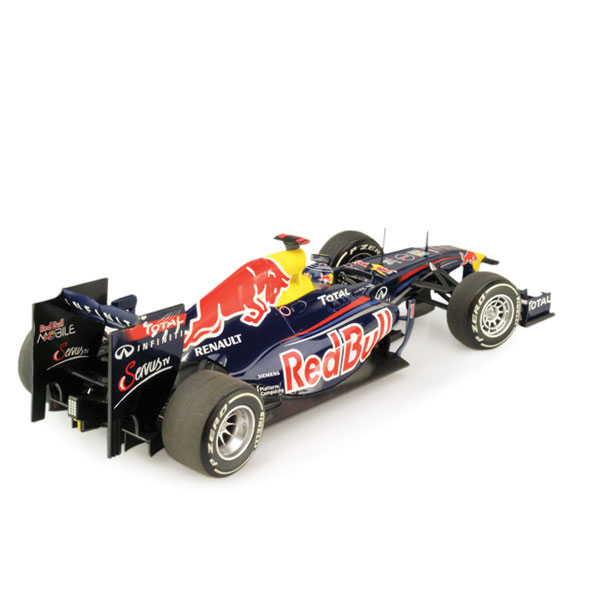 One of the best parts of poring over a model like this Minichamps’ 1:18 Renault RB7 is comparing the model to the real thing – a pretty easy task, given the virtual reams of photos and multiple cyber-shrine web pages that follow this one’s pilot, Sebastian Vettel. It’s even more fun when the model is patterned after a victorious machine, like this one is. No, Vettel didn’t win the Japanese GP that day in October 2011 — he placed third, behind Jenson Button, in a McLaren, and Fernando Alonso, in a Ferrari – but the conclusion of the race marked his second successive World Drivers’ Championship. All Vettel needed that day was a single point — he was leading Button by 124 — and this Renault took him to the podium in style. This is a great-looking piece. Minichamps cut their teeth on race cars, and the model’s shape and stance are perfect. The decos on the sealed body model are done in a mix of rugged tampos and a few decals here and there (yes, licensing can be a last-minute thing), and the graphics seem to have grabbed every detail we could see, right down to the complex series of sponsor tags on the car’s nose. We love the scuffed tires and correct, white-lettered rubber; even though the outrageously complex front and rear wings wing lack the cross-sectional delicacy of the real car’s amazing fins and foils, the pieces are all here, and beautifully placed. The carbon-fiber texturing on the chassis and suspension bits is neat, too. The wheels steer, and Seb is at the helm – what more could a Vettel fan need?  – Joe Kelly, Jr.