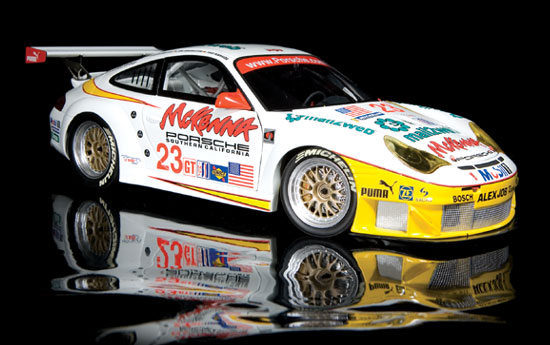 The Porsche 911‘s silhouette is so familiar that we sometimes forget the nearly constant state of development the model experienced over the years in the name of performance. Particularly with the GT3—the competition models Porsche builds and sells to customer race teams around the world-the car is constantly evolving. A big leap forward happened in 2004, when the RSR version arrived, reviving a designation steeped in 911 racing history. The RSR featured numerous technical up-grades, including a revised suspension and-most significantly-a sequential gearbox, allowing precise and nearly seamless full-throttle shifts. The car was a winner from the outset, and the Minichamps 1:18 model you see here celebrates the RSR’s inaugural victory in the American Le Mans series at the 12 Hours of Sebring in March 2004. The German trio of Timo Bernhard, Jörg Bergmeister and Sascha Maassen dominated in their RSR, setting the pole for the GT class before winning it, and even besting all but one of the much more powerful GTS-class cars. Minichamps captures the efficient elegance of the RSR from its deep airdammed nose to its aerodynamic undertray tail. The tiny engine cover is slotted to fit around the rear wing stanchions, but don’t set it aside before you examine the accurate air ducts that mate up perfectly to the engine‘s restrictor inlets. Those inlets, shrouded in their (simulated) carbon-fiber funnel are the highlight of the engine detail, though the hoses and lines are also worthy of note. My favorite part of many GT cars is the inte-rior, where a fascinating mix of stock and race-spec pieces graphically illustrates what production-based sportscar racing is all about. The detail on the digital instrument panel that replaces the gauges in the stock dash is there but is a little soft. That is more than made up for with the excellent Recaro racing seat, roll cage and the distinctively tall sequential shift lever. Very cool! 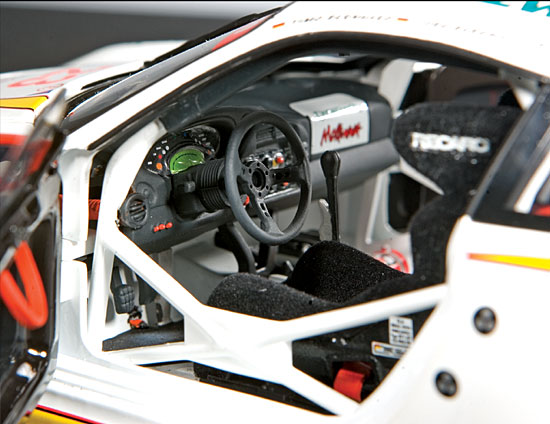 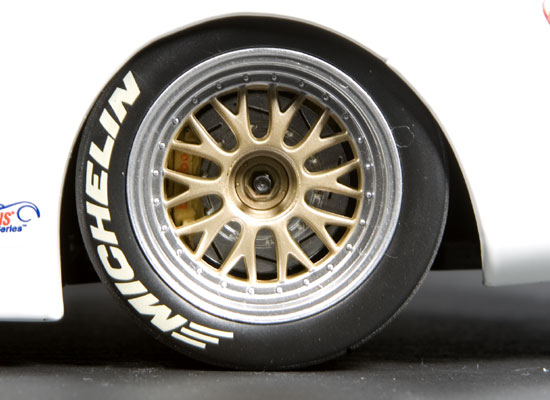