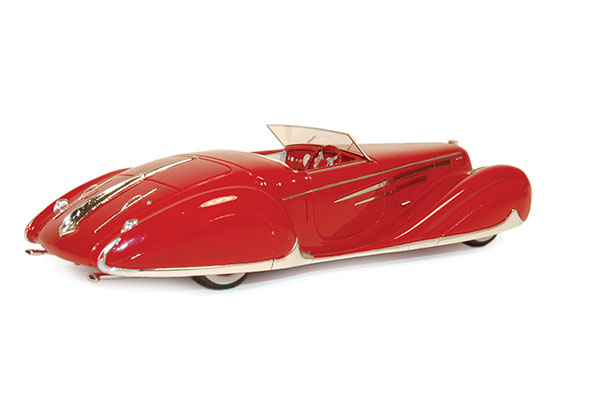 The French built the sexiest cars in the world in the pre-WWII years; those who doubt need only to look at Minichamps Mullin Collection 1939 Delahaye 165 with its Figoni & Falashi cabriolet body.  After selling the first one at the 1938 Paris Salon, a second was built so quickly for the 1939 New Your World’s fair that its Type 165 V-12 engine was only a hollow shell.  Interned by customs during the war, it was sold in 1946 to a Californian who replaced the engine with (what else?) a Cadillac V-8.  Over the next 45 years, the car was lost, found again, and passed through several owners before being completely restored, reunited with its original engine which was made functional, and wound up in the Mullin Collection.  Ixo modeled this car several years ago but Minichamps’ new version is better in every respect, with excellent dark red paint that’s set off by a wealth of plated, photo-etched, and bright printed chrome trim.  The spectacular body’s lines are reproduced perfectly—that includes the skirted front fenders which are wide enough for the wheels to reach full lock.  Interior details are as complete as the exterior, with very thin piping on the authentic white upholstery, plated interior handles, and pedals, handbrake, and shifter all tucked up under the dash, which has correct white gauges with red numbers and needles. — Wayne Moyer