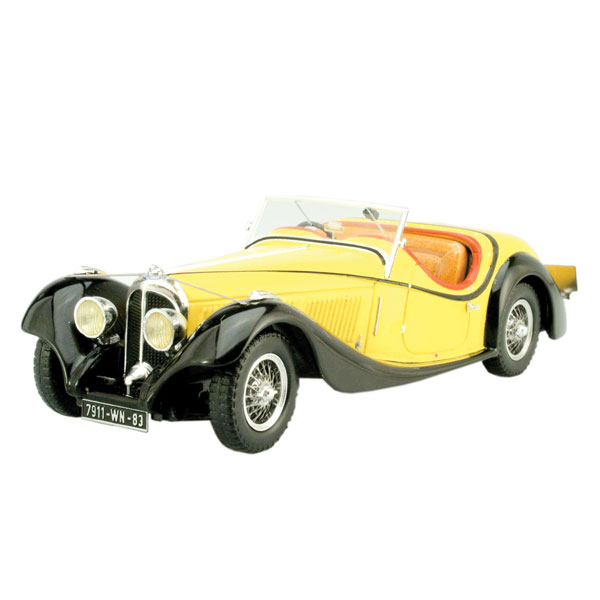 Minichamps’ latest entry in its “Mullin Automotive Museum Collection” series is this 1:43 1934 Voisin C27 roadster, as bodied by Figoni, and restored á la Mullin. The yellow and black paint are hard to miss, and notes like the tiny hood latches, majestic winged radiator mascot, and the readable gauges in its dash are best seen through a magnifier. The real car, chassis number 52001, was one of only two made; after being shown at the Madrid Auto Salon, it found its way to the garage of the Shah of Persia, for 23,000 francs. Back then, it was green and yellow; years later, after being found in a barn (yes, that does happen), the car was restored by descendants of the original carriage maker and Voisin’s chief designer, who painted it blue. Ultimately, Peter Mullin located the car, and had it restored yet again, painting it in the colors we see today. Judging by comprehensive photos of the real car, we can’t find a detail that’s been missed. Through the camera lens, the wired wheels,  faux ostrich seat upholstery, and hollowed out exhaust pipe make the replica hard to distinguish from a model in a larger scale  – perhaps even the real car. One detail in particular had us gobsmacked: a tiny golden dot on the model’s dash, which represents (if not replicates) a brass St. Christopher medal on the restored roadster. That golden dot says a lot about this maker’s impeccable eye, and this important series continues to amaze.  — Joe Kelly, Jr.