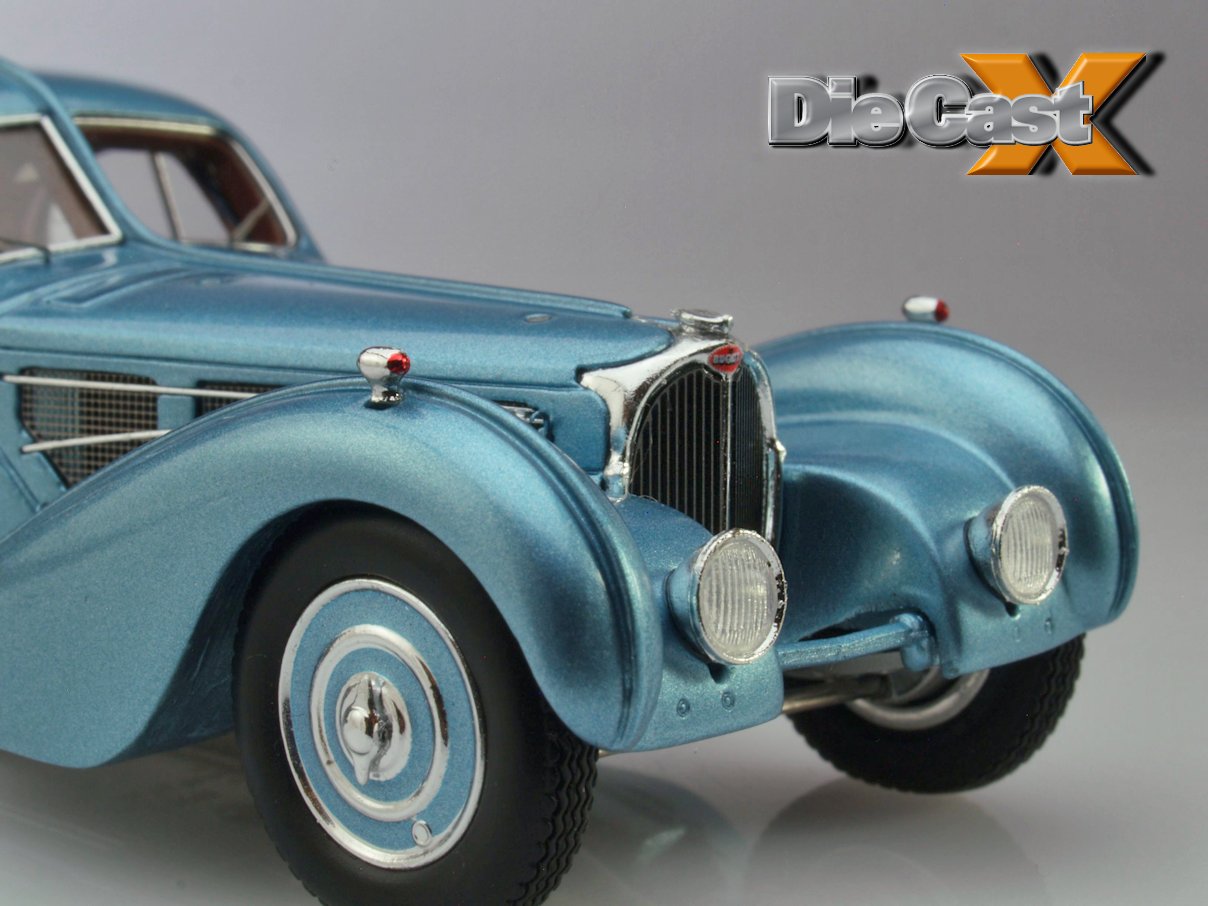 Minichamps’ “Mullin Automotive Museum Collection” is really hitting its stride this past week. No fewer than three new models have appeared here at Die Cast X South, and that’s made for some deep-chested ooh-ing and aah-ing around here.

In a word: amazing. Our sample of the Mullin’s 1936 Bugatti Type 57SC Atlantic came out of its trick, clear-topped display base looking like a million bucks (well, like a whole lot more than its $95.00 asking price), with a dead-on casting wearing the metallic blue of chassis 57534, the car originally owned by Lord Victor Rothschild. Victor had taken delivery in 1936; three years later, he decided to return the car to Bugatti for a little horsepower bump, and Bugatti obliged by fitting a supercharger. The Type 57 was now a Type 57SC; Victor celebrated the new name by over-revving the engine and then parking the wounded exotic and eventually selling it. The car changed hands a lot over the next few decades, and even successfully crossed the North American continent (under a slightly lighter right foot, apparently) when a new owner picked it up in New York and drove it to California. These days, it’s still there, in Oxnard, as a loaner to the Mullin Museum.

The details on this model are extraordinary. Photo-etched metal is everywhere; the vents on the sides of the hood, the windshield wiper arms, the bars in the grille, and even the four fasteners atop the hood are made of the stuff. Those last pieces are truly remarkable, with a central opening flanked by three smaller dimples – all in a piece that’s approximately 1/32″ across. There’s even more of the detailed p/e on the rear spats, acting as latches.

Inside, the model’s got a wood grained dash, a beautifully done steering wheel, and a delicate shifter and brake handle. That’s not surprising, given the rest of the cabin, which includes full-on door panels with handles and cranks, and a sweet pair of dark blue seats – replete with chrome frames.

Aside from the very nicely done NEO in 1:18, we’ve seen one other resincast model that approached this level of detail, and it set the standard for scale model resin-bodied Atlantics – Mikhail Bashmashnikov’s utterly perfect take on Ralph Lauren’s car, in 1:24. That work of art is hard to find, and worth every penny of its original asking price of $575.00 – or more. For everyman 1:43 collectors who appreciate truly wonderful miniatures, this model – indeed, this series – is well worth looking into. Highly recommended.  – DCX