1:18 | $249.00
McLaren’s latest supercar has a name more suited to an inventory sheet than evoking romance. No lilting turns of phrase attached to seasonal winds, exotic faraway lands, or famous fighting bulls here; in fact, the handle bestowed on this otherwise glorious machine – MP4-12C – could denote a refrigerator part. And that’s a shame, because the car this punch-card handle hangs on is a machine almost universally loved by all who drive it – or who have the just-over quarter-mil ticket price to park it in their garage.

The love affair starts with the car’s tractability. The McLaren starts, runs, and drives with so little drama that it’s easy to forget that its other personality is only a press of the pedal away; after a tweak of the drivetrain and ride settings on the center console, crazy things start happening – and quickly. The car’s twin-turbo V8 creates 593 horsepower, and as shifted through a McLaren developed “Seamless Shift Gearbox” that power translates to a 0-60 time of three seconds flat, and a top speed of 205 miles per hour. Not bad for a car with an appliance part name.

Minichamps released this sample in Volcano Orange a couple of months back, and we’ve been hard pressed to take our eyes off it for too long. It’s an amazing paint job with a rich metallic that lays on the casting flawlessly, never bunching up or hanging too deep in any creases or folds anywhere. The wheels are equally well done, in a satin magnesium sheen that extends to the brake discs and calipers behind. The screening in the Saleen-like side scoops is real metal done in a gloss black, and the fitment of all the opening panels – doors, boot, and rear deck, as well as a rising/tilting spoiler air foil at the rear – is near perfect. But we do advise a look at the included how-to regarding opening those bug-wing doors, lest you fat-finger the complex hinges. You’ve been warned.

The details under all of those opening panels is crisp, if a little plasticky, a problem that wouldn’t be so noticeable if the plastic were only darker. The castings themselves are good, and the 3.8 liter M838T engine (yep – more numbers) is nestled in nicely; go back to the rear of the car and you can tilt the spoiler up on tight little metal struts. Speaking of tight, you’ll need to press the release button under the nose to get the boot open for a peek. Once the doors are mastered, the cabin at the center of the car has orange-centered seats, a future-tech center console, and readable gauges.

Here’s the net-net: under its skin, the real McLaren’s nooks and crannies aren’t as dramatic as, say, a Lamborghini’s, and its cabin isn’t as plush as the one you’ll find in a comparable Ferrari. That didn’t leave Minichamps much room for bells and whistles, or fancy textures. On the shelf, this one is a four star car – and that’s a number we can live with. – DCX 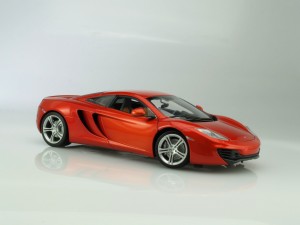 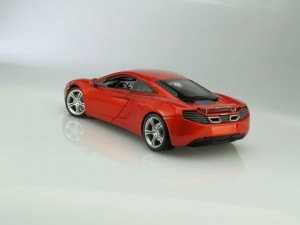 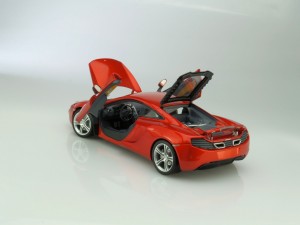 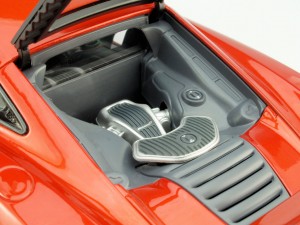 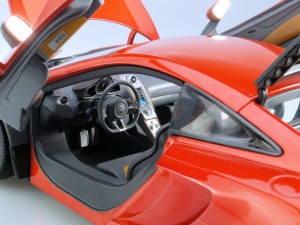 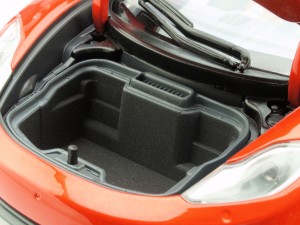