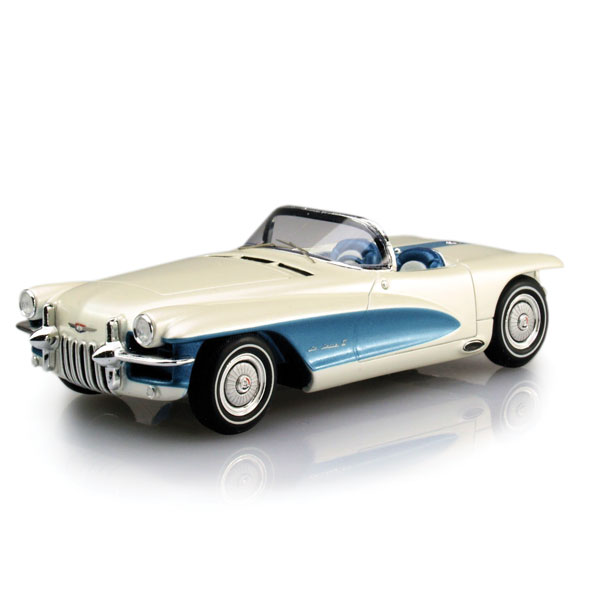 You have to hand it to Joe Bortz. Not only is he one of the car world’s most influential collectors, he’s also one of the best “carchaelogists” around. It was Bortz who located the cut-to-pieces wreckage of GM’s 1955 “LaSalle II” roadster moldering in a Michigan junkyard. And it was he who immediately got elbows deep in the arduous task of putting all the pieces back together to resurrect the glorious machine in time for an unveiling at the 2013 Amelia Island Concours. We looked at a pre-production sample of Minichamps’ resin bodied 1:18 of the car in our Spring 2013 issue, and this finished production piece maxes out the potential that still-tweaking model had. Arriving on a Motorama-themed, vinyl-covered base, the pearl white car is incredible looking, with blue coves, finely cast and metallized wheels, and photo-etched markings all over its flawless shape. The six-vent grille — a feature shared with the roadster’s sedan variant, also currently under Bortz’ roof — is flanked by beautiful chrome bumperettes and brilliant lensing. Behind a distortion-free butyrate windshield, the cockpit is ‘50s-era righteous, with a rolled and pleated dash top, great gauges, and seats cast to look like leather. We’ve had the chance to speak with Joe Bortz about the model, which debuted at Amelia alongside the real car. He’s thrilled. So are we. – Joe Kelly, Jr.