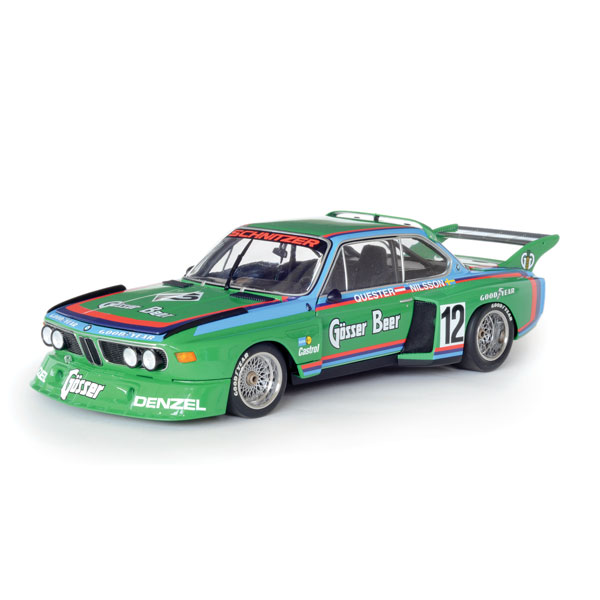 Team Schnitzer and their Gösser Beer-sponsored BMW 3.5 CSL had a good racing season in 1976, winning both the Nurburgring 1000km and the 6 Hours of Zeltweg on the Osterreichring circuit in Austria, finishing the season second to Porsche in the World Championship for Makes.  Nicknamed “Batmobiles” because of their outrageous body mods, the BMWs were colorful, and went like stink, to boot. After previously releasing the Nurburgring winner, Minichamps has now issued the Zeltweg car in a burn-your-eyes-out green, orange, purple, blue and white Gösser Beer and Denzel livery. It’s a wicked-looking piece, and beneath the livery, the model has opening doors and a removable bonnet and boot. Sitting on scuffed steam roller rubber and basketweave BBS wheels, the car hugs the ground with the slightest rake; taken alongside those hammer-blow graphics and livery, the interior is understated (as it should be) with matte black paint on everything except the instrument cluster, with a flocked racing bucket seat with 5-point racing harness for the solo passenger. Those passengers — Dieter Quester and Gunnar Nilsson, who shared driving duties at Zeltweg — made the most of the car’s 3.5 liter DOHC six, and so has Minichamps, stuffing a ton of detail beneath the lift-off lid. Overall, from its cow-catcher nose to its wild whale tail, this is a nicely done car with a lot of plumbing and wiring detail to go along with its hard-to-miss look. Recommended. — Bill Bennett