Zuffenhausen zeroes in on sporting perfection 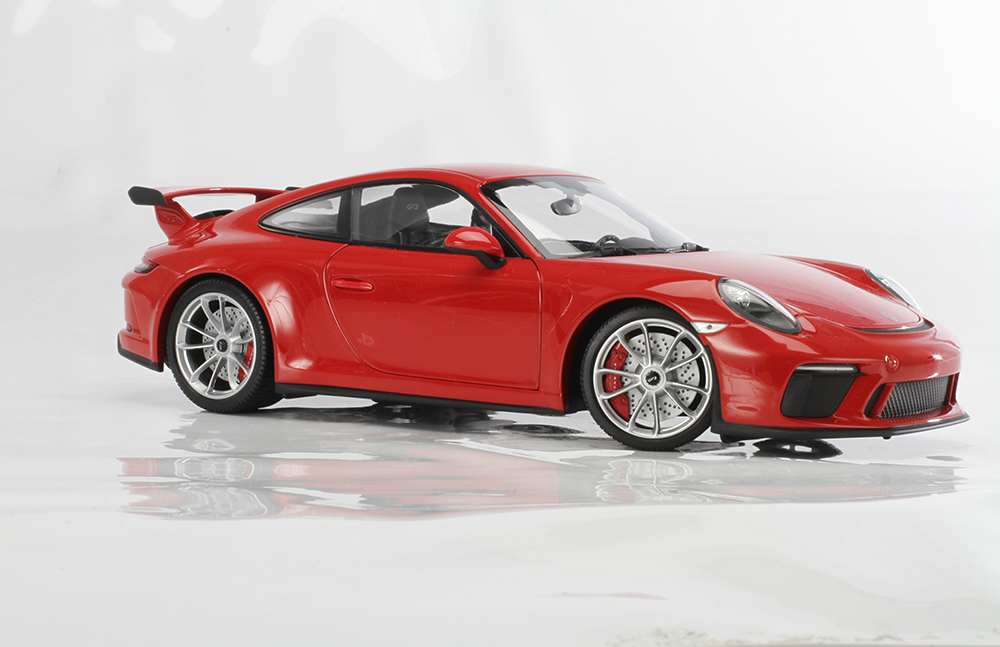 Doesn’t it seem like the engineering wizards at Porsche have officially discarded the laws of physics in favor of some more mystical force to govern their automobiles? How else but sorcery can we explain how exquisitely nimble and astonishingly fast Porsches have become while remaining effortlessly docile and rock-solid reliable in everyday use? And yet as supernaturally superior as Stuttgart’s rank-and-file sports cars are, there exists yet a more exclusive, more extraordinary subset of these exceptional machines. The greatest of them are based on that most venerable of Porsche nameplates—the 911—and trace their enhanced DNA back to the original 911 factory special, the ’73 Carrera RS. Like that car, the GT3 has been honed with dual purposes in mind—a street car that is equally at home on a race track. But unlike the handling compromises that earned the original RS its widow-maker reputation, the modern GT3 is supremely poised and immensely forgiving—somehow gaining a magical reprieve from Newton’s laws governing the pendulum effect of having the engine hanging behind the rear axle. 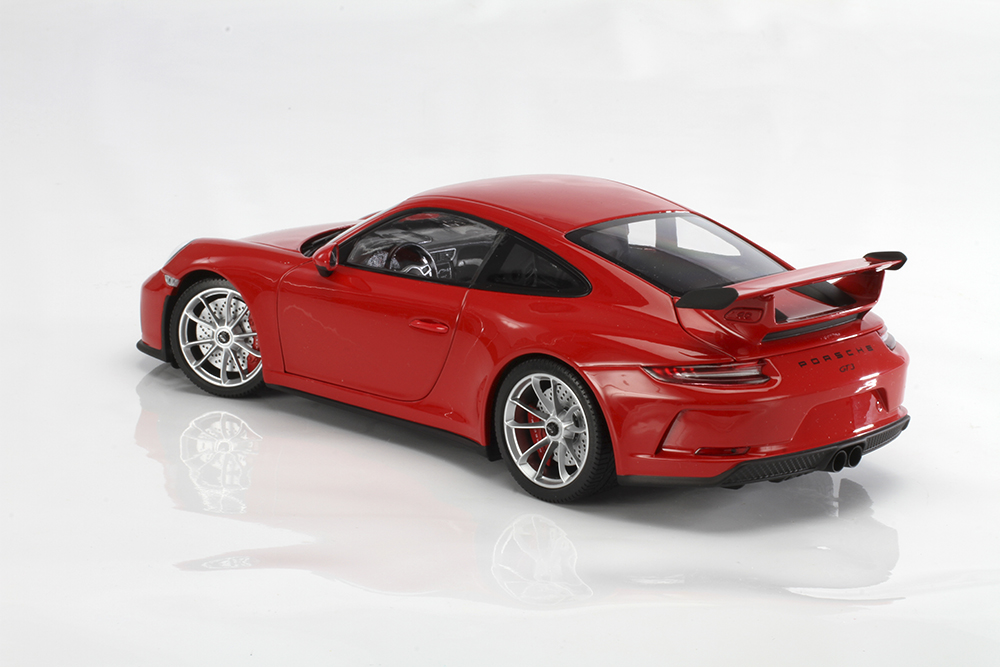 Porsche has assigned the current (7th) generation of the 911 with the (somewhat confusing) internal designation “991.” The 991 series debuted in 2011, but was extensively revised in 2016 and the new 991.2 GT3 went on sale as a 2017 model. The changes were subtle but significant. A new front splitter, a reworked rear wing that is moved up and back to increase efficiency, and better undertray air management increase downforce by 25 percent with no increase in drag. That translates to free speed! Those sorts of changes are anything but free for a diecast manufacturer as dedicated to accuracy as Minichamps is, however. It required a thorough retooling of the nose and tail plus numerous molded parts. Minichamps made the investment, and bucking recent industry trends it retained metal for the body casting and kept all its opening panels. The Guards Red finish is exemplary, and nicely accented with clear-molded light and marker lenses. The revised rear wing and air intakes on the engine cover look great too, as do the painted emblems. I wouldn’t mind if Minichamps molded the mesh in the front valence openings a little deeper to better maintain the illusion of grillework, but aside from that the new GT3 is impeccable. 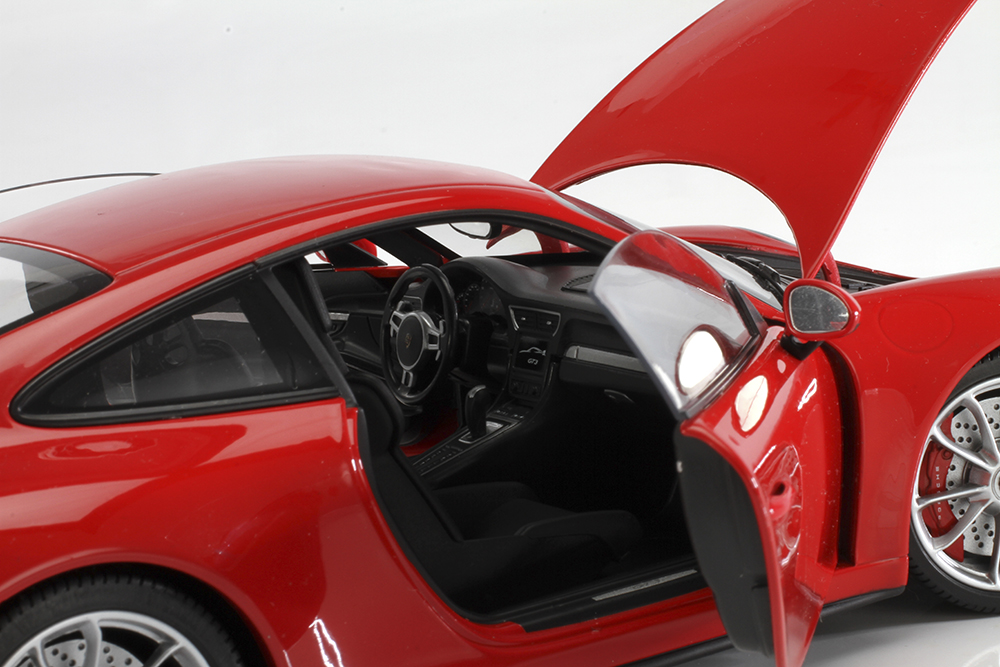 Impressively tight door seams and invisible hinges make a great first impression as we look to the interior. Porsche offers both a traditional 6-speed manual or the Porsche-Doppelkupplungsgetriebe (a name that makes painfully clear why the dual-clutch automated gearbox is referred to as simply ‘PDK’!) This model has the latter, which means it trades one clutch pedal for about 0.4 sec acceleration advantage—seems fair to me! The PDK lever and console and dash switchgear all have delicate paint highlights, while the infotainment screen and instrument panel appear to be precision-printed decals. Contrasting door trim indicates this car has the optional leather interior, and the shape of the seats is spot-on to the optional carbon fiber racing buckets with their distinctive harness openings. The only things missing are the striped ‘GT3’ logos on the seats. 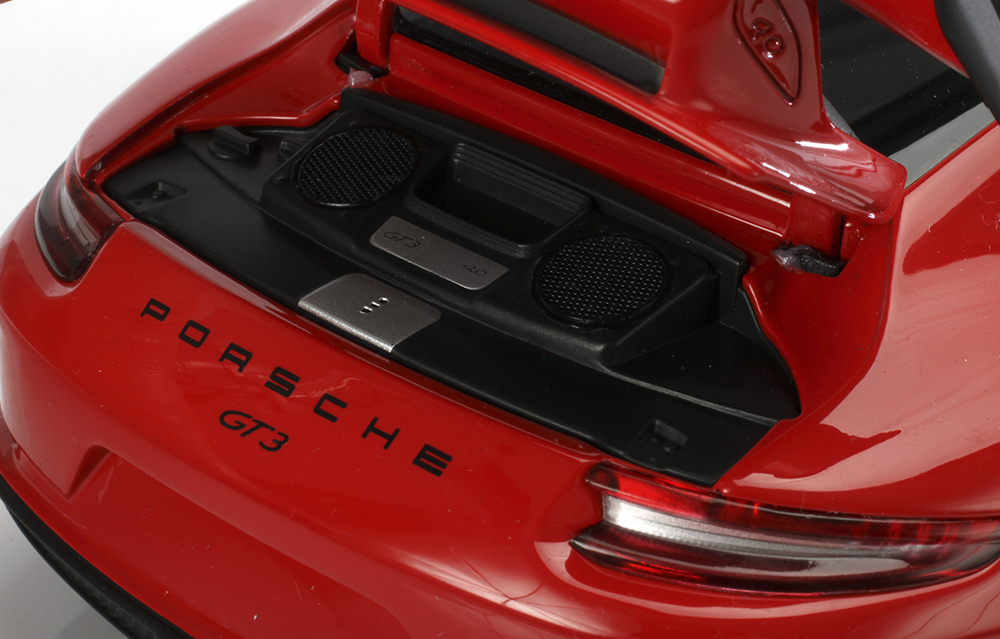 Powertrain engineers sought out more free speed in the form of reducing internal friction in the 4.0L flat-6. Doing so pushed the redline up to a screaming 9000rpm and freed up an extra 25 ponies over the 991.1 GT3 for a total of 500. That shaved a tenth or two off of the old GT3’s already scorching 11.2-second ¼-mile time, but the increase in midrange punch and better synergy with the PDK results in huge gains on track—to the tune of 12.3 seconds around the Nürburgring! The engine is brilliant in every way…except visually. The tiny rear deck cover opens to show little but the intake ductwork. Minichamps reproduces it faithfully, but there’s just not much to see. 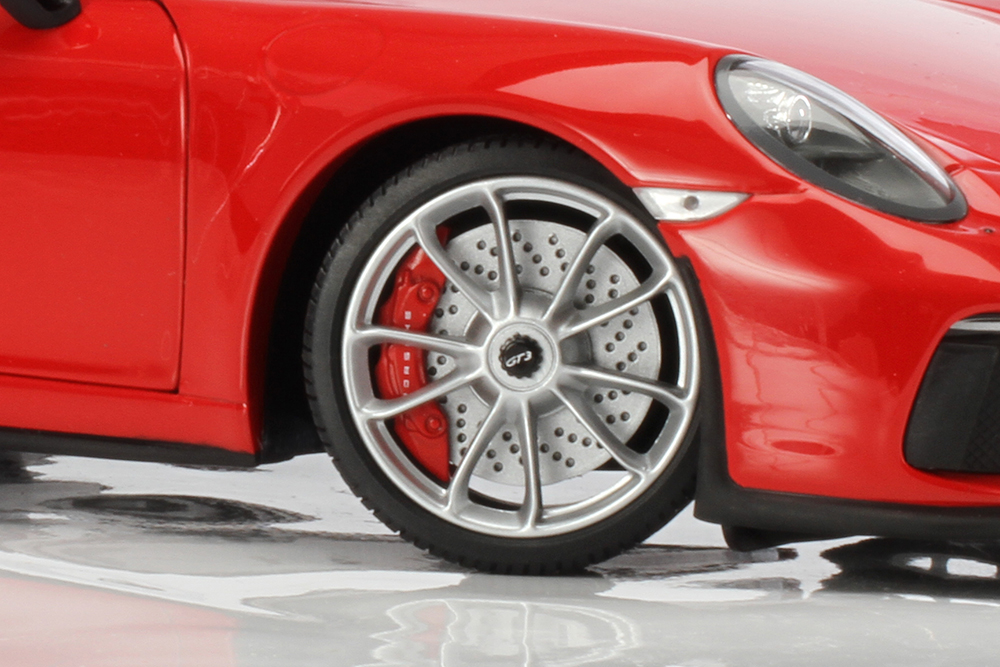 The chassis is a similar story. The adjustable suspension turns drivers into heroes, but the aero undertray hides most of the hardware. A cursory attempt at rear suspension detail is relief-molded into the chassis plate, but it’s uninspiring. Better to keep the GT3 on its wheels, and speaking of…These wheels are beautiful! They depict the giant 20-inch center-lock wheels in depth and contour, and they wear the optional Satin Aluminum finish—one of five wheel color options on the GT3. Tires should be Michelin Pilot Sport Cup 2’s; there are no sidewall markings, but the size and shape are correct. 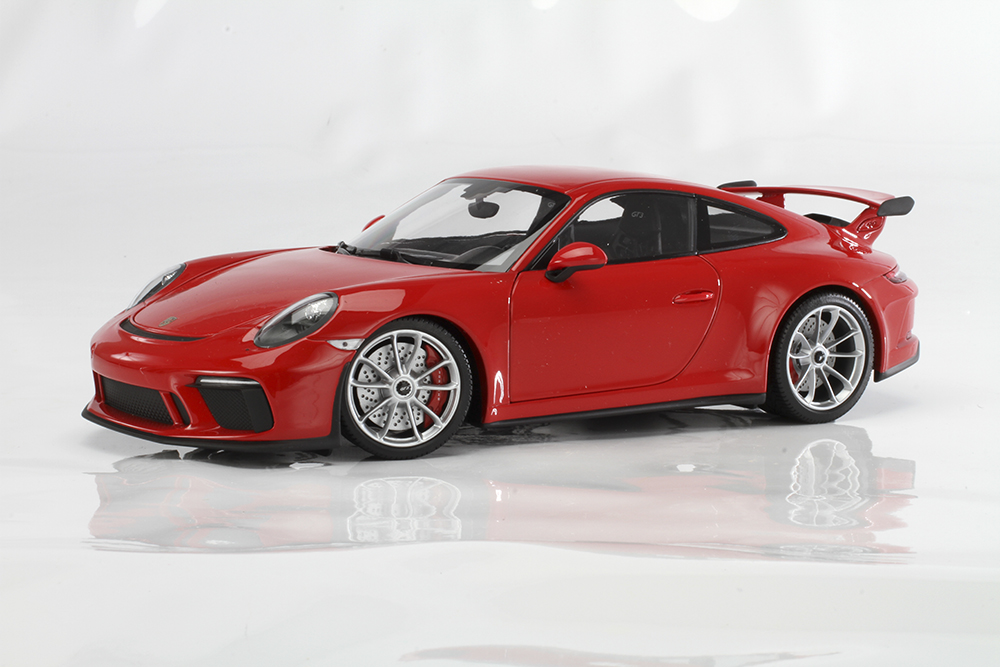 On paper there are faster, more exclusive Porsches than the GT3, but this is one of those cars that is far more than the sum of its parts. The way those parts work together to elevate the qualitative experience above the quantitative numbers has moved many Porschephiles to declare it the best all-around Porsche for sale at any price. It inspires an avid cult following that few if any other current-production car can match. GT3s are so sought after that they routinely get marked up tens of thousands above their $150k sticker price. That kind of passion makes for an ideal collectible, and especially for a German company like Minichamps producing a new GT3 model must surely be a point of pride. They took care to do it right, making a replica that will be a source of pride in your collection as well.