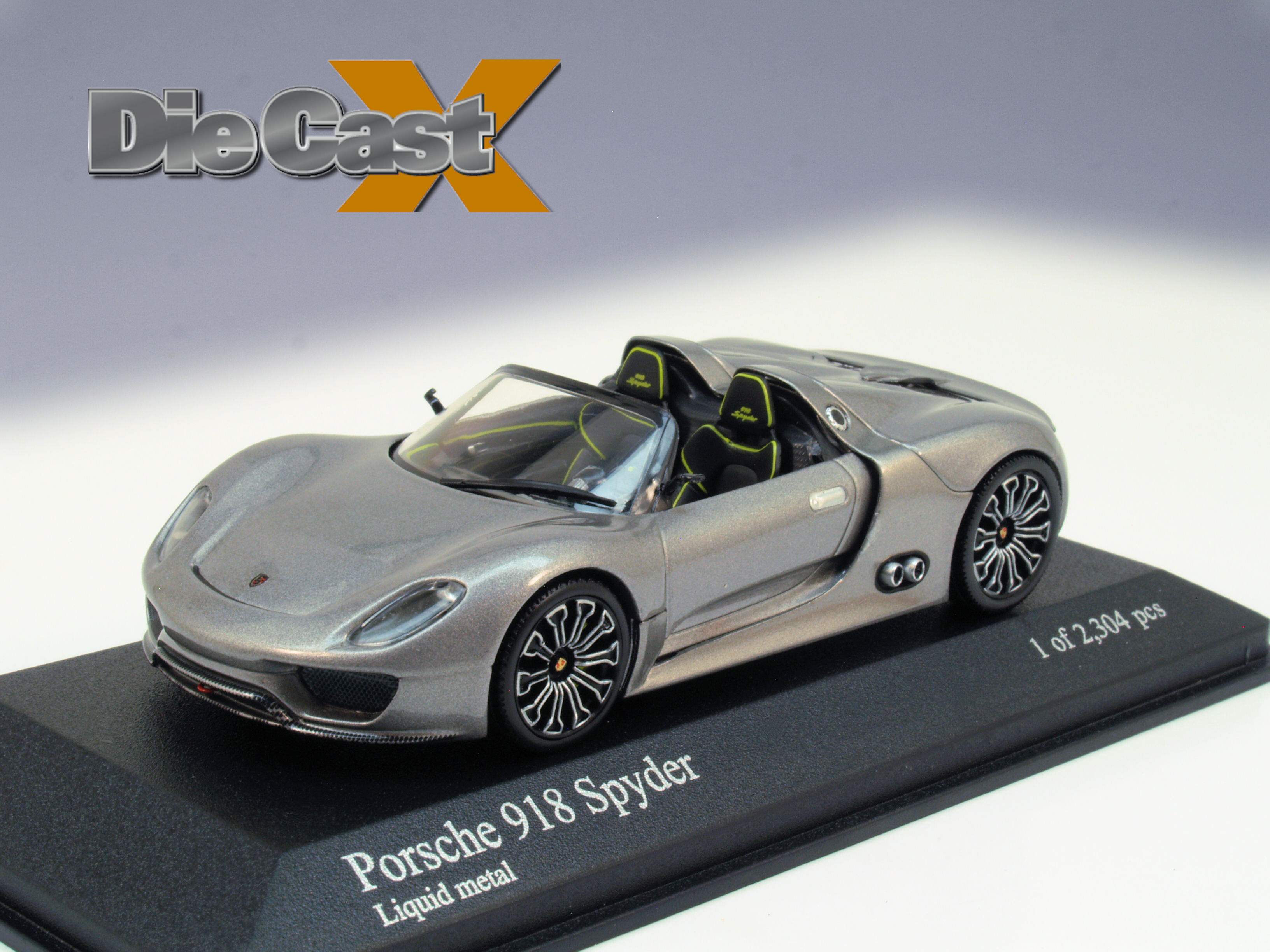 Any time you start to feel that the diecast hobby is getting out of hand – what with premium-priced limited editions, special runs, and all that good stuff – take solace in the fact that it doesn’t get any better in the real car world, especially if you’re skating in the supercar arena.

Witness the Porsche 918, an all-wheel-drive gas-electric hyper-hybrid that’s more Space Shuttle than Prius, with a 500-plus horse gas V8, a pair of transmission-and-front axle mounted electric motors adding an additional 218 ponies and electromotive twist, and… oh, yeah – a price tag of around nine hundred grand, should you decide to purchase one of the only 918 cars that Porsche will ever make.

Minichamps will be making a lot more of the 1:43 diecast version (2,304, to be exact), and this one arrived in concept-car “Liquid Metal” paint, for around fifty bucks. While it doesn’t have the display presence of the 1:18 version the company has on tap, it’s a neatly done little bugger with a sharply cast diecast body and a few well done trim bits for the windshield, cabin, and lensing. The huge spoked wheels are tidily cast, and with a strong light and a good pair of peepers, you can spot the neon green calipers and silver brake discs behind. Cool detail: those brakes are fixed in place, as are the real things. Spin the wheels (this thing rolls like a bandit, by the way), and the effect is sweet.

Behind an acrylate plastic windshield, the gut is neat, with tamped-on console detailing and piping on the seats that’s a bit too thick to represent the real car’s custom stitched seat decos. That’s not a deal breaker; in this scale, the neon green is repped where it matters most – where it appears on the real car – and the gauges are  properly podded and placed above the steering column.

Only two issues reared their heads on this sample – a minor divot in the casting on the passenger side cooling scoop’s leading edge, and a mold part line on the plastic rear spoiler – but the slick little exhaust dumps on either side, the nicely done “mesh” screening in the car’s Ferrari 430-esque nose (actually done with well-dimpled plastic inserts), and the overall metallic fire and excellence of the paint finish more than made up for that.

In the real world, writing that huge check for the 918 gets you a chance to also buy an equally limited 911 Turbo S, done in special trim to echo the 918’s paint scheme, for an additional one hundred seventy thousand bucks. No word if Minichamps plans to offer a companion release to the 918, but it wouldn’t be a bad idea. What do you think?