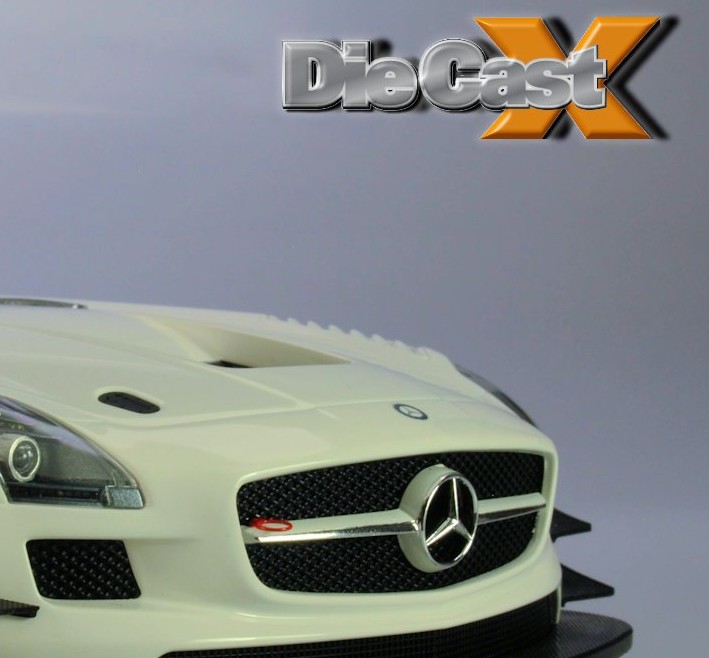 There a lot of letters attached to the track-ready version of Mercerdes-Benz’s  6.3-liter, mega-buck SLS, and to that jumble, Minichamps has added another three: ABS. As in plastic. That’s the material that the German maker has used for the sealed body shell of this latest model of the triumphant Teuton, seen here in its debut form wearing “AMG” and “Facebook” livery.

We’ll get right to it: in this white, the model is a stunner, mostly because the sealed plastic body sells the proportions of the racer from its gulping front end to its Cessna-sized rear wing. Add in the crisply cast and satin-toned comp wheels and fat (but no-name) rubber, and you have a package that can stare down all but the hairiest models in any race collection. The add-on decos are decals – high quality transfers that hug the casting well (apparently not the case in some early versions of another variant in red – but the factory has said they’re making amends, and we believe them).

The interior detail is great, and not all that hard to see, thanks to good glazing; take a wander around the car, and other neat notes, like the lensing front and rear, and the photoetched struts for the big wing, make the model a study in beauty and aggression, as told by a manufacturer always looking to leap forward with their scale model offerings.

Our verdict? Great stuff. Though the plastic hasn’t the resolution of resin, it’s a whole lot crisper, not to mention less expensive, than a comparable diecast tool would be. Curbside models are becoming more and more popular among race car collectors. If ABS – long a staple in smaller scales – proves itself yet another way for new models to appear, we’re all for it. We’ll be watching.