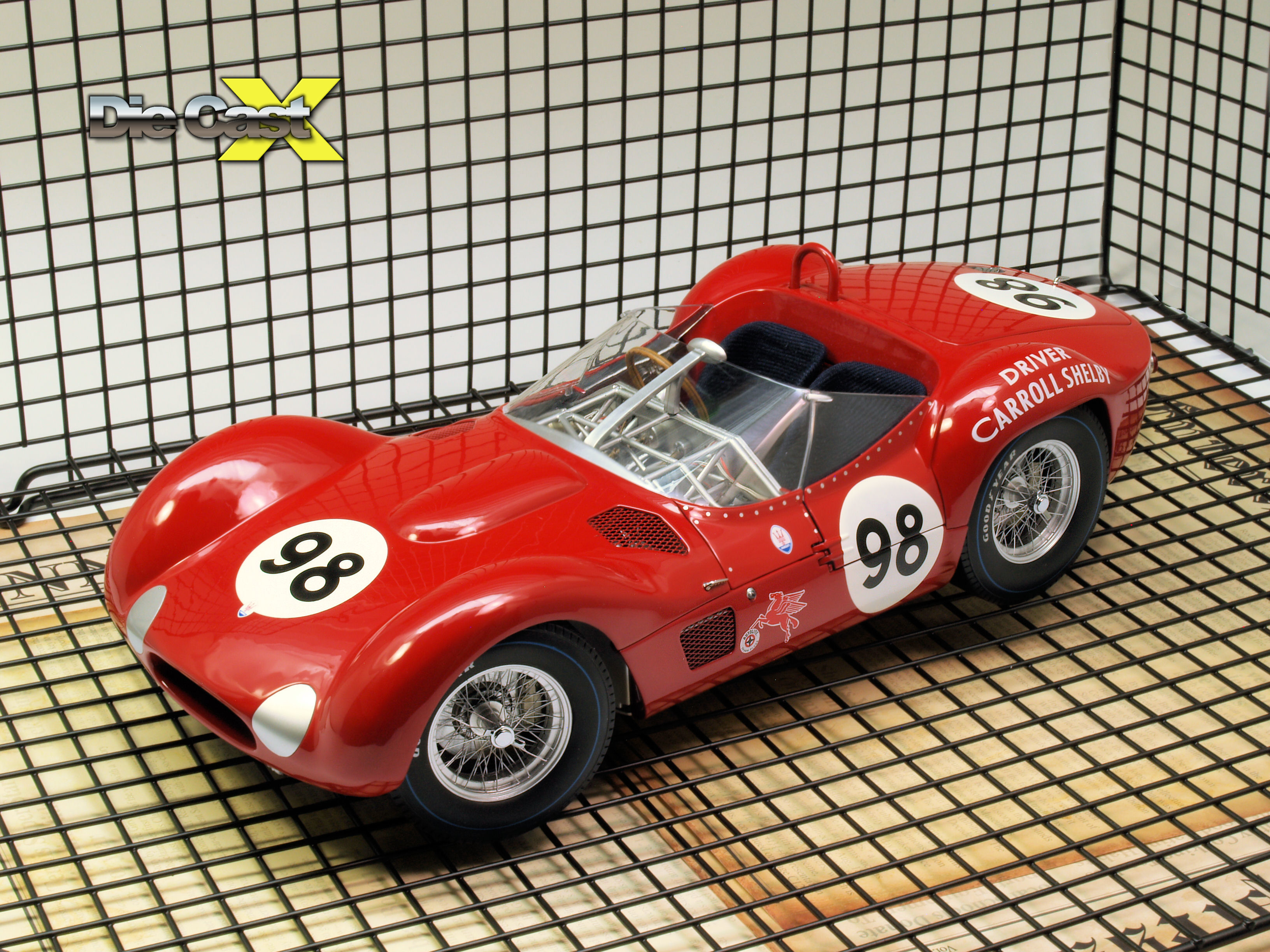 The ghosts of Moreno Valley are a restless crew. Wearing spectral race suits and coveralls, they wander and glide amid the shopping malls and rows of houses where once a great road course track lay, chuckling at the minivans and SUVs, and nodding together in silent accord when a Ferrari, Aston Martin or Jaguar passes by.

Riverside Raceway was here, once; a dangerous, demanding course that tempered the legacies of those who survived it, one hot, oily lap at a time. Carroll Shelby was among that crowd, and this car – a red Maserati Type 61 Birdcage – was his penultimate ride when he made his final laps at that course before retiring from the wheel in late 1960.

The race was the Times Mirror Grand Prix, and Minichamps’ model of the car is a mix of delicacy and heavily, cleverly cast elements. Fine, expanded-metal screens are set into the beefy body castings, and neat – though static – latch handles join tampo strike rivets and beautifully registered markings to bring the car’s color and livery alive. The replica’s stance, and the sight of the frame beneath the swept windscreen, give the model a near-museum grade presence on hand laced wheels and Goodyear Blue Streak tires.

The scale of the Maserati does much to further that feel, and promote some neat features. The front end tilts forward, the doors swing out, and the rear deck lid is removable (read that “droppable”, if you’re less than careful when handling the car). Beneath the panels, a neatly rendered plastic construction replicates the hundreds of small tubes that gave the car its strong, lightweight frame (as well as its “Birdcage” moniker). Nestled into the tightly sprung, steerable chassis is a nicely done model of the 2.9 liter, 250 horsepower DOHC four, tilted to the side. Wearing a pair of Webers, it’s wired with a colorful octet of red and black spark leads.

The cockpit gets a lot of mileage from a cast-of-a-piece floor and textile-covered seats. The full-view dash and gauges are cabled and piped, and a convincing fuse panel and steel-spoked steering wheel lie alongside a miniaturized “Durite” electronics module and Maserati build plate. Pull the rear deck off, and there’s a permanently-mounted spoked spare ahead of the fuel tank. Turn the car over, and a smooth metal belly pan offers peek-a-boo looks a the suspension and heat-blued exhaust.

The model may lack the pinpoint finery and exotic materials of a true museum piece, but this is a car you can enjoy in hand. It’s remarkably rugged, forgiving of the occasional fumble, and it offers up a truly historic, appreciably large image for a reasonable price. Somewhere outside a mall in California, the ghosts of Moreno Valley are smiling.