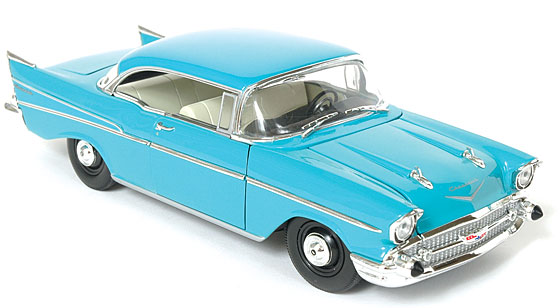 While the Bel Air grabs all the attention, Chevy made its profits with the less expensive 210 and 150 lines. The mid-level 210 line outperformed the Bel Air in 1955 and 56. It wasnt until 57 that more Bel Airs were moved off the showroom floor. The most desirable of the 210 line was (and still is) the Sport Hardtop Coupe. Just 22,631 were sold, whereas the Bel Air Hardtop Coupe found 166,426 buyers. M2 Machines Auto-thentics line has added the lesser known Chevy Sports Coupe to its 1:24-scale line. Covered in Tropical Turquoise, the dual-quad street sleepers exterior features the lower trim levelbut does so in style. The color works well with a molded roof unit (allowing for the same body casting to be used as a convertible). Tires and wheels are basic black steelies with styled center hubcap. The interior is a double-bench-seat model thats good but missing a few items, including a shifter. The engine is way above average for this price point: it includes multiple parts and some real detail. The M2 Machine 57 210 Sports Coupe is a cool little piece of American automotive history in a package not often seen in diecast. M2machines.com