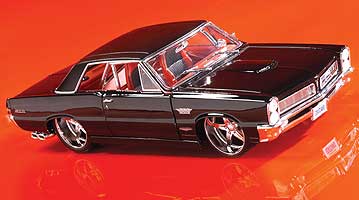 In 1998, OK; let’s get it out of the way right now. For some of you, slapping the pro-touring theme on the revered 1965 Pontiac GTO is akin to giving the Mona Lisa a nose job. For those purists, nothing but the unadulterated original will do, and that’s why there are dozens of straight-scale die-casts of this American icon ready to satisfy. For others, the harsh reality is that with the GTO now entering its fifth decade, the classic lines are starting to look a little dated. And for a new generation of enthusiasts whose parents weren’t even born when the GTO debuted in ’64, Pontiac’s maiden muscle car probably looks like the slab-sided Buick grandma drives to bingo night. For these last two groups, a few modern variations on a classic automotive theme are just what are needed to turn back the clock on an aging beauty.