Let it never be said that Lamborghini doesn’t have a sense of its history. Founded in 1963 by Ferruccio Lamborghini, the company has spent the last 54 years pushing the boundaries of the sports car world. The legendary Miura set the standard for the modern supercar, and in more recent times, a stream of ultra-exclusive limited editions have set new standards for performance, price, and ostentatiousness. But when it came time to celebrate the founder’s 100th birthday, Lamborghini needed something special. Without question, this celebratory supercar would have to be the fastest, most powerful yet—trumping the wild Veneno by 20hp (760hp total) and 10mph (230mph peak)—but rather than go bigger, louder, or flashier, Lamborghini went a different direction. It looked to its history, drawing inspiration from the extravagant yet refined Miura that Ferruccio personally oversaw, which set the tone for the company’s next half century. The appropriately named Centenario is the result. Just 40 will ever be made—20 coupés and 20 roadsters—priced at $2 million to start, offered to a select clientele by invitation only. All 40 were sold before the first was built. 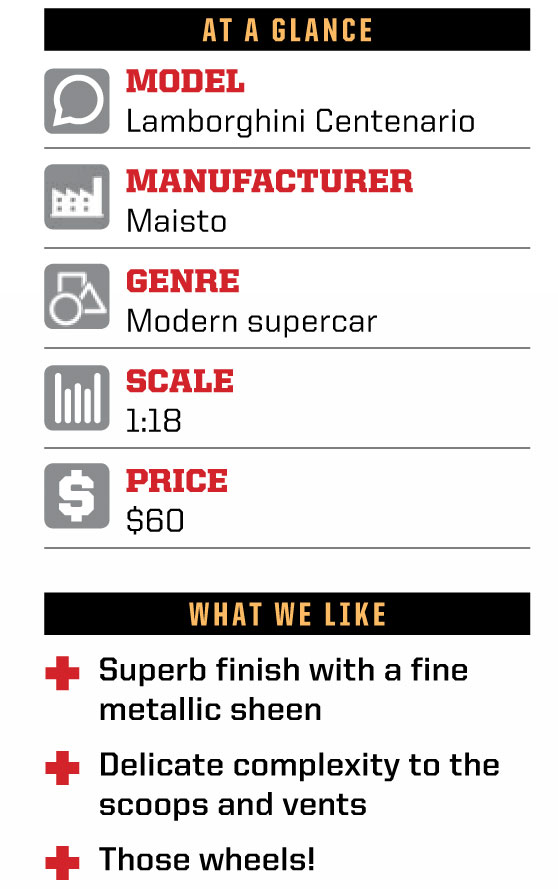 The wheels are spectacular. They feature special carbon-fiber “propellers” that help dissipate the heat that the massive brakes generate.

No one would ever mistake the Centenario design for low-key, but it is more an evolution of Lamborghini’s production cars than an over-the-top one-off. The all-carbon-fiber body has elements of the Sesto Elemento, but its dimensions place it in a larger category, in between the Aventador and Veneno. It has more complex aerodynamics than either, but it relies more on air management through and under the body, producing downforce without the need for the enormous drag-inducing dive planes and wings that encrust the Veneno. The most overt hint of that can be seen in the lower rear, where there is an extensive aerodynamic diffuser. Making more than 500 pounds of downforce at speed, and with the benefits of an active rear wing that changes angle automatically to generate downforce as needed and a four-wheel-steering system to enhance cornering stability, the Centenario is the fastest road-going Lamborghini ever—around a road course as well as in a straight line. And it is beautiful in a way previous specials like the Veneno were not. 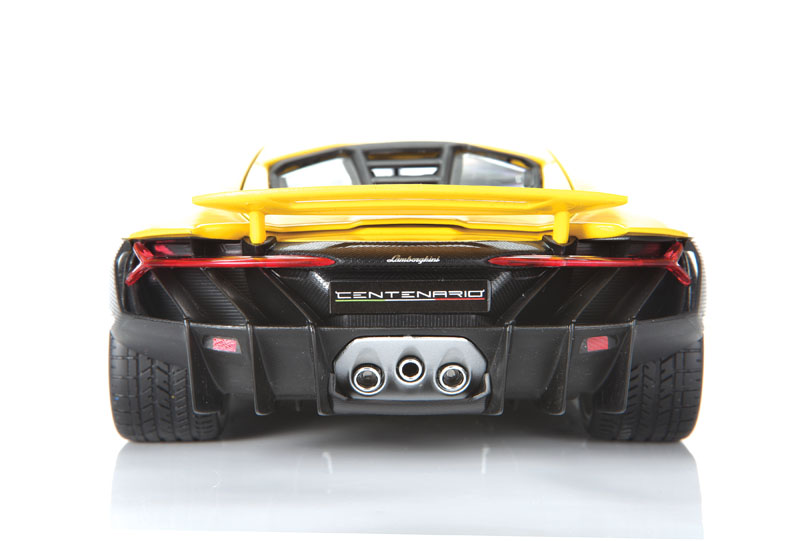 This is the most extreme angle from which to view the Centenario. Maisto does a nice job with the giant aero diffuser and the active rear wing, which help produce massive downforce without the need of radical wings or dive planes.

It’s this last item that makes it such a prime candidate for Maisto’s Exclusive Series. It’s not that a great model can’t still be made of an ugly car, but it’s so much more satisfying when the car is as pretty as the Centenario is. The sculpted body is more streamlined than other Lambos, but it’s still complex, with its copious scoops, channels, and spoilers, and Maisto shows off an attention to detail that, it must be said, has grown by leaps and bounds from its previous, more entry-level models. The company has always punched above its weight class in terms of detail per dollar, but this Exclusive Series represents a new high for the brand, and it presents much better than its $60 price tag would suggest. The paint is delightful, with nary a hint of pooling or orange peel, and just the right amount fine metallic sparkle in direct light. Maisto has made the active rear wing extendable (the 1:18 is manual rather than automatic!), but it’s a little stiff to deploy. Maisto also builds the model in its lower-priced Special Edition Series, but this Exclusive model is so affordable, why not spring for the better option? 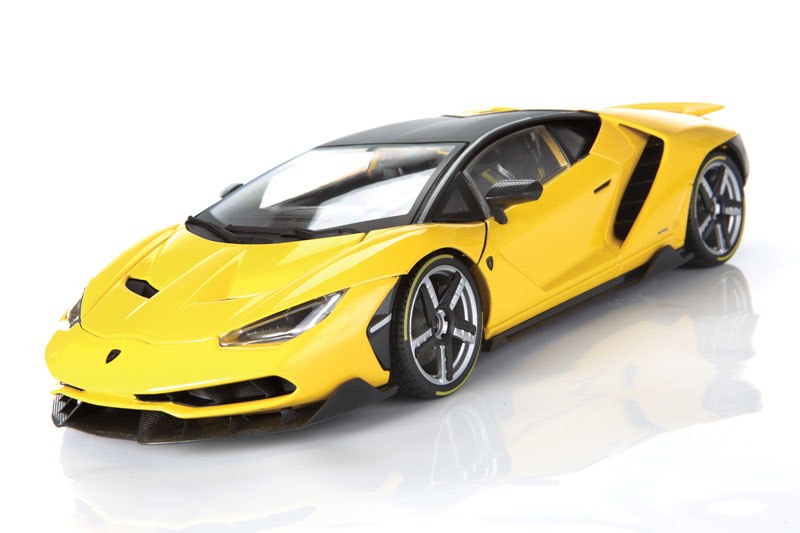 Those wheels also have odd-looking carbon-fiber “propeller” blades shadowing the spokes, which serve to pull air out of the wheel centers to extract heat from the jumbo ceramic brake discs—all details that Maisto captures delightfully.

The doors rotate up and out with satisfying heft and hold themselves firmly, but their angle makes seeing into the Centenario a bit of a challenge. Yellow highlights on the mostly black-and-carbon interior brings a welcome burst of contrasting color, and the materials and workmanship are definitely a cut above Maisto’s usual quality, with careful molding and nice detail on the instrument panel and the touchscreen infotainment screen on the center stack. About the only item that looks less than top-notch is the pedal set, which is bluntly molded and monochromatic. The front deck lid opens, but with all the complex aero ductwork and heat extractor vents in the nose, there is only the tiniest of cargo compartments. 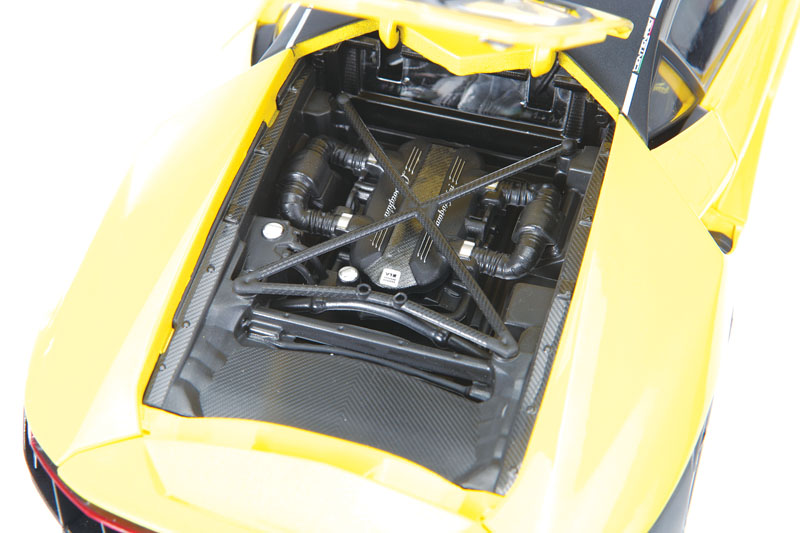 Derived from the 6.5L V-12 that powers the Aventador and Veneno, the Centenario outguns them both with 760hp. Carbon-fiber-look braces and detailed intake plumbing help give the densely packed engine bay a realistic look.

The engine cover has panels and vents in the backlight, making it look almost like scales. It rises to reveal the powerplant that is derived from the Aventador and Veneno but with advancements to squeeze an extra 20hp out of the 6.5L V-12. There’s a lot of detail in the densely packed engine bay, with chassis bracing and intake ductwork rendered in separately molded pieces. The surrounding carbon tub has realistic coloration and texture too. Nothing much can be seen of the exhaust system, save a trio of outlet pipes inset into a panel in the rear valence. 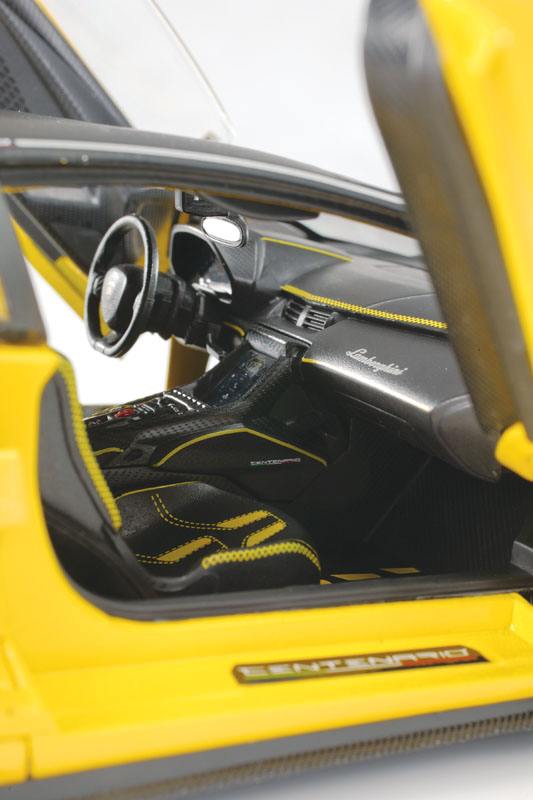 The upscale nature of the Exclusive Edition can perhaps best be seen in the interior with its striking yellow highlights calling attention to careful molding and a mix of textures.

The wheels and tires are more than just striking to look at. Although lighter than most modern Lamborghinis due to the extensive use of carbon fiber, it still weighs 3,350 pounds dry, and closer to 3,800 with fuel and a driver aboard. To keep that mass stuck to the road, the Centenario employs huge staggered wheels—20×9 inches up front and 21×13 out back—the latter wearing 355-section steamroller Pirelli Corsas specially developed for the car and recognizable by a prominent yellow stripe on the rubberband-wide 25-aspect-ratio sidewalls. Those wheels also have odd-looking carbon-fiber “propeller” blades shadowing the spokes, which serve to pull air out of the wheel centers to extract heat from the jumbo ceramic brake discs—all details that Maisto captures delightfully. 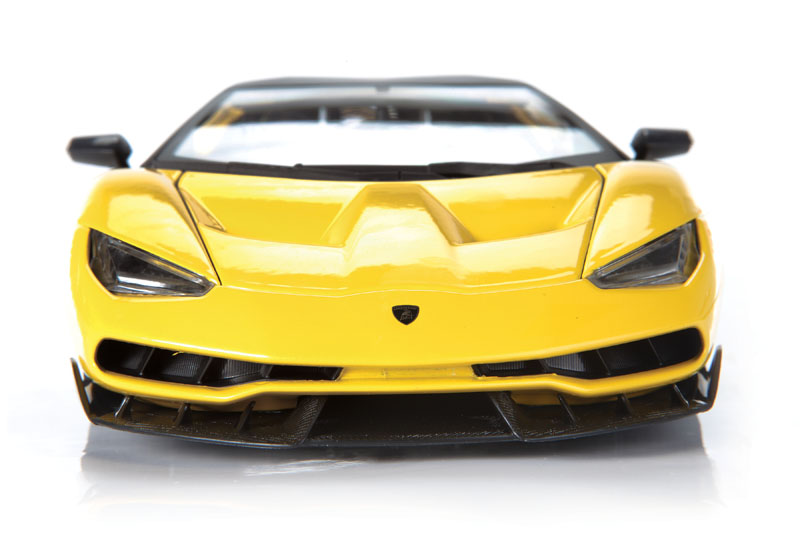 Air management under and through the body is the key to maximizing performance while preserving beauty. Maisto replicates the complex aerodynamics skillfully.

FINAL THOUGHTS
I have always been a Lamborghini fan. I’m of the age that grew up ogling the Countach as the most spectacular supercar on the planet. The company’s more recent efforts have been a mixed bag. Production models like the Huracán look fantastic, but the limited specials have, at times, looked as if they were trying too hard. For me, the Centenario is a return to form—balancing flash and class while managing to raise the performance bar to new heights. I feel as if Ferruccio Lamborghini would have approved of his company’s birthday present. And collectors will approve of Maisto’s gift to them. I love the direction the company is going by offering its models at multitiered levels of price and sophistication while overdelivering content at each level. The Exclusive Edition really is an excellent value at $60 and will sit happily alongside other 1:18 exotics costing two, or even three, times as much. You can spot its lower-priced origins in a couple of minor places but nothing that detracts from its overall appeal. Keep up the good work, Lamborghini and Maisto.