The First R8 was a First Rate Race Car

The Audi R8 is one of those exotic cars that you swear you could actually own someday. In a world of Ferraris and McLarens that crack the half-million dollar mark, a new R8 is a relative bargain, and it comes with a racing pedigree that outshines those other makes. Of course, tracing that “racing pedigree” gets a little complicated. The LMP (Le Mans Prototype) race car Audi called the “R8” wasn’t mechanically related to the production car. The road car came later and borrowed some technology from the race cars, but they didn’t really overlap in time. 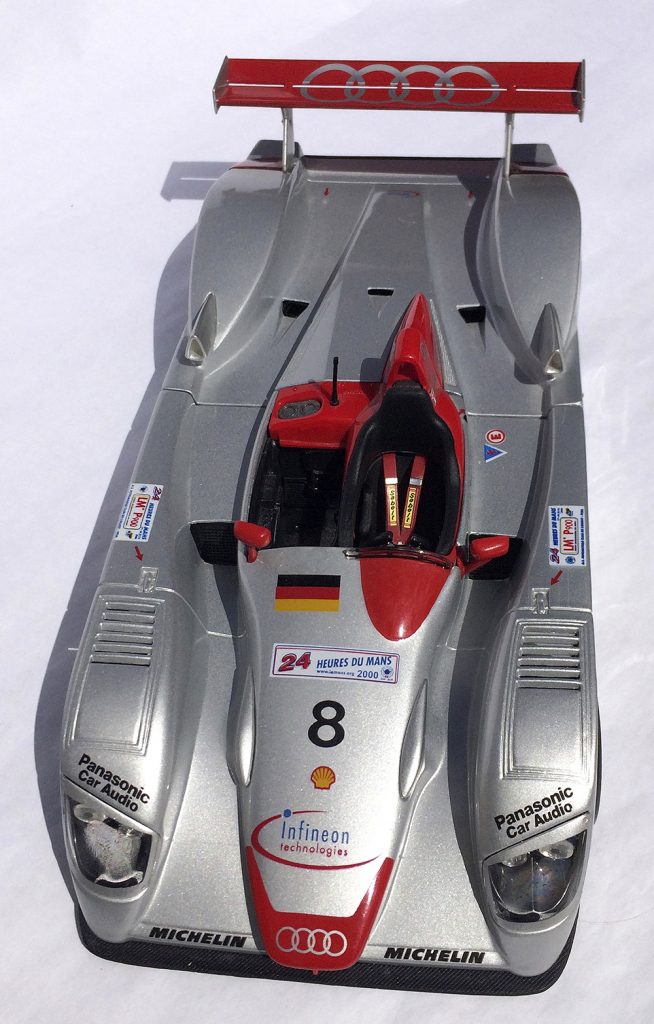 LMP class specs include some curious requirements, such as a passenger seat in the car — or at least room for one ( and a tiny one at that!) In theory, these cars are based on production cars, and as modified as they are, they have to retain some semblance of being a proper passenger car. At one time, that relationship was intact. But like with other production-based series like NASCAR, the idea of what constitutes “production-based” has changed over the years to the point that the designation is more tradition than anything meaningful. The R8 LMP took the Endurance world by storm, sweeping the top three spots in the 2000 Le Mans 24-Hour. In fact, an R8 would win the 24 Hour race three years in a row, ’00-02, and then again in ’04 and ’05. It did even better in the U.S., winning the American Le Mans Series in 2003 as well.

This 1/18 model from Maisto represents car number 8, driven to the 2000 victory by Frank Biela, Tom Kristensen, and Emanuelle Pirro. Their names and national flags appear in tiny print on the headrest/roll bar assembly. It’s remarkable how low and purposeful the car looks (aside from that useless extra seat). There is very little space around the wheels, and indeed, no functioning suspension on this model, since the set up on the real cars was super stiff anyway. The steering does work, however.

The German Racing Silver looks perfect on this car, and there are a few flags painted on it to remind you of its origin in case the color doesn’t give it away. There are lots of small sponsor decals and red arrows indicating where latches and safety switches are located — a nice touch for this sort of car. Just so you know it’s indeed the car from the 2000 24 Hours race, it wears several signs to tell you. And on the floor of the car, where the non-existent passenger seat would be, there is a tiny map of the Le Mans course where the driver can see it. 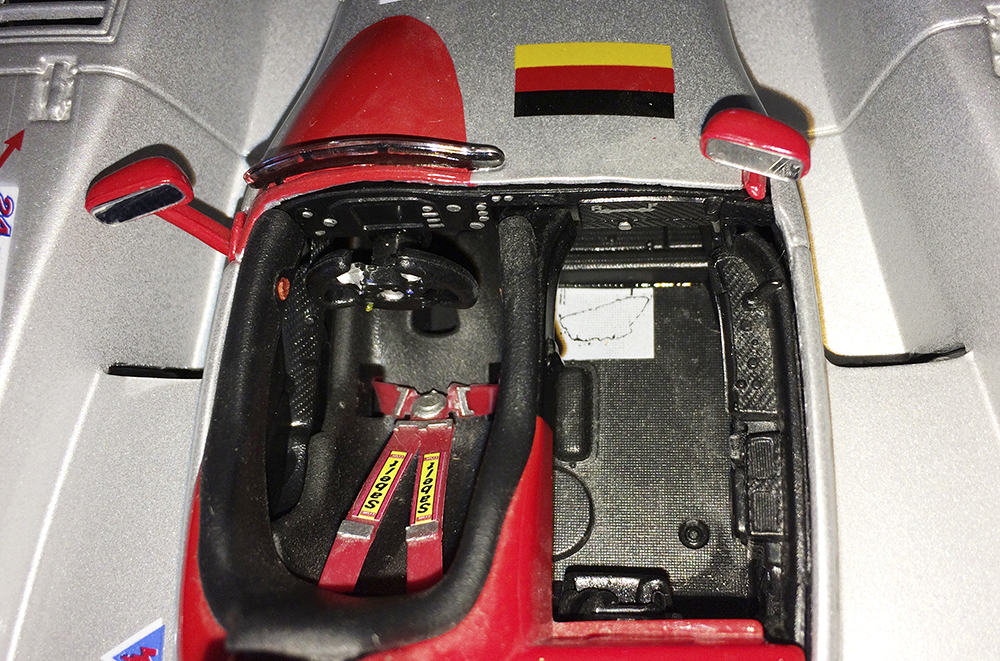 Lots of care went into details such as headlights, taillights and mirrors — each consisting of multiple parts. The rear cowl is removable, and the twin-turbo V8 has a very detailed, almost sinister look. Amazingly, the entire power plant is lower than the top of the tires, and the colorful array of intake and exhaust tubing, plus various wires and other plumbing snake around wherever they can fit. There is also considerable detail on the suspension which uses the gearbox housing as a stressed member. If you look inside the cowl piece, the entire inner surface is etched in a pattern to simulate carbon fiber. Also of note, there are tubes to connect the outer vents and ducts to various locations on the chassis. Several of the vents and ducts on the car are open. 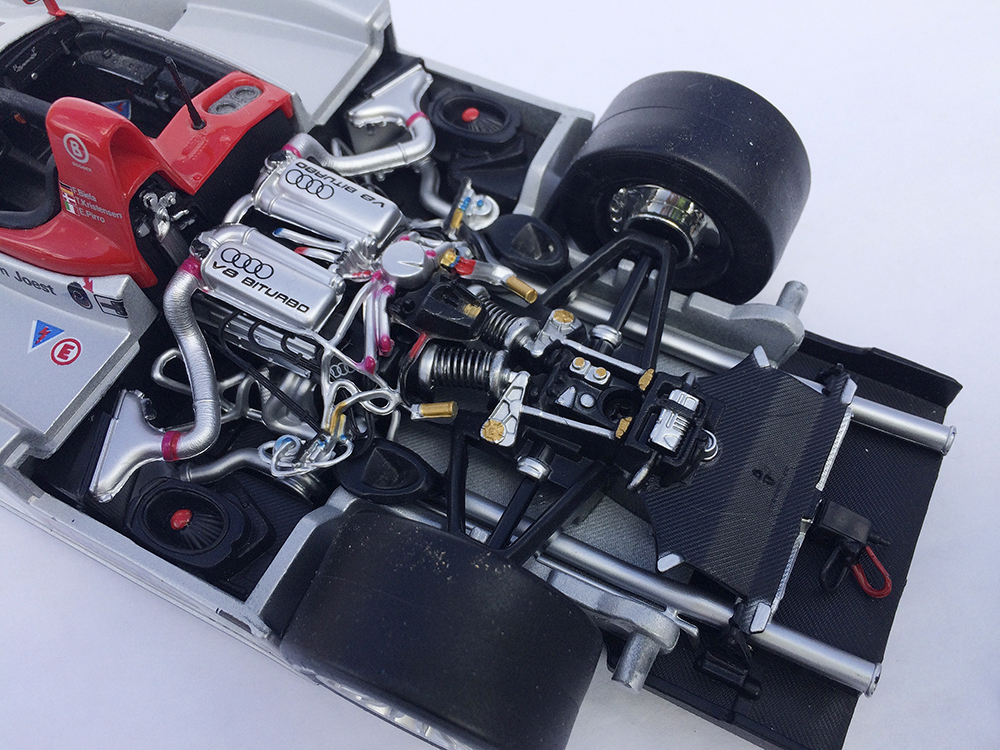 While the chassis and suspension detail is pretty good from the top, the R8 has a flat aerodynamic undertray that makes the bottom of the chassis almost featureless except for the carbon fiber texture again. It sits realistically low — so much so that the molded attachment points for mounting the model to the base rub the ground when you roll it! 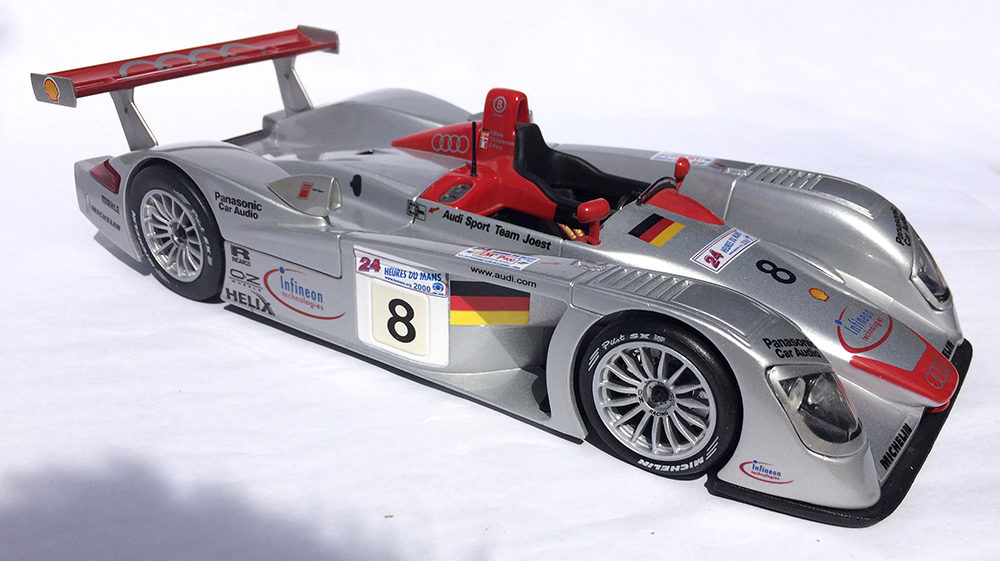 Maisto really went all-out on this model. There are versions of the R8 from later races and years, complete with slightly different winglets and decals as required. But it’s hard to beat this particular example — in full scale or 1/18 — as it represents the beginning of one of the R8’s dominance.

[Ron Ruelle is Social Media Guy at hobbyDB.com, a website about anything and everything collectible.]