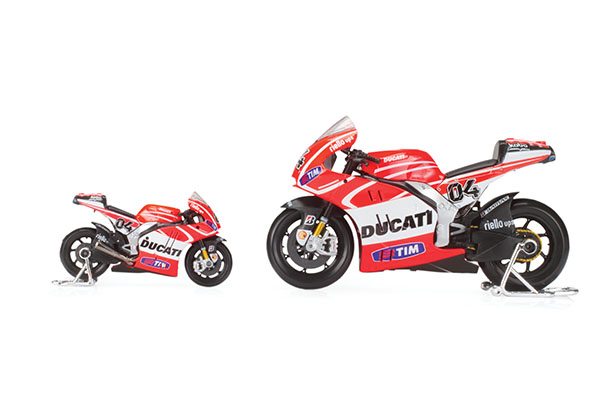 The beginning of the 2013 Moto GP race season started a new chapter for rider Andrea Dovizioso. After three years riding factoryHondas, then one more year on a Yamaha, Dovizioso was hired by the factory Ducati race team to replace Valentino Rossi on their Desmosedici GP13. Dovizioso spent the 2013 season learning the machine and placed 8th overall at the end of the season. So far this year, Dovi has been pushing his and the Desmosedici’s limits.He currently sits 4th in the championship, just 42 points short ofRossi in 3rd.

Maisto got together with Ducati to bring Dovi’s 2013 Desmosedici GP13 to collectors in two scales, 1:10 and 1:18. As you might expect, the larger of the two scales is more visually appealing, although the detail between the scales remains pretty consistent; the smaller of the two not giving up much. The front forks on the smaller scale look a little short, making it appear as ifthe front suspension is fully compressed. Some flashing remains on the seat pads of both models, and also on the rear tire of the 1:18 version. The rear track stands can be removed, but are needed if you wish to display the models upright (no side stands aremounted on either bike due to their racing nature). Both models feature articulating rear suspensions and steering, but fairingscover most of that 1000cc, 16-valve Ducati V-4. If you are a fan ofAndrea Dovizioso, or simply love the beautiful, flowing lines of the Ducati Desmosedici, one of these models should be in your collection. —Pete Celona