It’s no secret that Maisto has become the benchmark for entry-level 1:18 diecast. We regularly applaud the brand’s high content-to-value ratio and the tiered structure of its product lines, which allows novice collectors to gradually move up in price and detail within the brand they know and trust. The company has an extensive library of castings. Traditionally, we think of Maisto as specializing in models of modern performance cars, but the company has a surprisingly diverse selection of classics too. One of its newest cast­ings should warm the heart of any muscle-car enthusiast: a 1969 Dodge Charger R/T.
Maisto has done some classic Mopars in the past, but a ’69 Charger is in a different league in terms of appeal. It offers the model in a couple of colors: traditional black and the bright orange you see here. If it were a ’68, we would have chosen black, but for a ’69, how could we not go with orange? The paint is smooth and even, and the black bumblebee R/T stripe on the tail provides a nice contrast. The drip rails and wheel-arch trim are painted on, and there were a couple of marks where the trim paint was rubbed
off by the rubber band that secures the hood during shipping. Notably, Maisto chose to mold
the roof section out of plastic rather than as part of the metal body. That opens up an interesting opportunity down the road. With a different roof mold, a nose cone, and a wing, this casting could easily be adapted to a 1969 Dodge Daytona Charger.

The doors use clip-style hinges that are a much lower profile than doglegs, and allow the doors to open nice and wide. The door interior moldings are a bit thick, but it’s only noticeable when the doors are open. The steering wheel, dash, and shifter are well molded and positioned, but they lack proper coloration. Our sample was preproduction, so perhaps the woodgrain and chrome will be added on final versions. The paint under the hood, though, is spot-on, with Mopar engine orange on the big 440 Magnum. Maisto took the time to mold radiator and heater hoses; that’s unusual for a model this inexpensive but very welcome. Wheels are chrome renditions of the muscle classic Magnum 500. The wheels look pretty accurate, but the tires are a little chunky and fill the wheel wells a bit more than the stock F70 tires did. Maisto includes functional springs, and the Charger settles nicely on them, giving it a sporty stance. 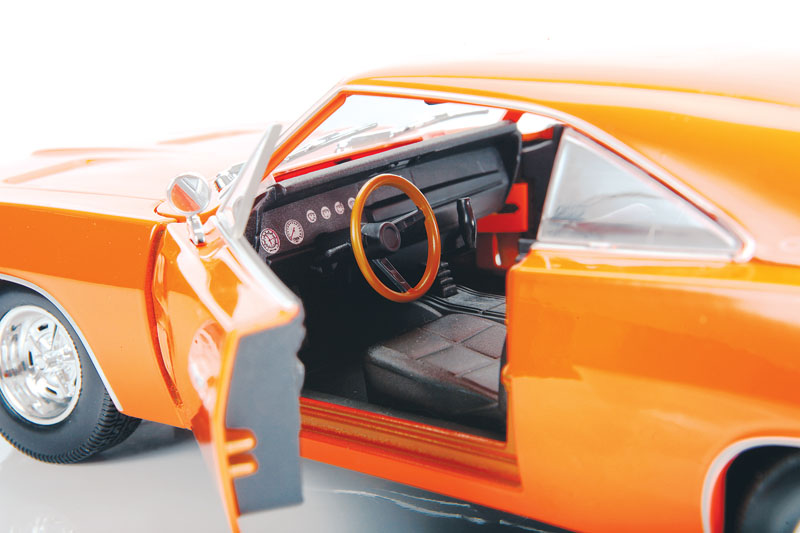 The Charger has a pistol-grip 4-speed and well-molded wheel and seats. All Maisto’s interior needs is a little paint. 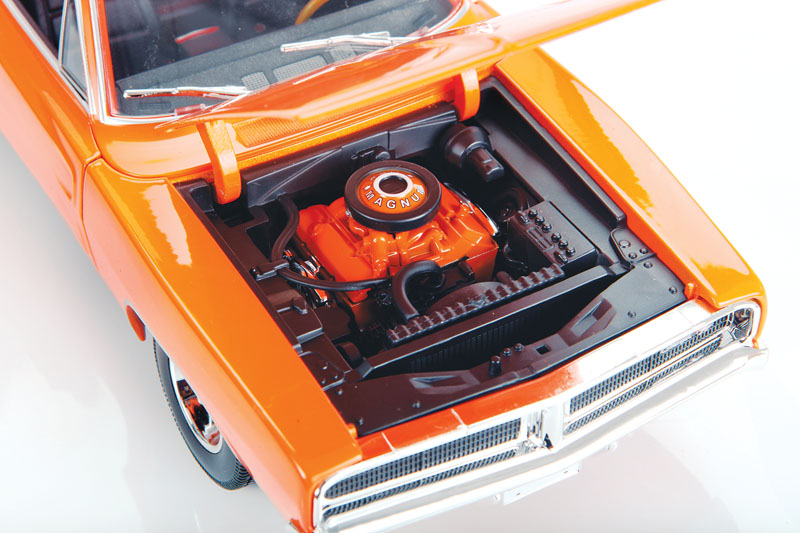 In a diecast world of ever-escalating prices, it’s really nice to have a brand like Maisto in the game that keeps prices in check while continuing to deliver new and interesting cars from multiple genres. For new collectors, it’s the perfect company to start their collections with, and it’s great for the rest of us to fill in missing cars or expand into new categories. All muscle-car fans should have at least one ’69 Dodge Charger in their collection, and Maisto’s is a fine piece to start with.

By the DCX crew