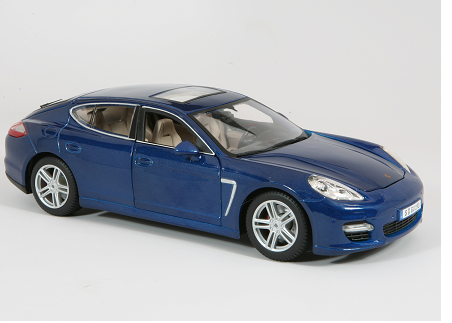 It was in 2009, at the Shanghai International Auto Show, that Porsche stepped outside their own domain as the lords of the rear-engined high performance sports car to herald the release of their front-engine, rear-drive four door sedan, which they called  the Panamera. Porsche had tried alternate markets before; the equally left-field Cayenne had tackled the burgeoning SUV segment, but the Panamera was aimed squarely at the luxury performance sedan niche, and it brought heavy guns to play. With optional power sufficient to overwhelm almost anything on the road and handling to match, the car’s styling and dynamics were super-sized, but the vaguely amphibian shape and road-going soul was pure Porsche – and the debut was a resounding success.

Maisto’s Premiere Edition Panamera offers well detailed accuracy inside and out, for not a lot of money;  we were taken by the well replicated “split five spoke” wheels, sporting rotor and caliper detailing. Opening the front doors reveals a well replicated two-tone interior; the finer details on the dashboard and full length center console are reproduced to a remarkable level for the model’s price point. A peek under the rear hatch reveals an operable molded cargo cover and additional interior detail; go forward and the Panamera’s top-rung 500-hp 4.8 liter turbo V8 is replicated in a “clamshell” casting that’s been paint and tampo detailed.  All in all, it’s a chance to enjoy a bit of exotica for a comparative pittance – something Maisto’s been delivering for a long time. 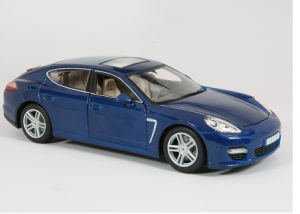