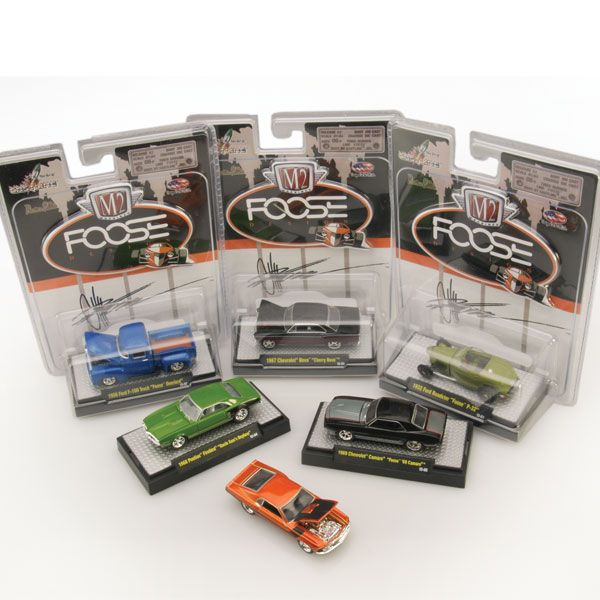 M2’s Chip Foose Design collection had us at “hello” in its first release. The six cars were all related either to the master designer/builder’s career, or episodes of his Overhaulin’ TV show. Now, the cars are back, in secondary colors for release two — and we’re liking them all over again. Suckers? Hardly. These repaints are true to what Foose did with each machine to start with, done in alternate hues. The best part is that these finishes have been applied beautifully to the cars, and the decos, including the striping and color separations, are faithful to the originals and are really well done. The six car set includes the 1932 Ford “Foose P-32” roadster, the 1970 Ford Mustang “Gambler 514,” the 1967 Chevy “Cherry Nova,” the 1969 “Foose ’69 Camaro,” the 1968 Pontiac Firebird “Uncle Sam’s Nephew,” and, of course, the 1956 Ford F-100 “Overlord.” Each has separate headlight lensing (where applicable), an opening hood and well-detailed engine and interior, and comes on a diamond-plate plastic base. If anyone was going to overhaul this lineup, M2 was. Hello, again. — DCX Staff