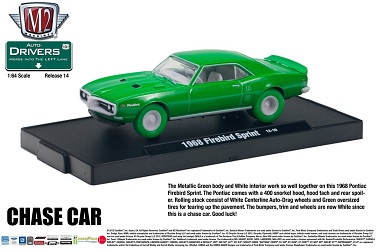 Thanks to M2, collectors are about to go on the search again. Auto-Driver release 14 is on its way to your favorite mass market retailers and hobby suppliers world-wide.

You’d think that after fourteen releases, M2 might be running out of ideas. Nope. The inspirational juices are apparently still flowing at the M2 design tables, and the cars and trucks –  a 1969 Dodge Charger Daytona packing some serious HEMI power, and a 1949 Mercury Custom with large, yet well-proportioned tires out back (making everyone wonder what’s hiding under the hood) are joined by a 1950 Studebacker 2R Truck with a classy “ten” interior and a set of Dragmaster wheels. The 1968 Pontiac Firebird Sprint rolls with a 400 snorkel hood, hood tach and a set of centerline Auto-Drag wheels, and the Daytona’s cousin – a HEMI powered 1969 Plymouth Road Runner – is followed by an older Mopar, a classy, classic 1957 Chrysler 300C Street Rod.

Hey? What are you waiting for? These are expected to hit the pegs at Wal-Mart any day now – and they won’t last long. 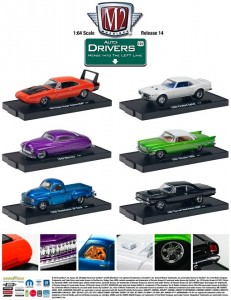