Sean Taylor and the rest of the team at M2 Machines is at it again, as series 18 of their popular Detroit Muscle line gets ready to cruise into mass retail and hobby shops worldwide. Four of the six models in the series are reappearing with new skin colors;  however, for you classic muscle car fans two new castings will make their debut.  The first is a 1968 Mercury Cougar XR-7G,  finished in high gloss black with black vinyl top.  It sports a very rare factory sunroof, a special hood, and factory fog lights up front. Power is provided by the new-for-1968 302 V8. Handling comes via Goodyear Poly Glas tires, wrapped around the rare (and recalled for safety) Radir wheels. The second is a 1969 Chevrolet Camaro Z/28 RS in Hugger Orange with white Z/28 stripes. Options include a black interior, a cowl induction hood, a rear spoiler, a rear bumper with bumper guards, an RS grille in the open position and RS tail lights. The high-revving 302 engine sends power to Chevrolet Rallye wheels, also shod with Goodyear Poly Glas tires. Keep an eye out – these are coming soon. 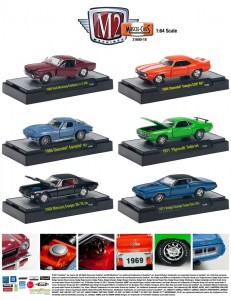