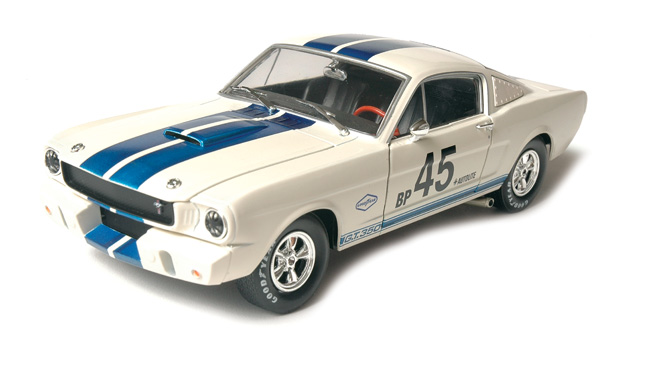 The image/legend of the Shelby GT350 is as storied and vibrant as any car’s in history. Likewise is the desirability of rare machines. Throughout the decades, the interest and admiration for the Shelby version of the basic production Mustang has reached a fever pitch. As part of its expanding line of 1:24-scale offerings, M2 Machines has released the Shelby Mustang that was the closest to being a race car with license plates—the 1965 GT350R. Equipped in BP (class B Production) trim, this is an example of how easy it was to take a street Shelby and put it on the race course. The fit/ finish of this diecast is remarkably good considering it sells for around 30 bucks. Of special note are what may at first appear to be blemishes on the lower rear panel. But those are the mounting points for the rear bumper, removed once the car was driven to the track. The simulated electrical tape on the headlights is nice, too. A detailed 289cid V-8 is above the price point as is the interior with twin racing bucket seats and a four-point cage. Side exit exhaust features red “Cherry Bomb” glasspacks—very period correct. Raised white-letter Goodyear tires and chrome American Racing-style wheels finish the street/comp Shelby.