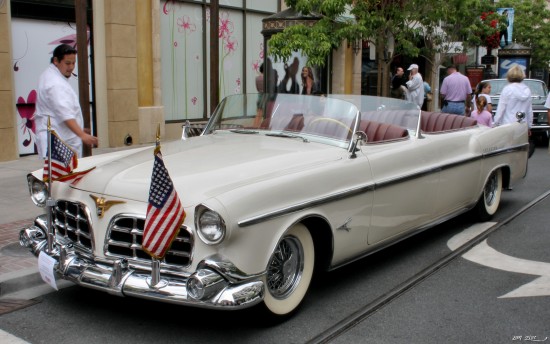 Back before a certain November morning in Dallas, the idea of a presidential parade usually included a glimpse of the Commander in Chief, either seated in, or standing and waving from, a special parade car. If not the leader of the free world, then beauty pageant winners, television personalities, or foreign heads of state got to cruise in these machines. Chrysler made three such cars for special events in 1956, and they were classic dual-cowl phaetons, with a driver’s compartment up front and an open rear section for luminaries. Detroit got one; so did New York and Los Angeles.

Of course, things changed in 1963, and Presidents and dignitaries (wisely) started waving from behind the bulletproof glass installed in their own specially-equipped limos – if they waved at all. That’s the reason Legendary Motors’ upcoming 1:43 series of 1956 Chrysler Crown Imperial “Parade Phaetons” are such a poignant homage to a more trusting time in our history, as well as a salute to old school collectibility. Done in substantial white metal, with polished paint and impressively detailed trim and interiors, these hand-built cars will be offered in limited editions of only 50 of each of the three authentic colors Chrysler built the originals in: New York City’s Raven Black, with a red interior; Detroit’s Cloud White, with a red interior;  and Los Angeles’ Stardust Blue (of course), with a white seating area.

The cars are being offered at $395.00 each. Contact Sinclair’s Miniauto for details. You can wave, if you want.