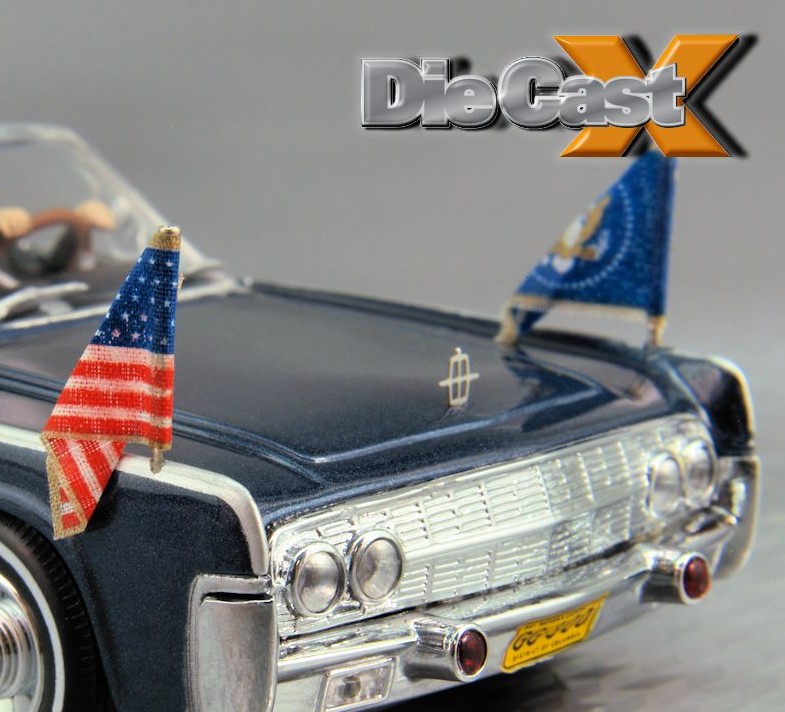 As we celebrate Thanksgiving, we must also take a moment to remember another American moment – one not so happy – that happened on this day in 1963.

It’s not very often that a model causes controversy. But when Minichamps  released a replica of President John F. Kennedy’s 1961 “X-100” Lincoln – replete with figures of the President, Mrs. Kennedy, Governor and Mrs. John Connolly, and the Secret Service drivers, all exactly as they appeared in Dallas, Texas on November 22, 1963 – the hobby took notice.

It’s easy to see what the talk was all about. Impeccably painted and detailed, the lengthened Lincoln comes mounted to a clear-topped display base, with historical data printed below and behind. Neatly placed items like rippling fabric flags, a delicate parade bar, and the tiny Continental star on the car’s hood are exactly right, precisely scaled, and the kind of things that make a model like this so engaging.

Of course, it’s those figures that steal the show – and draw such strong reactions. The passengers of the car sit in relaxed, familiar poses, oblivious to what lies just ahead. The effect of the visual can be unsettling, as if lifted from a single, grainy frame of the Zapruder film.

Some see this creation as a carefully, respectfully crafted memento. Others feel too strongly about the subject matter to have the model on their shelves. Regardless, the car’s detail, including the red lenses in the front bumper, the steps and grab handles out back, and the fastidiously decorated and realized dash and interior spaces, make Minichamps’ effort apparent.

It’s a moment many Americans wish they could erase, but one that marks an indelible moment in history. Originally sold at around $80.00 (and also made available in “LBJ Quick Fix” and “Berlin, 1963” variants), the remarkably rendered model is infrequently available on the secondary market, at a premium. Rest in Peace, Mister President.