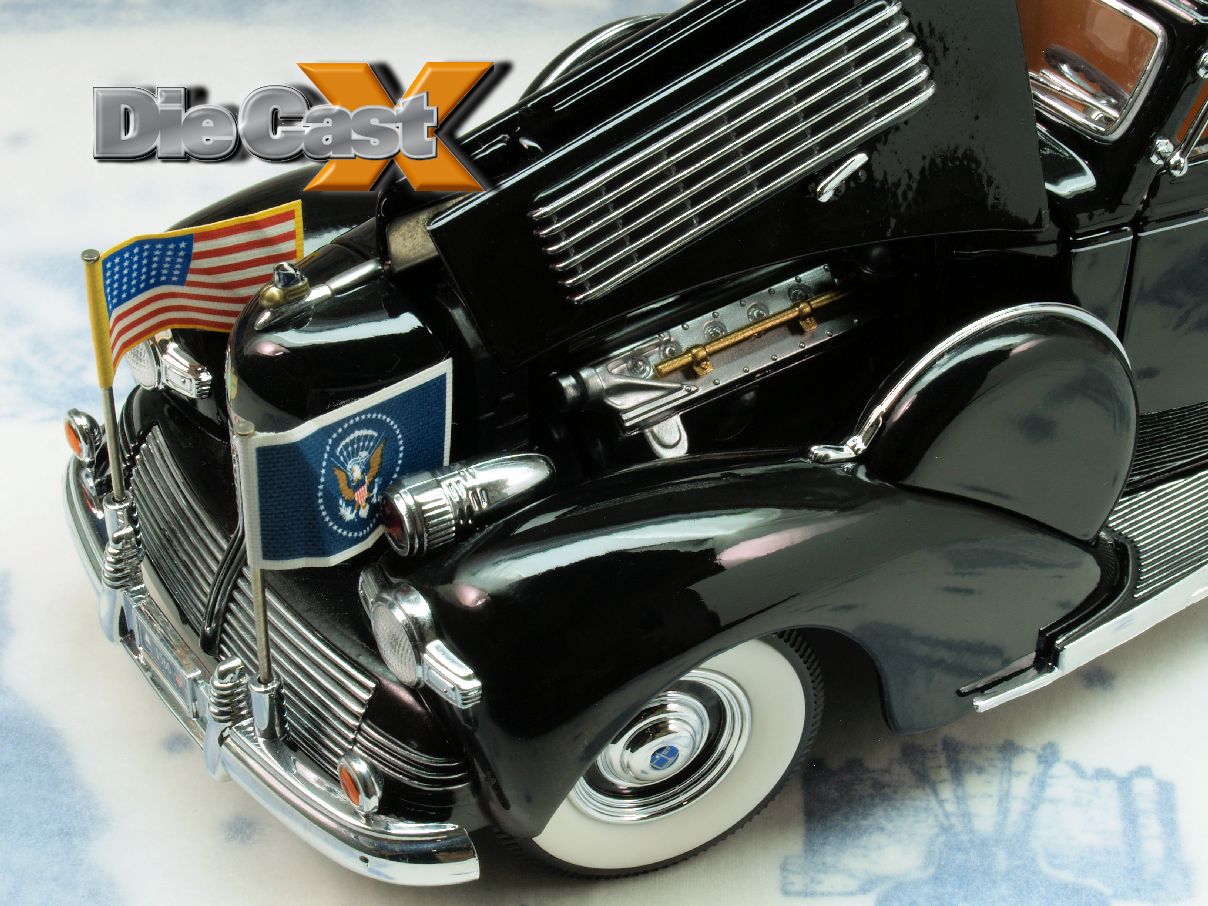 In case you’ve been dozing ‘neath the bituminous for the past several months (or you think those debates on TV are some kind of new reality show), we’d like to remind you that we’re gearing up for an election. For the really big job. As in, President of the United States.

It’s with that in mind that we present these 1:24 “Presidential Series” limos from Yat Ming. As part of a marginally upmarket lineup pointed at Mint-slanted collectors, Yat Ming catalogued nine cars, starting with the 1938 Cadillac V16 that Franklin D. Roosevelt, Harry S. Truman, and Dwight D. Eisenhower all used while in the Presidency, and ending with the 2001 Cadillac that George W. Bush rolled out in. In between are a 1939 Lincoln, a 1950 Lincoln, a 1956 Cadillac, Kennedy’s 1961 Lincoln (and another, “Quick Fix” take on that car, as refurbished after the horrific events of November 22, 1963), a 1972 Lincoln, and a 1983 Cadillac. With the exception of the late-model Caddy, all spent many years in the White House motor pool, and were much loved and very well used by the time they were respectfully put out to pasture.

Pasture, indeed; most of the cars are currently behind ropes at the Henry Ford Museum, and the models we see here tell of special access granted and many hours spent getting the big stuff right. All of the major opening panels operate on dog leg hinges, and the interiors, trunks, and underhood details are there – not to any breathtaking degree (after all, these cars marketed at a sub-$40.00 price point), but via decently tooled castings that have all either been cast in color or painted. And this will most probably be the end of the run. Upon retirement, any current and succeeding Presidential cars, including Barak Obama’s one-off “Beast” Cadillac, will be dismantled and used for “testing” in secret.

The secondary features on these little barges are fairly cool; folding jump seats, tilt-out handles and perches for the Secret Service in the bumpers and trunk lids, a folding windscreen on the “Sunshine Special”, and the secret compartments concealing shotguns all offer insight into the way these cars evolved from parade floats into something resembling four-wheeled fortresses. Contrast the thin plastic bubble top on Eisenhower’s Lincoln Cosmopolitan with the beefy bulletproof tires and mile-thick glazing on the latest in the line.

They may be budget offerings, but looking past the price point to the carpeted floors, decent paint and chrome, and accurate scaling and shapes makes these rolling miniature pieces of American history well worth having. Still on the market, if you poke around, at or below their original prices. Hail to the cheap.