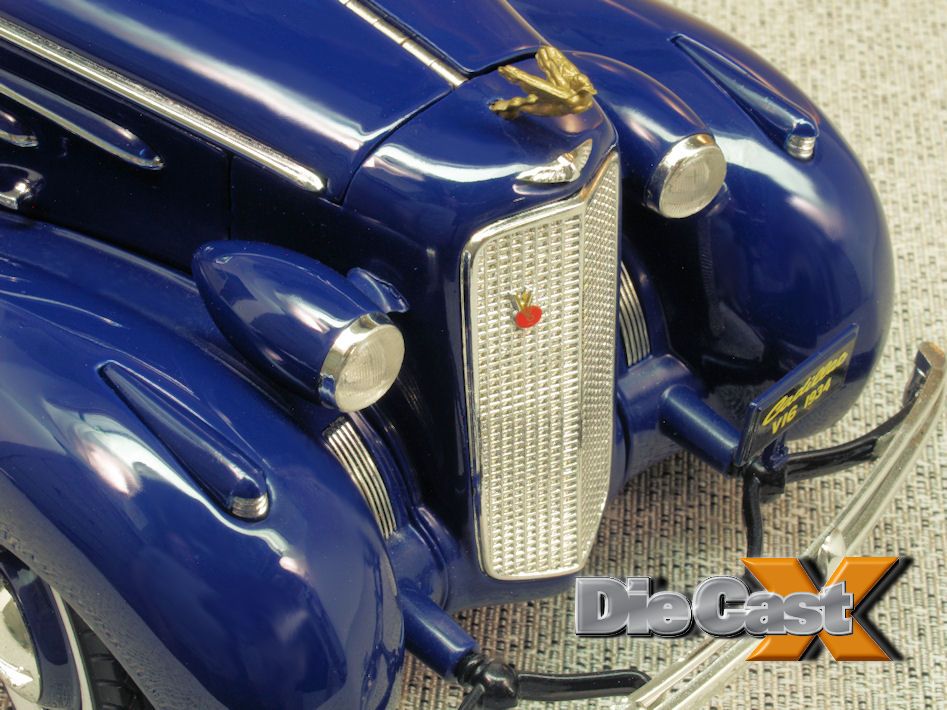 A few years ago, Ricko (or RickoRicko, if you want to be picky picky) was a little known German company that was being distributed in the U.S. in fits and spurts, which was a shame. They actually had a few neat, fairly inspired images in 1:18, including a wee BMW “Dixi” sedan, a substantially more imposing 1934 Lincoln“K” phaeton, and this truly huge 1934 Cadillac V16 “Aero-Dynamic Coupe”, patterned after the larger-than-life show car that Harley Earl had twisted up for the Chicago World’s Fair in ’33.

At close to three and a half tons, the real car was a giant; at around thirteen and a half inches long, the model is an equally impressive sight on display, with all of Earl’s swooping, sweeping profiles accented, as in life, by well-placed chromed strips and streaks on the hood and fenders. The paint on this sample, which was purchased sight unseen back in 2004 from a retailer in another state for around seventy bucks, proved to be very good – a not uncommon occurrence with products from this maker. Ditto the chrome and overall build, with only the too-bright grille and a cast rubber hood ornament (you read that right; the Caddy’s golden flying lady bends) taking away form the car’s presentation.

It’s no curbside queen, mind you; the model’s opening doors, hood, and trunk, steerable wheels, and working (though tight) suspension made the car a contender in the contemporary wave of mid-priced ’thirties American images from 1:18 makers like Motor City Classics, Signature, and RC2. The butterfly hood is piano hinged, and the doors swing on pin hinges; the former lifts to display a neat V16, and the latter a carpeted floor and well-turned dash. Only the unpainted door panels and bare beige PVC seats detract from the cabin; go south, and there’s an opening trunk with a stowed spare under a carpeted, lift-up panel.

Go farther south and the frame and drivetrain are repped in a deep plastic casting that represents the car’s foundation well enough; as with many of the models sold in this bracket, Ricko’s focus as a manufacturer seemed to stay with what could be seen on the shelf, not what lived beneath. In that regard, despite the spotty availability (and resulting premium that some retailers asked for these), this is a truly unique image that’s been appearing on the secondary market less and less as time goes by. If you like your models big and interesting – and you’re not too picky picky – you might want to poke around.