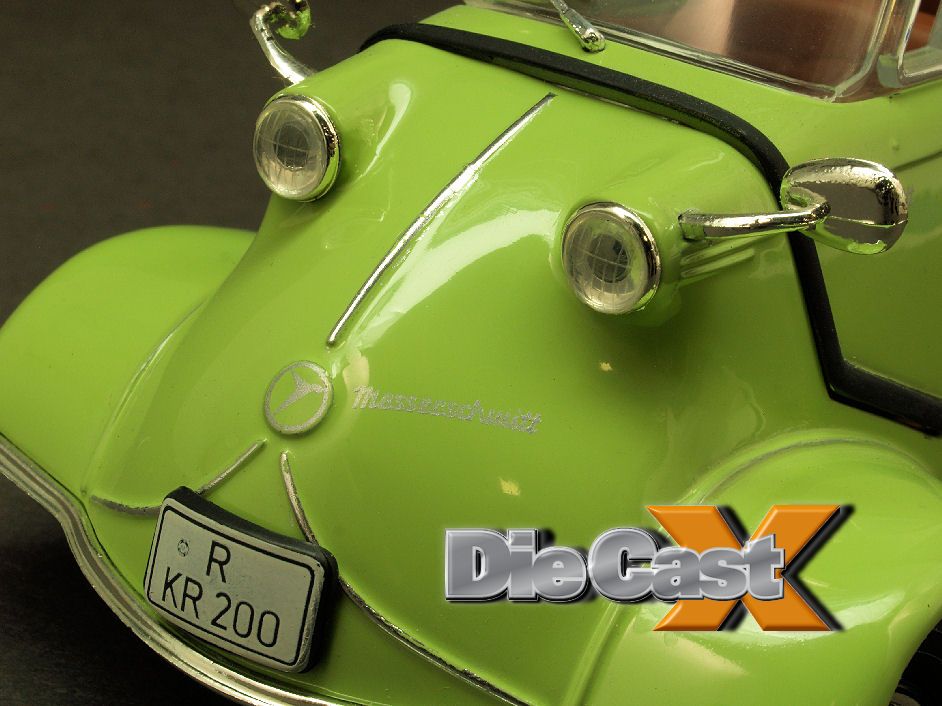 Park the Prius; unplug your Volt; use those do-it-yourself fuel cell plans you just bought for the Mini to spark up the backyard barbecue. All that physics-stretching, newfangled technology is namby-pamby stuff. If you want to make mileage like they did in the old days, think microcar.

These ’fifties-era spawns of the European postwar economy have long been a favorite with a dedicated subculture of collectors, and they’re a quirky lot, to be sure. But few could hold a candle to the likes of the canopy-crested Messerschmitt KR200 of 1955-1964.

Designer Fritz Fend called the little flip-top three-wheeled toboggan-for-two the “Kabinenroller”, but around 40,000 paying customers called it the family car; for a price of around $600.00, it offered an electric starter, motorcycle-style steering, and the ability to move in reverse. This last feature didn’t happen in the traditional, geared-in sense. To retreat, you had to stop, then re-start the 10HP, 191cc two-stroke engine backwards, via a special ignition key detent. With four speeds on board, top velocity was an eyeball rattling sixty miles per hour, with a delivered fuel economy in the sixty to eighty mile per gallon range. Take that, Tesla.

Revell Germany tooled up a 1:18 model of this extreme micro in the mid-’nineties, and it’s a real conversation piece. With a tilting canopy, a lift-up rear and steerable wheels, it’s well detailed, despite being built off of a relatively simple set of castings. The overall quality is good, if a little loose-hinged here and there. Foil strips and tamped-on decos mark the body, and the add-on pieces for the headlights, taillights, and body hardware nail the vaguely amphibian look of the little ‘Schmitt well. The cabin is neat – and surprisingly spacious, if only for two. Whonk the handlebars and the front wheels whip from side to side; keep the canopy up and lift the rear for a look at the one-lung Fichtel & Sachs AZL-R motor driving the single rear wheel, with a stowed spare tire – on an 8-inch rim – stashed above.

You can still find these as new pieces, if you do a bit of digging; once you’ve hit pay dirt, you’ll need to dig a little more. Recent KR200 finds ran from $60.00 to close to $100.00, before shipping. Like micros? While you’re Google-ing, check out the Goggo – as in Goggomobil, a microcar contemporary to the KR200 – that Revell Germany also offered. Small is sweet, in scale.