An Uncommon Scale Tribute to an Extraordinary Hot-Rod Project Truck

All car enthusiasts have experienced that moment when you see a vehicle that utterly consumes you and you become obsessed. Sometimes it happens with a brand-new model, but often what does it is something that’s one of a kind—a show car or custom build by someone whose vision perfectly aligns with your own sense of style and aesthetics, and it captivates your imagination. If you are a collector of diecast (and if you’re reading this we are going to assume you are!), that often sets off a frantic search for a scale replica of the object of your obsession. But by its nature, a custom build is unique, and that means the chances of it being translated into a commercially available model are scarce at best. But if you’re sufficiently motivated—and you happen to have master-level diecast customizing skills like Giannis Logaras—then perhaps you can re-create your own scale tribute to that object of your automotive obsession. That’s exactly what Giannis did with the truck you see on these pages, which he dubbed “Long Shot.” How it got that name and how it came about is quite a tale, and we’ll let him tell it and then he’ll share his insights into how he built it.

The Story behind Long Shot

It was before the SEMA [Speed Equipment Manu­facturing Association] show in 2016 when I first saw pictures of a hot-rod truck that just left me stunned: the amazing 1939 Plymouth Air Radial Truck (PART) build by Gary Corns and his family at Colorado Auto & Parts. It was later featured on Jay Leno’s Garage and appeared on the cover of Hot Rod and numerous other magazines. The themes that it brought together—the prewar truck design, a radial engine, the polished metal finish with rivets, the whole WWII aviation look—was a tremendous source of inspiration. I knew, then and there, that I had to make my own version of it. I’ve built lots of custom 1:18 projects over the years, and I decided this truck would be my inspiration for entering a ‘’Build Off’’ competition being held by the 1/18 Die­cast Junkies group. All entries had to be completed within just 90 days—the perfect opportunity to push myself to build what I had envisioned. 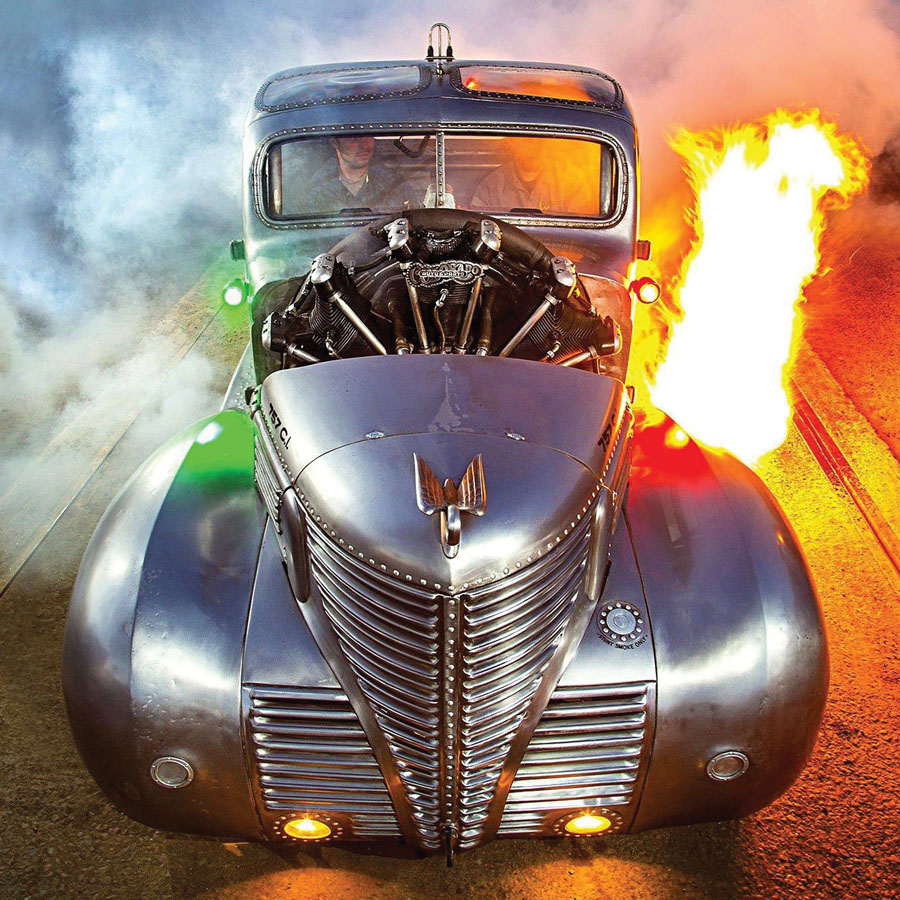 No one makes a Plymouth truck of the appropriate vintage in 1:18 to use as a basis, but I felt that the Solido 1946 GMC captured much of the same feel, so I went with it. But I had to solve some big problems along the way. The first was to find a detailed radial engine in the correct scale. Then there was a ton of bodywork to do, including the brushed-metal finish with thousands of rivets on it—plus, the transfer case and geometry challenges, not to mention the complete custom setup for the interior, bed, and chassis. And before all that, I had to read up on radial-engine mechanics and aviation technology to understand what I was going to attempt to re-create. 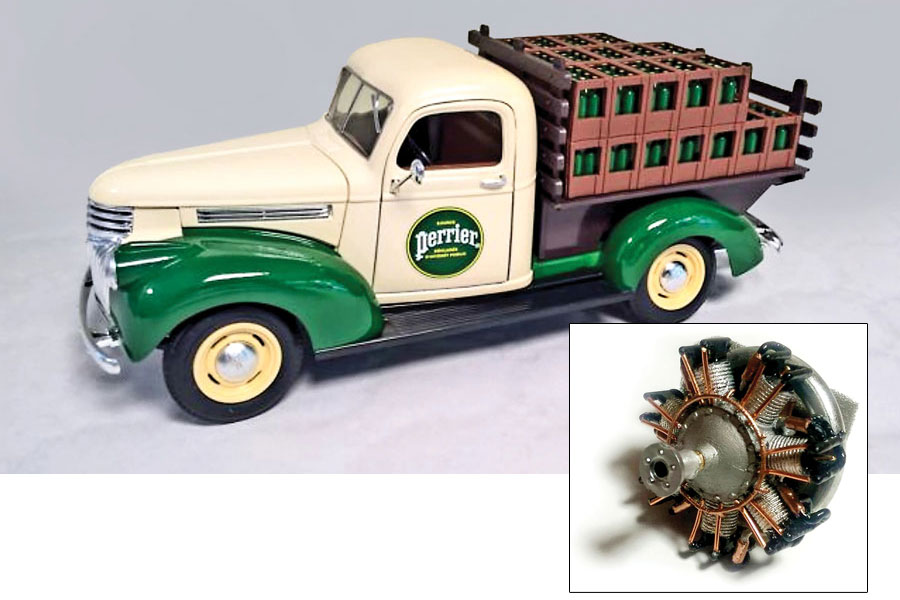 To get the bodywork underway, countless mea­surements were required. Then the cutting started: first, twin holes in the roof, then removing the headlights (to be melded into the grille later on) and positioning the taillights. The biggest cut was the hood, but tubbing the rear was also a lot of work, as was fabricating air and oil tanks out of 1:18-scale propane tanks from American Diorama. I borrowed Shelby Mustang light fixtures for my aviation lights and commandeered the hood ornament of a ’56 Bel Air. I made wide rear tires out of a full set of Firebird tires, and I sourced the Moon disc wheels from a ’39 Wix Ford Coupe that I purchased specifically for that reason. The seats—“bomber style” with handmade rails added—came from Acme. 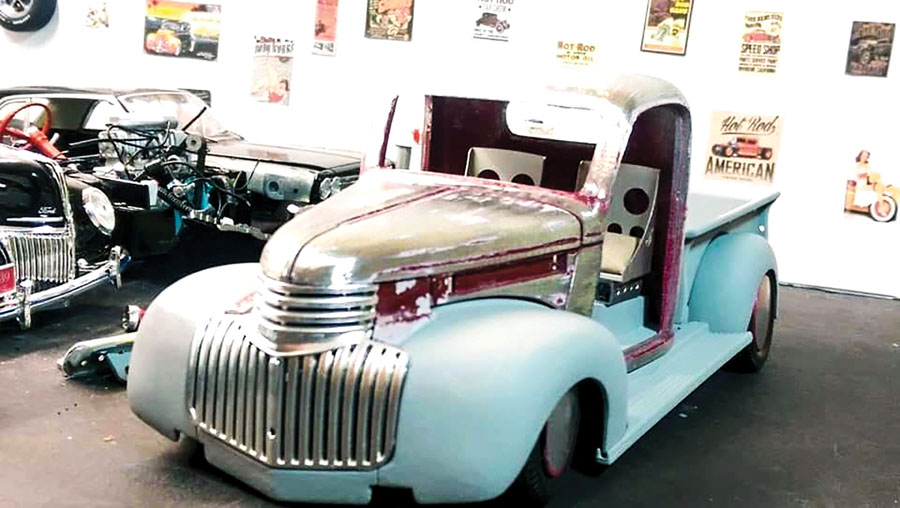 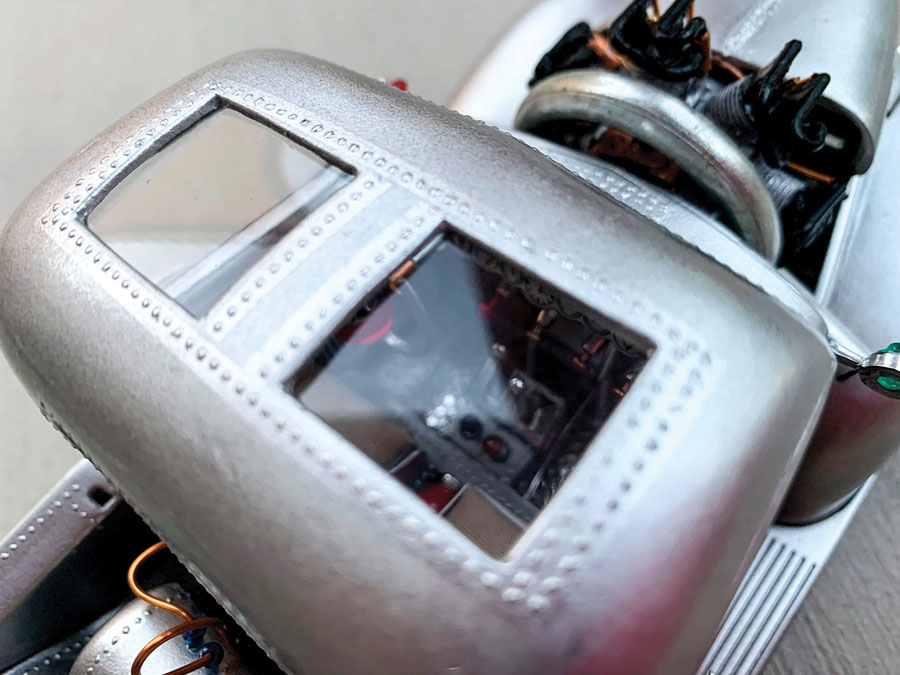 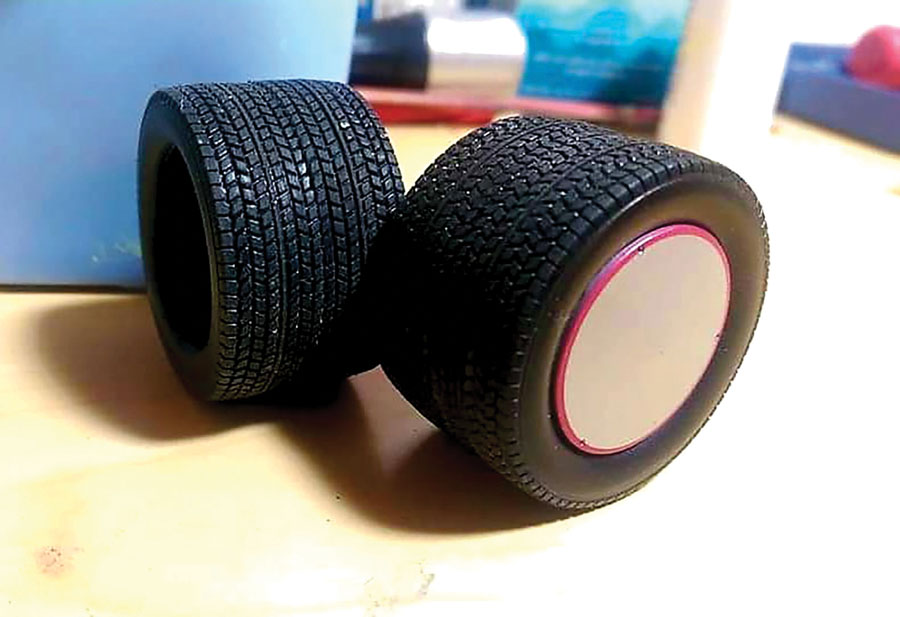 The Engine Comes Around

The time had come to focus on the most important piece of the puzzle: the radial engine. I spent some sleepless nights searching for one on the Internet and in forums, but Shapeways 3D printing services ended up offering the solution. There, I finally found a 7-cylinder radial engine that could be made in the scale to fit perfectly. Now, I had to find a way to mount it and fabricate the proper drivetrain. The real PART uses a V-drive out of a boat, so I did something similar: fabricating a boat transfer case with the proper shafts and inputs to connect the engine.
I ran copper fuel lines, and detailed and painted the rest of the engine. The exhaust is a steel ring, and many of the other details were fabricated from scratch after I had done plenty of photo research on 1:1-scale airplanes. 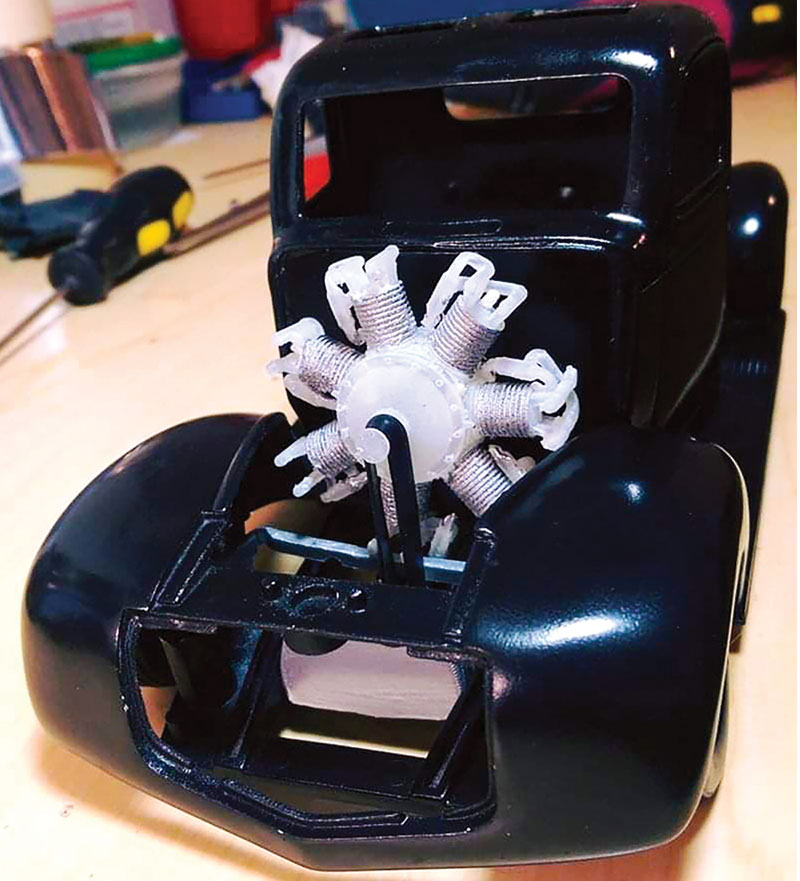 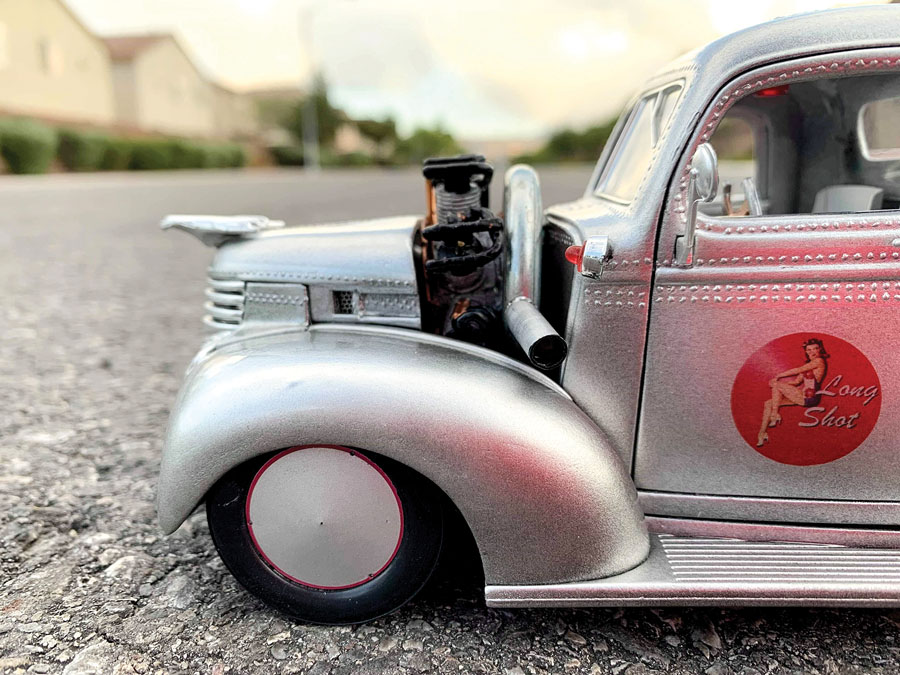 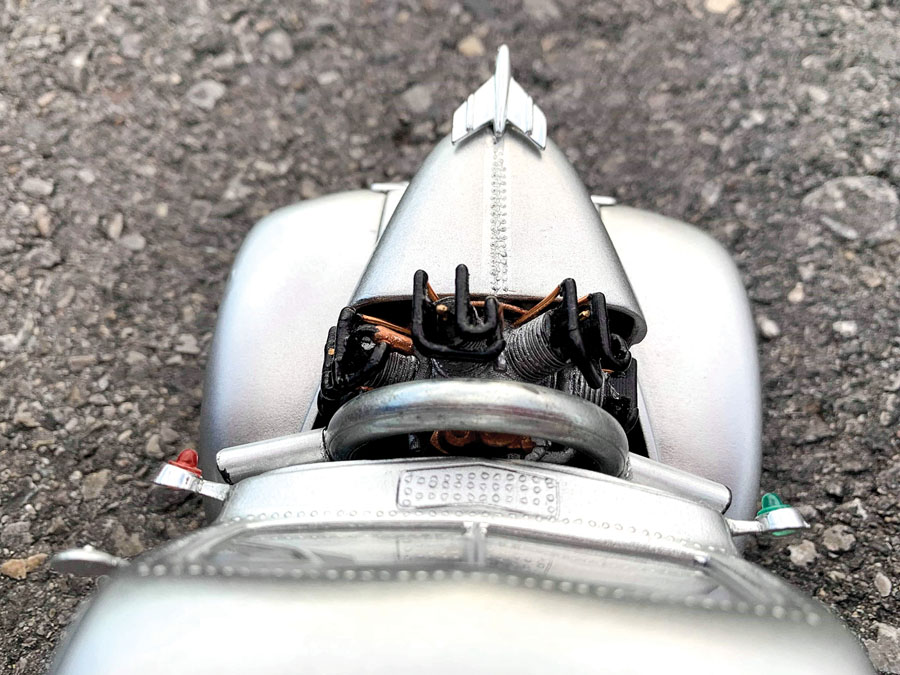 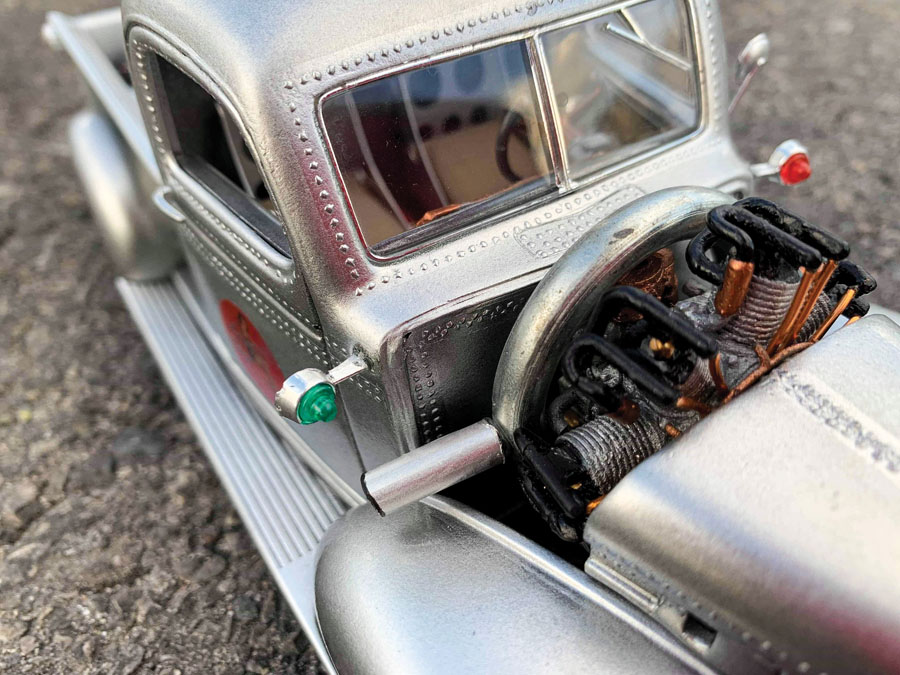 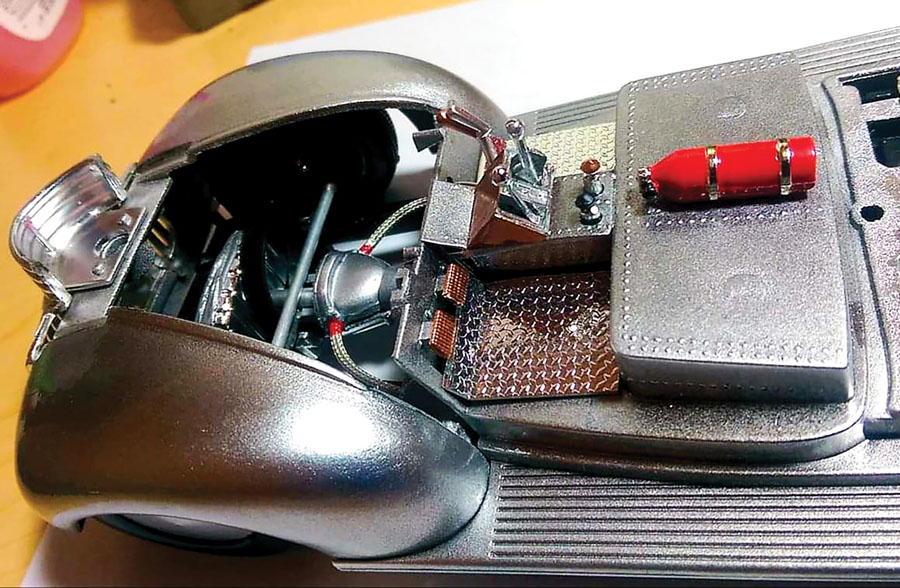 The next big issue was how in the world was I going to replicate rivets? I experienced another round of sleepless nights searching the Internet before I finally found something that could work: 3D-waterslide decals from Micro-Mark, which are made mainly for model trains and dioramas. I ordered a decal set closest to scale for my application, along with the setting solution for them. After a few tests, I knew I had one less thing to worry about because they looked exactly like rivet heads after paint. 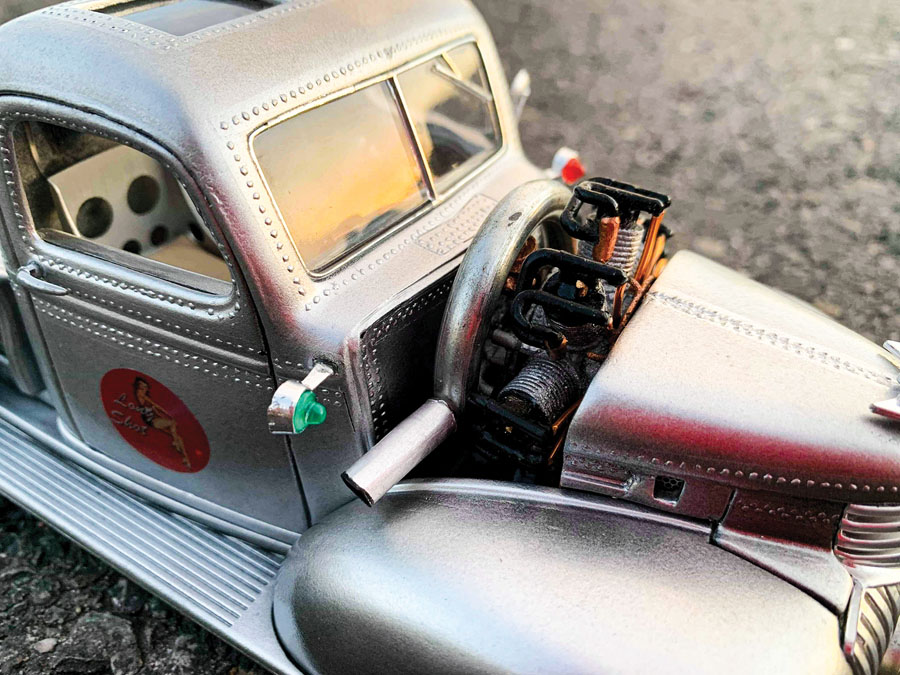 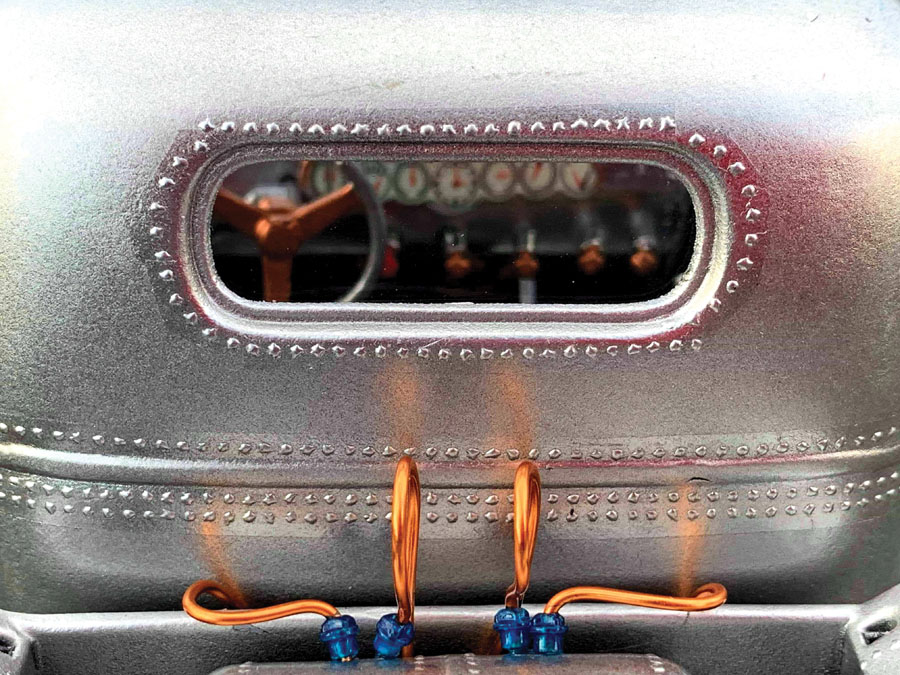 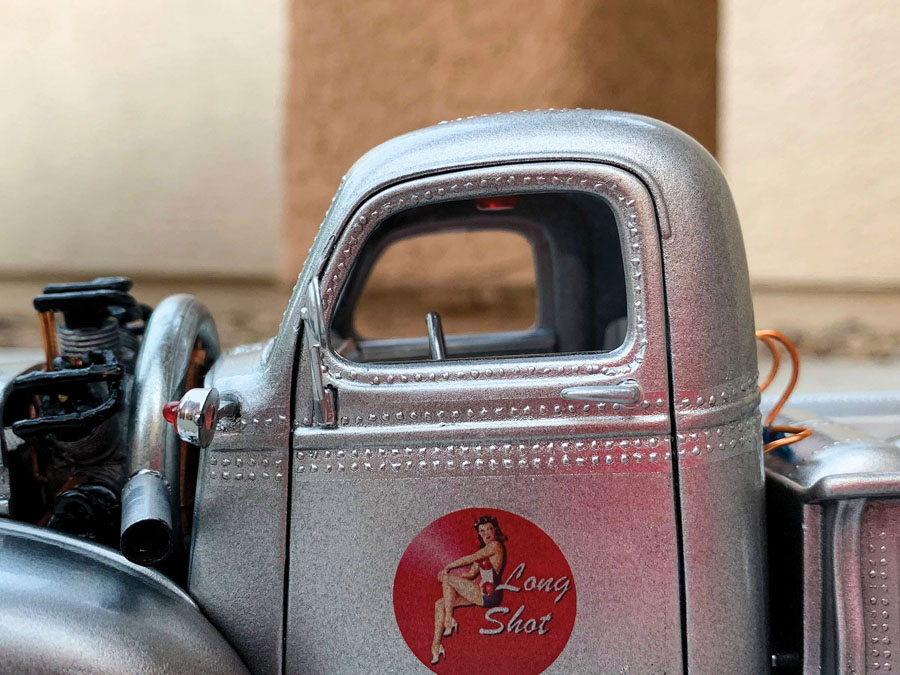 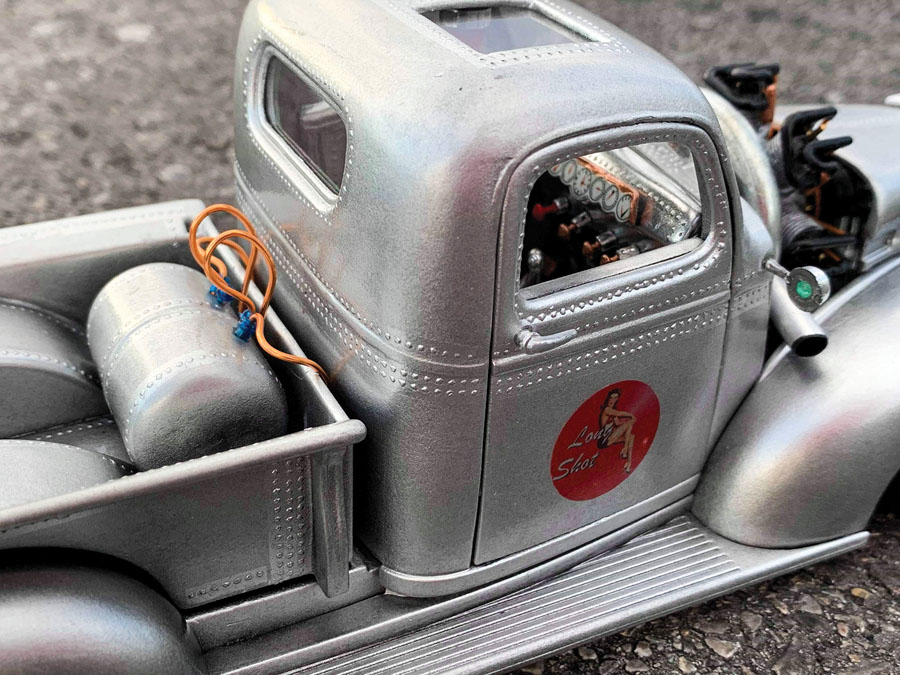 I had to find a way to replicate the brushed-metal finish on the body. Because of all the welded spots and putty, I knew I couldn’t just polish the bare-metal body—not to mention, I had those rivets and some other decals to contend with. So it had to be paint. No regular spray would deliver the chrome shine I was looking for. After yet more searching, I discovered Spaz Stix chrome spray (it is similar to Alclad), and after I watched a few videos on YouTube, I decided to give it a try. I knew this spray was meant for other uses, but if there was a chance it might work on diecast, I had to go for it. I ordered the whole kit with base, chrome, and clearcoat. Sure enough, it gave the build the looks and finish I was aiming for, plus all the decals were buried underneath the finish, making them look realistic without a lot of extra work. 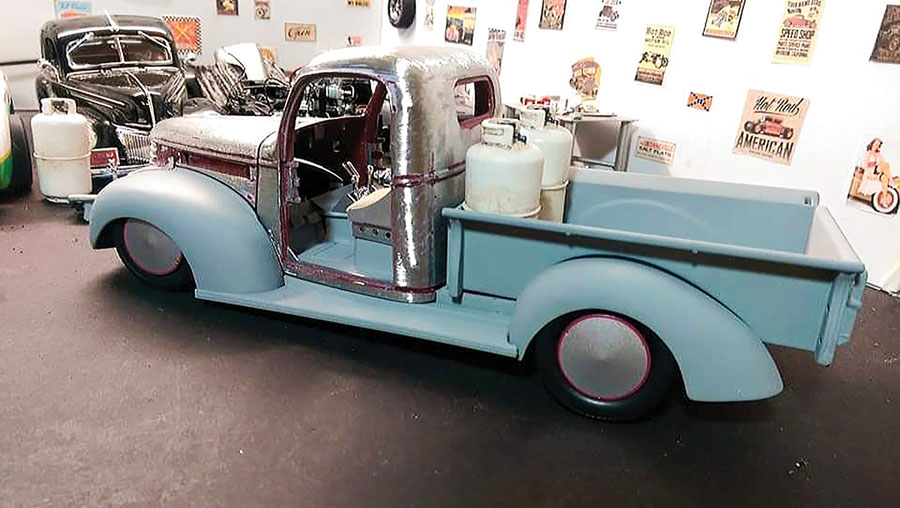 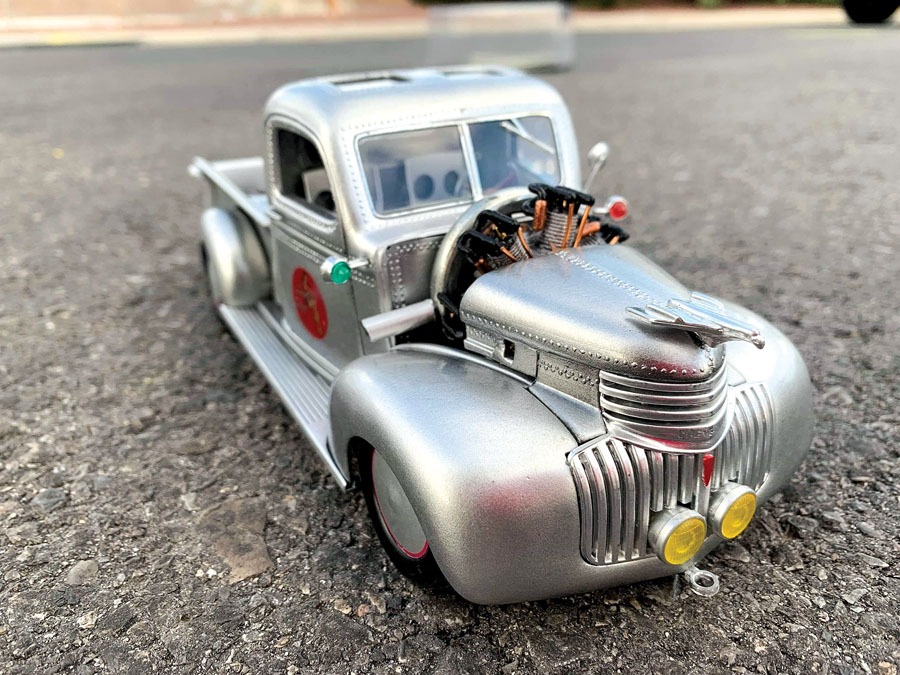 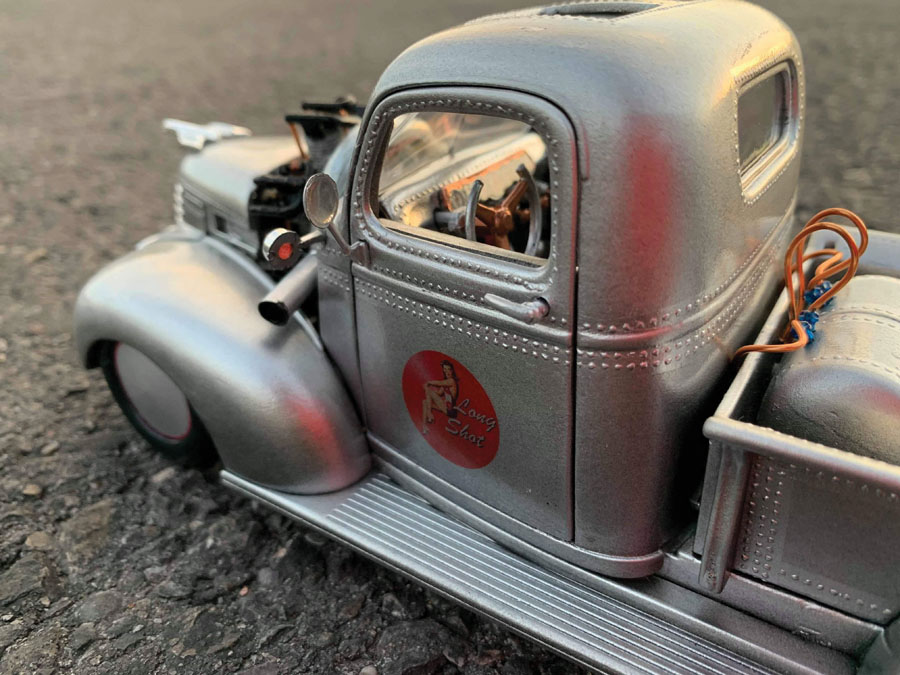 Devil in the Details

Undertaking such a build, I knew I had to devote time to fabricating most of the interior, chassis, and drivetrain. Inside the custom-built cockpit, there is a mix of brushed steel, rivets, copper, fuel lines, fire extinguishers, steel plates, aviation gauges, an airplane steering wheel, thrust levers, and lots of push/pull
switches and buttons with weird functions. The bomber seats look right at home. There’s even some WW II airplane nose art decorating the rear glass.

The chassis was based on the original truck’s but has been widened and elongated with styrene beams. In front, the rack and pinion and the suspension are custom-made, as is the rear end and all the spindles. The two belts for the V-drive came from a supercharged engine set by GMP, and are hooked to a custom-made boat transfer case I built out of styrene. The bed was a separate build all by itself. I wanted to replicate riveted steel plates and metalwork, so it had to look like steel. I tubbed the bed using styrene and ran rivets everywhere. I then added the extras: oil and air tanks with dual batteries, an aviation-style refuel system, and copper-colored lines. 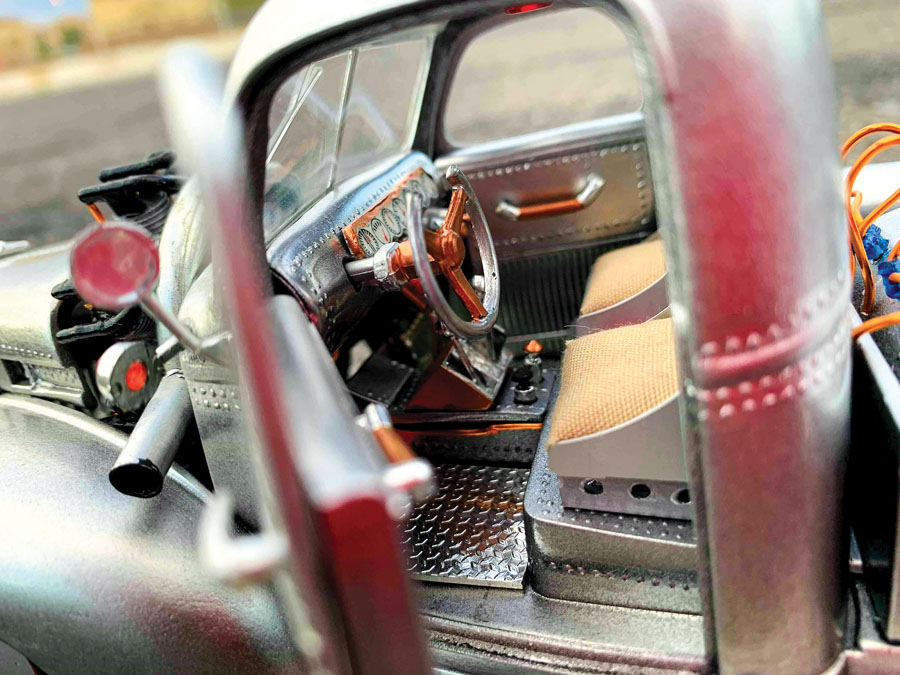 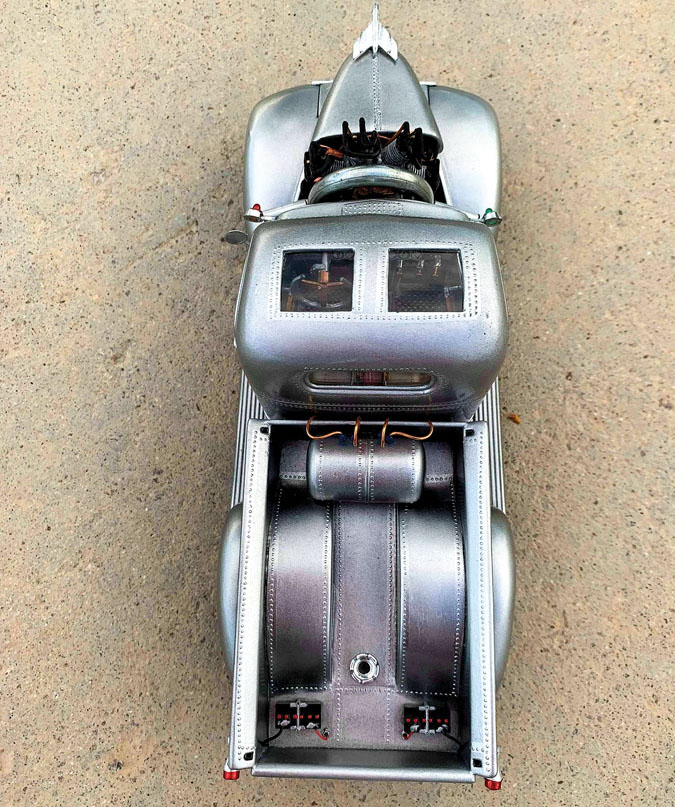 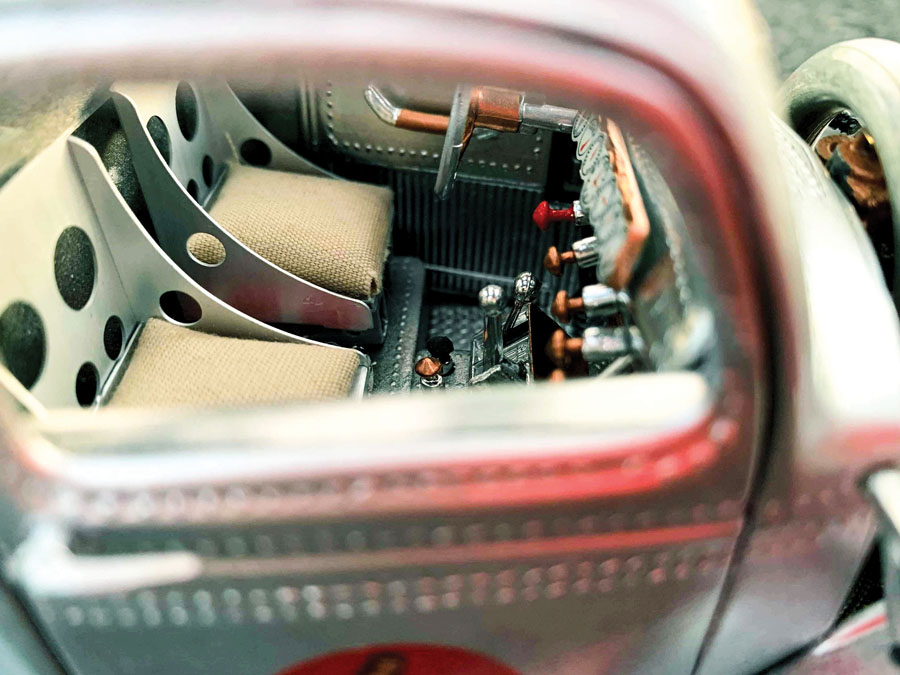 That was quite the task to accomplish in just three months! So many things had to line up perfectly—and miraculously, they did. Since getting it done was a long shot from the start, I realized that my truck had its name. I managed to reveal Long Shot a few hours before the deadline; it was a big relief, and gratifying to see it on the screen, entered successfully into the contest. The crazy amount of work, money, sleepless nights, and time spent on the truck was worth it—even more so when I learned that it had been voted the winner of the 1/18 Diecast Junkies Build Off competition among so many fantastic entries from around the world. To this day, I am grateful for all the support and love this build received from the diecast community…and beyond. 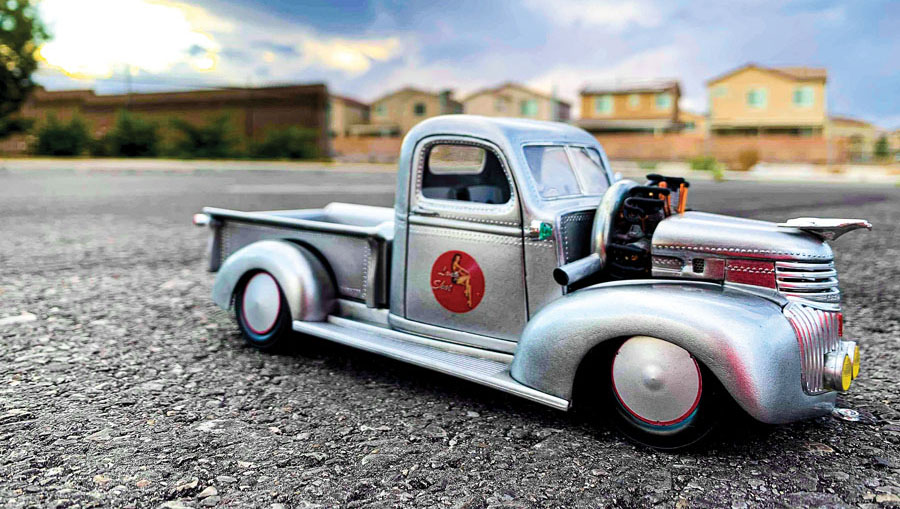 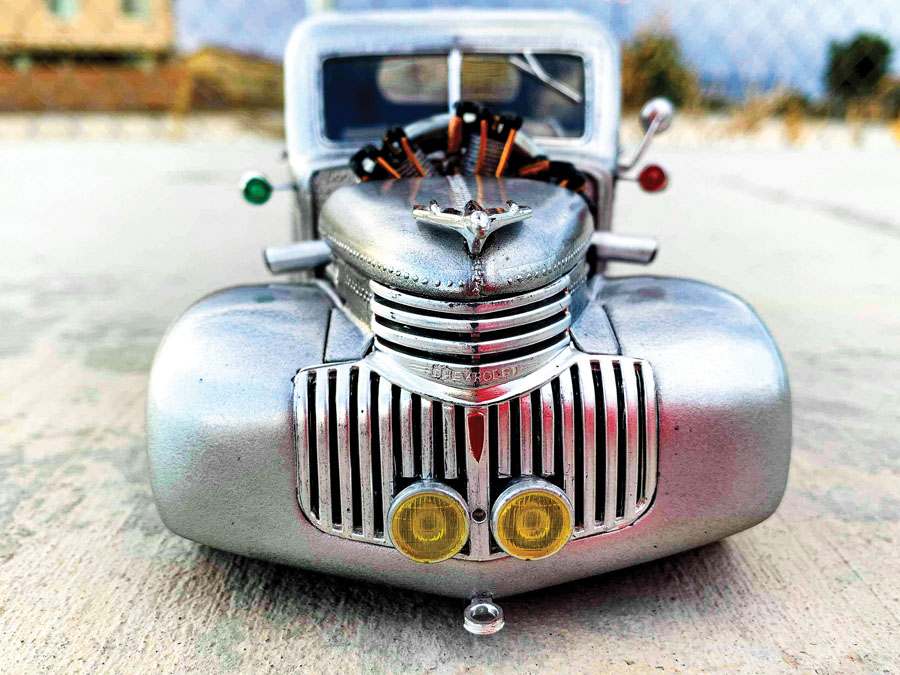 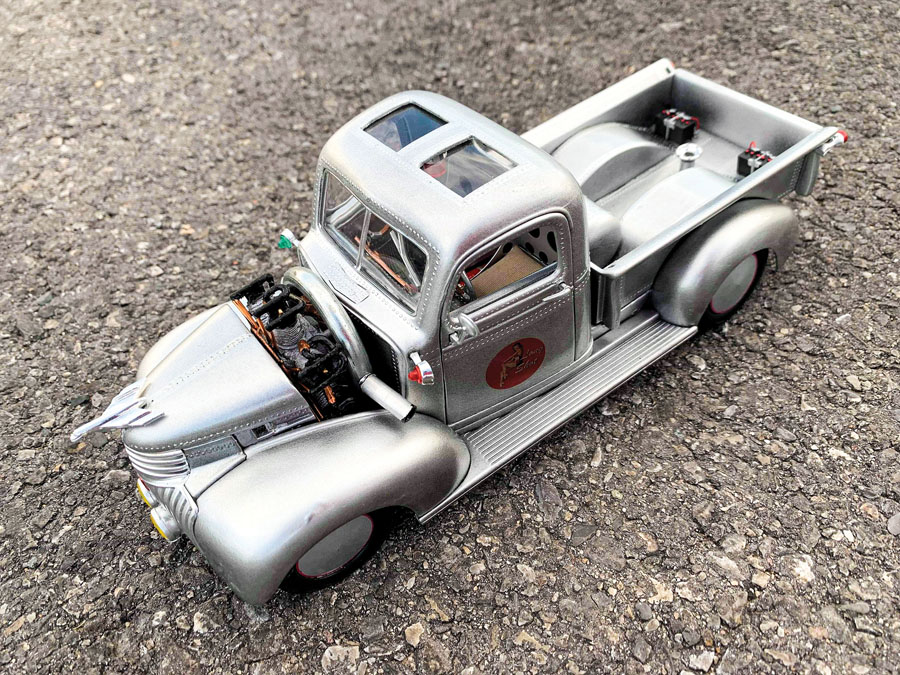 After Long Shot was built, I decided to try another long shot and contact Gary Corns and his family to thank them for all the inspiration I got from the amazing hot rod they built. To my eyes, this is one of the most iconic builds of all time. I expressed my admiration for their outstanding work and sent them pictures of my version. Their response was simply amazing! We talked back and forth, comparing notes about our builds. The next thing I knew, pictures of my Long Shot showed up on the official Instagram account of PART. Such a thrill! And a few days later, I received a phone call from Gary Corns himself and we chatted about his amazing build and my 1:18 version. We made plans for a future meetup, and he sent me a signed copy of the issue of Hot Rod that featured his truck. Now I have even more reason to make a pilgrimage to visit his shop to see PART in action and meet the Corns in person. 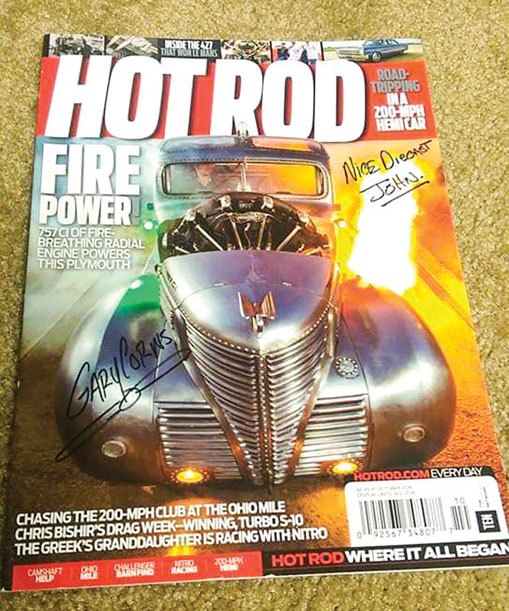