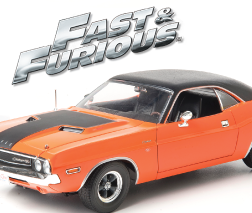 One of the American muscle era’s greatest accomplishments was the 1970 Dodge Challenger.  Using the Chrysler “E” platform, and sharing major components with the Plymouth Barracuda, the Dodge Challenger was Mopar’s answer to Ford’s Mustang and Chevy’s Camaro.  The performance model was the R/T (Road/Track), with a 383 CID Magnum V8, rated at 335 bhp. With a slew of optional engines also being offered, including the 375 bhp 440 cu in (7.2 L) Magnum, the 390 bhp 440 CID Six-Pack and the 425 bhp 426 cu in (7.0 L) “Hemi”,  one could custom tailor their Challenger any way desired.

The iconic American muscle car left a footprint that could never be filled, only honored.  Today, the car lives on in some of the most watched television series and movies – and, thanks to GreenLight Collectibles, in scale.

If you’re a fan of NCIS, you may remember seeing this beauty in season 6, episode 4. Titled “Heartland”, it was first shown in November 2008. “Gibbs” (Mark Harmon) got the honor of driving the car, and GreenLight’s model is a well replicated 1:18 diecast of this beauty.

If one isn’t enough, a second 1970 Dodge Challenger also got to live in the Hollywood spotlight, having been featured in Universal Studio’s blockbuster hit 2 Fast 2 Furious.  Though we all know that race was dramatized for the movie (and that most of us would have done without the ejector seat), any way you look at it, this is one bad ride – and looks great in 1:18,  again thanks to GreenLight.