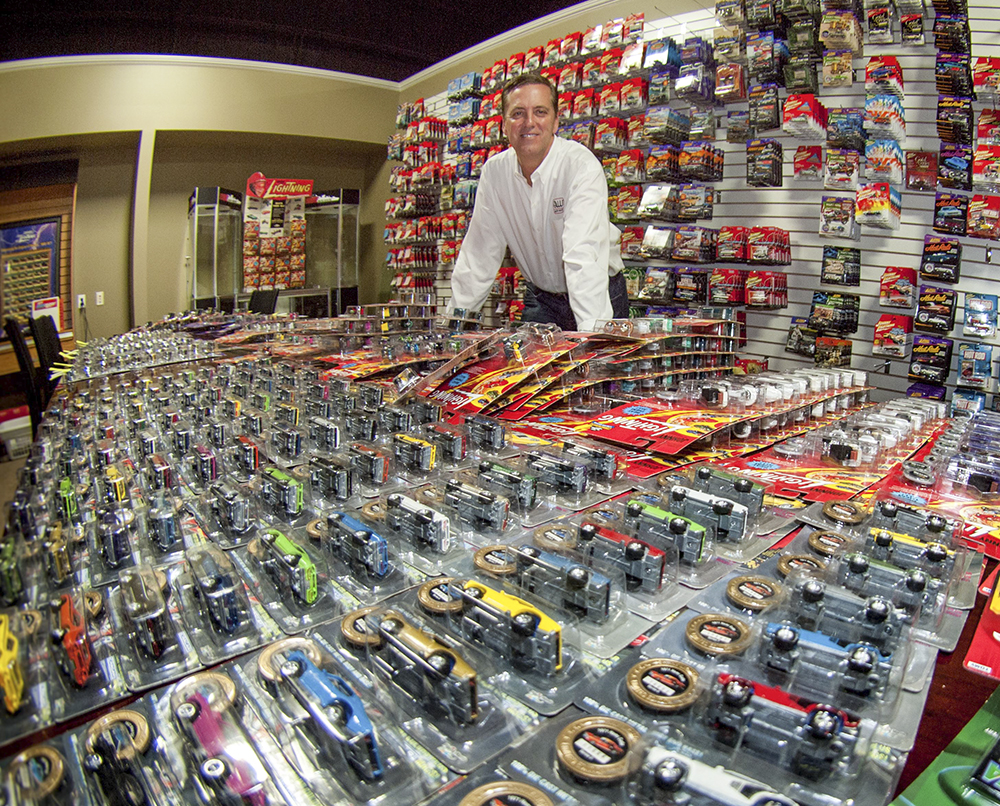 The Johnny Lightning brand is near and dear to Tom Lowe. Having resurrected the brand once back in 1994 with Playing Mantis, he is doing it again with his current company, Round 2.

Johnny Lightning (JL) is a brand name with which all fans of 1:64 diecast will be instantly familiar. Introduced originally by Topper Toys in 1969, quick on the heels of Hot Wheels’ launch, JL focused from the outset on speed above all. To raise brand awareness and further emphasize its association with speed, JL sponsored Al Unser’s race car in the 1970 and ’71 Indy 500s, capturing victory both years. The victories raised the brand’s profile and greatly boosted sales, but even that was not enough to weather the financial difficulties of its parent company, which went under in 1971.

Fast-forward 22 years, when Tom Lowe, CEO of Playing Mantis, acquired the rights to the brand name and revived production of many of the original castings, soon to be joined by a host of all-new vehicles. Fans of the original Topper JLs were drawn in by the nostalgia, while a new generation of fans was attracted by JL’s commitment to the accurate portrayal of real vehicles. The brand thrived and eventually caught the eye of RC2, who purchased Playing Mantis from Tom in 2004. The JL brand soldiered on under RC2’s stewardship, but the company gradually shifted its focus toward its more lucrative preschool markets and JL, while still rolling, got less attention. RC2 itself was bought by Japanese toy manufacturer TOMY in 2011. It initially continued to rerelease versions of RC2’s JL castings, but in 2013, it suspended JL production.

Enter, once again, Tom Lowe and his current venture: Round 2. The producer of the Auto World brand of 1:18 and 1:64 diecast, Round 2 was uniquely positioned to understand the current market conditions and also the value of the JL brand. This past September, Round 2 made the big announcement that it had acquired the rights to JL and would be resuming production of the beloved brand. So we went straight to the source and asked Tom how it all came about and what collectors can expect from the new generation of Johnny Lightning.

By the time RC2 bought Playing Mantis, JL had amassed quite a tool library. The challenge for Tom and the Round 2 crew is deciding which ones not to rerelease!

[MB] With this announcement, you are in the unique position of having twice brought the Johnny Lightning brand back from the brink of extinction. Have you been watching JL’s fortunes over the last 12 years? At what point did you feel the calling to play that role again? Did you approach it the same way the second time?

[TL] Sure, I’ve been following Johnny Lightning since I sold the business in 2004 to RC2. I have a good relationship with a couple of executives at RC2 (now TOMY), and I have been talking to them about the possibility of me taking over JL for a few years now. The approach had to be different because it is not an abandoned brand without any tool bank, like it was in 1994.

I heard you brought back several of the core team that was with you at Playing Mantis. How did that come about? Was it difficult to “get the band back together,” so to speak?

Well, two of the team members were already working for Round 2 (Tony Karamitsos and Mike Groothuis). I reached out to Mac Ragan this past summer, and he was excited to join the team, so I hired him. He started in November 2015. So yeah, it’s pretty amazing I have the same core team in place to bring the brand back. 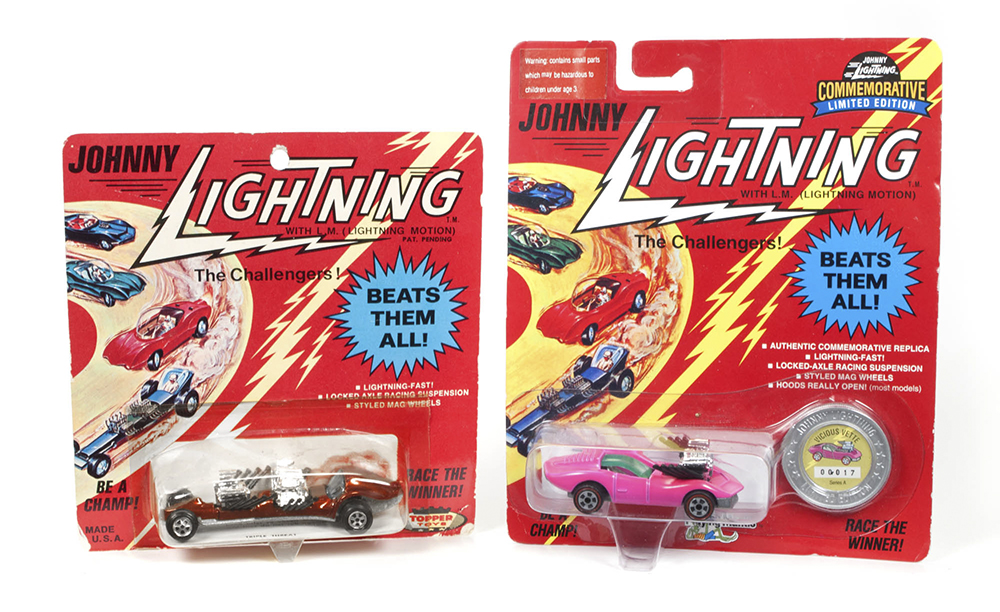 Playing Mantis-era JL always had a keen sense of the brand’s history, even going so far as to produce new editions of the original Topper castings with commemorative packaging (right).

It appears that there is a deliberate effort to recapture the Playing Mantis era—down to the logo and the initial product lines you’ve announced. What is the thought process behind that?

We will utilize the Playing Mantis logo on the front of the package and also go back to the original sharp “edgy” JL logo. I prefer this logo and the recognition it brings to the Playing Mantis era. And it will let collectors easily know that the product was developed and produced by me and my team. 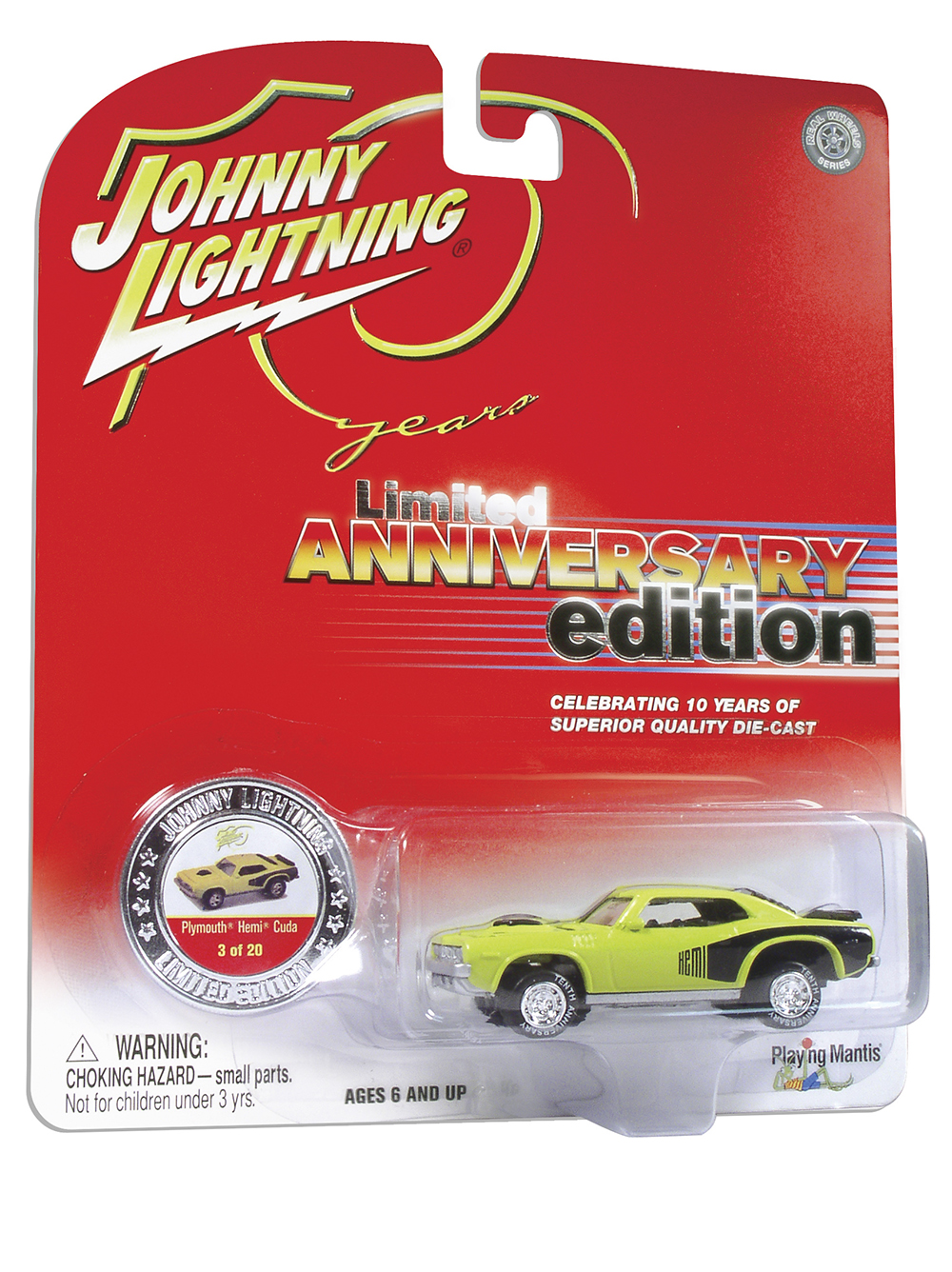 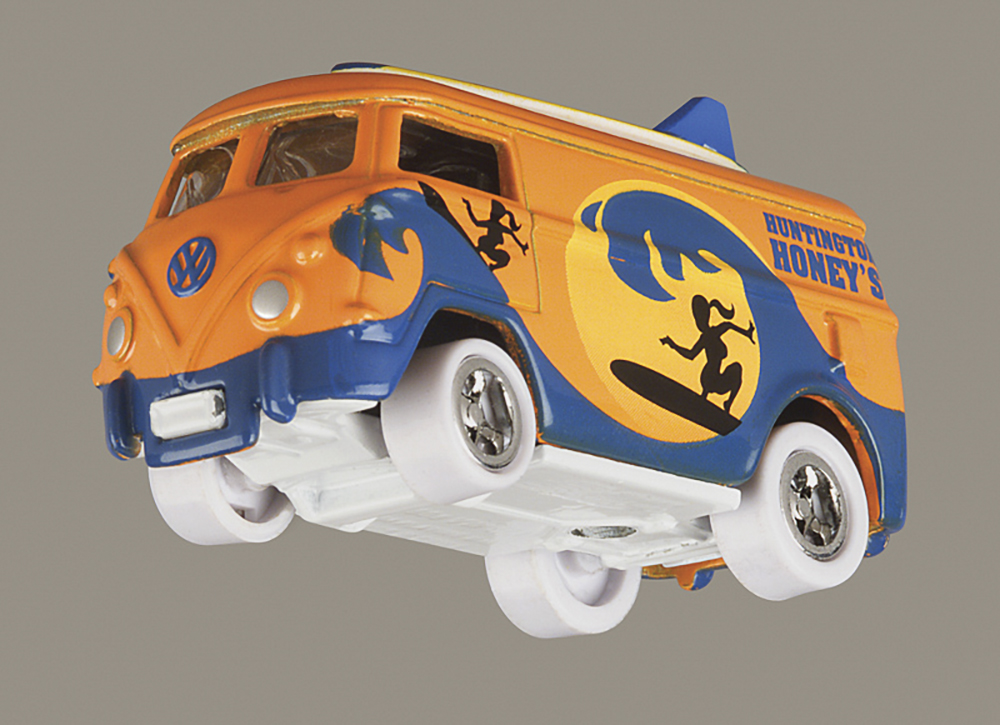 White Lightning editions were among the rarest and most collectible JLs. Look for those to return, as well.

Yes, the market has changed dramatically over the past
10 years. eBay has had a major effect on collectibility, and
the rising costs in China have affected the retail price. Basically, collector die-cast cars cost almost twice what they did 10 years ago. Tooling costs have risen, too, so you have to be very conservative when producing a new vehicle. The bottom line is the market is still there, but it’s not quite to the same level as it used to be. Many used to collect as an investment, but now collectors buy just what they like.

Tell us about your plans—starting with the first releases and then further out in terms of broader strategy for the brand. Will JL occupy the same market position (price/retail availability/product lines, etc.)?

I want collectors to connect with the JL brand the way they did in the Playing Mantis years. Round 2 is more like Playing Mantis in size, so I fully expect to create the type of bond we had with collectors in earlier years. To get that started, the first releases we’ll offer will be familiar to most JL fans: Classic Gold, Muscle Cars USA, and Street Freaks. And look for that familiar JL mix of cars—everything from a bone stock Maverick to a wild Black with Flames ’63 Galaxie. Plus, a collector’s club launches later in the year.

The first releases should all be available in stores by late January. And collectors will find them in the usual places. Walmart, Target, and Toys“R”Us are onboard. Joining the national stores is Meijer, a large regional chain. And of course, we have our loyal hobby stores and online retailers.

The johnnylightning.com website will be the go-to place for the latest information on current and upcoming releases as well as feature stories and information on where to find specific cars. Plus, we’re developing an interactive garage designed to make cataloging your collection not only useful but fun. And we’ll live-feed our news to social-media outlets, like Facebook, where collectors can talk with us about the latest news, comment, repost it, and so on. 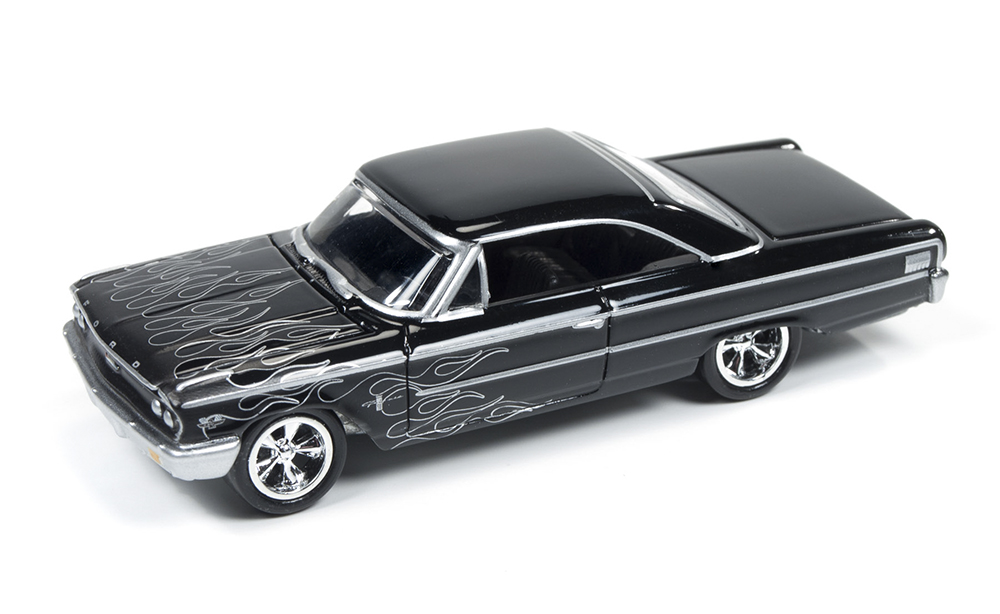 “Street Freaks” are coming back, as well. Release 1 will include this ’63 Galaxie 500 in Black with Flames. 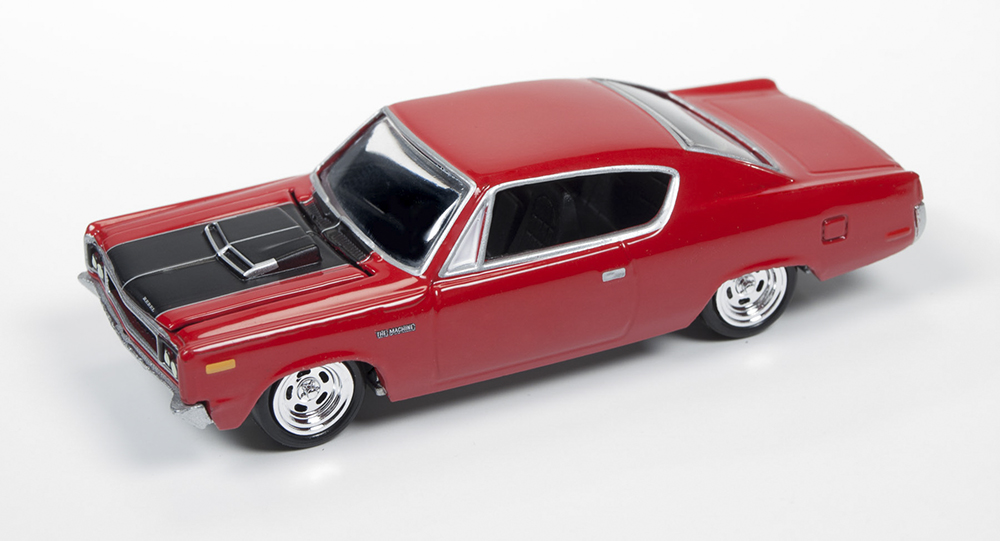 Each release will come in a B-version color, like this AMC Rebel in Euro Red.

Why did you choose the cars you did?

Well, the JL tool bank is very large. With all the variations, there are nearly a thousand different vehicles to choose from. Of course, we know that some of the earlier tools are not up to the current level of detail, especially the cars that were tooled from 1994 to 1996. Playing Mantis was just getting started and was learning how to make quality diecast from the school of hard knocks!

So what we do is get the team together (pizza and beer help!) and just start choosing castings that we think might make sense. They need to be solid castings and can’t be released more than three or four times over the past five years. Many of the cars we choose have only been produced a few times, and I think you will be pleased with our first selections. 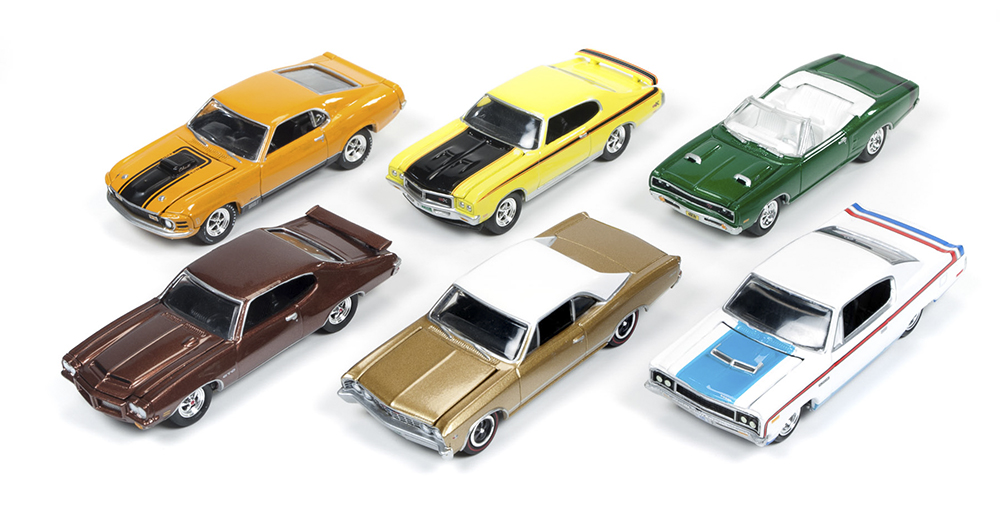 What was the most difficult part bringing the cars to market?

Actually, it was the time and effort it took to move the tools from RC2’s factory to the factory we will be using. I think we moved more than 200 tools in just 60 days. That’s a lot of steel moving around.

We hear you also acquired Racing Champions. Tell us about your plans for that brand.

Yeah, we did! RC2/TOMY was not marketing any product under Racing Champions. It’s an incredible brand that is very well known. The tool bank is awesome, too. No Racing Champions products have been mass-produced for a number of years, which is incredible, to say the least. So our plans are to bring the brand out of extinction and start making great diecast again!

We’ll start early next year with the relaunch of the Racing Champions MINT line. These are cast from the original Racing Champions and Ertl molds. Collectors will recognize the familiar black packaging and display box for each car. If the model had a diecast chassis in the MINT line, we include that again. But this time around, we amp up the painted details to give every car a new level of authenticity.

Round 2 also produces Auto World. Now that you have JL, how will that affect Auto World?

We continue to support and produce Auto World True 1:64-scale diecast. Round 2 now has three brands: JL, Auto World, and Racing Champions. Three great brands with one of the largest tool banks in the world. We plan on doing everything possible to create a large variety of exceptional products and bring the passion back to our hobby.

If you were speaking directly to JL fans, what is the one thing you most want them to know about the return of their beloved nameplate?

That we are very passionate about the brand and will do our best to make the product that collectors will love and put smiles on their face. If I or the guys on the team would not personally buy the product, then we won’t make it! 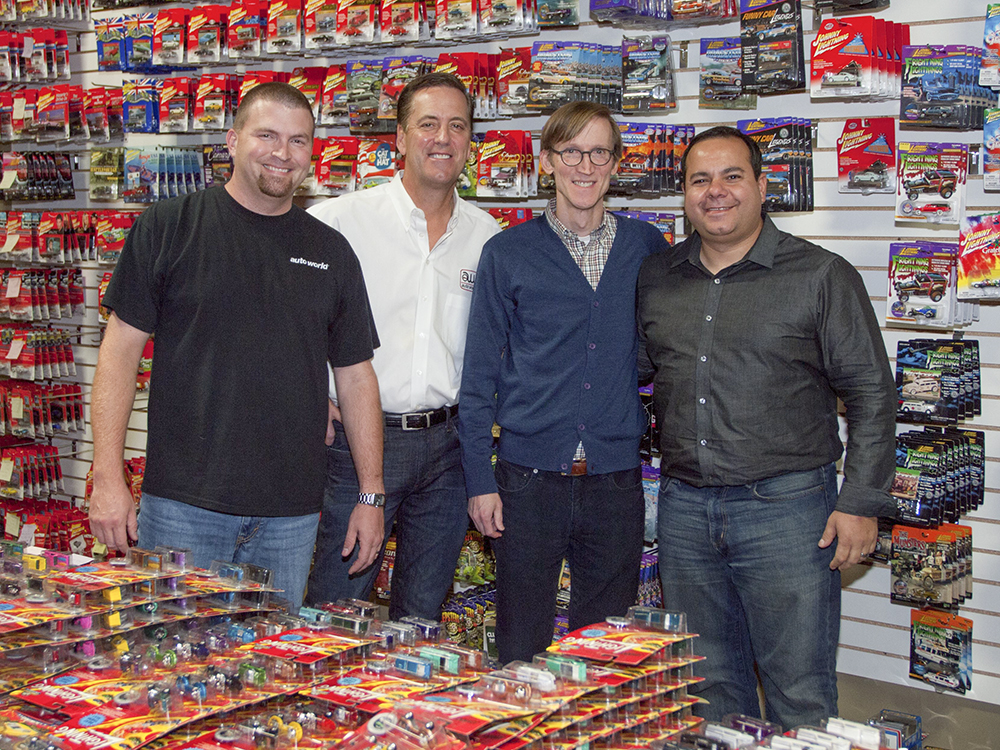 Key to recapturing the magic of the Playing Mantis/JL days was getting the band back together. Mike Groothuis (far left) and Tony Karamitsos (far right) were already at Round 2. Tom approached Mac Ragan (center right) this past summer, and he signed on, too.