Fans and collectors of 1:64 will be very familiar with Johnny Lightning. The classic brand has ridden a rollercoaster of fortunes, having disappeared from the market in the early ‘70s only to be resurrected by Tom Lowe’s Playing Mantis Group in the 1990s, during which time it established itself as a source for scale accuracy in 1:64 while remaining affordable and accessible in the retail space. RC2 bought up Playing Mantis in 2005 and Johnny Lightning underwent a series of changes as it sought to redefine the brand and find a new market niche. The parent company’s struggles eventually resulted in RC2 being sold to TOMY, and the Johnny Lightning brand was discontinued for a second time in 2013. Enter Tom Lowe once again, who has just announced that his current venture—Round 2—will be riding in on its white (lightning) horse to save the Johnny Lightning brand once again—collectors rejoice! Round 2’s press release announcing the move appears below, and be sure to check out our next issue (out in December) for the full story! 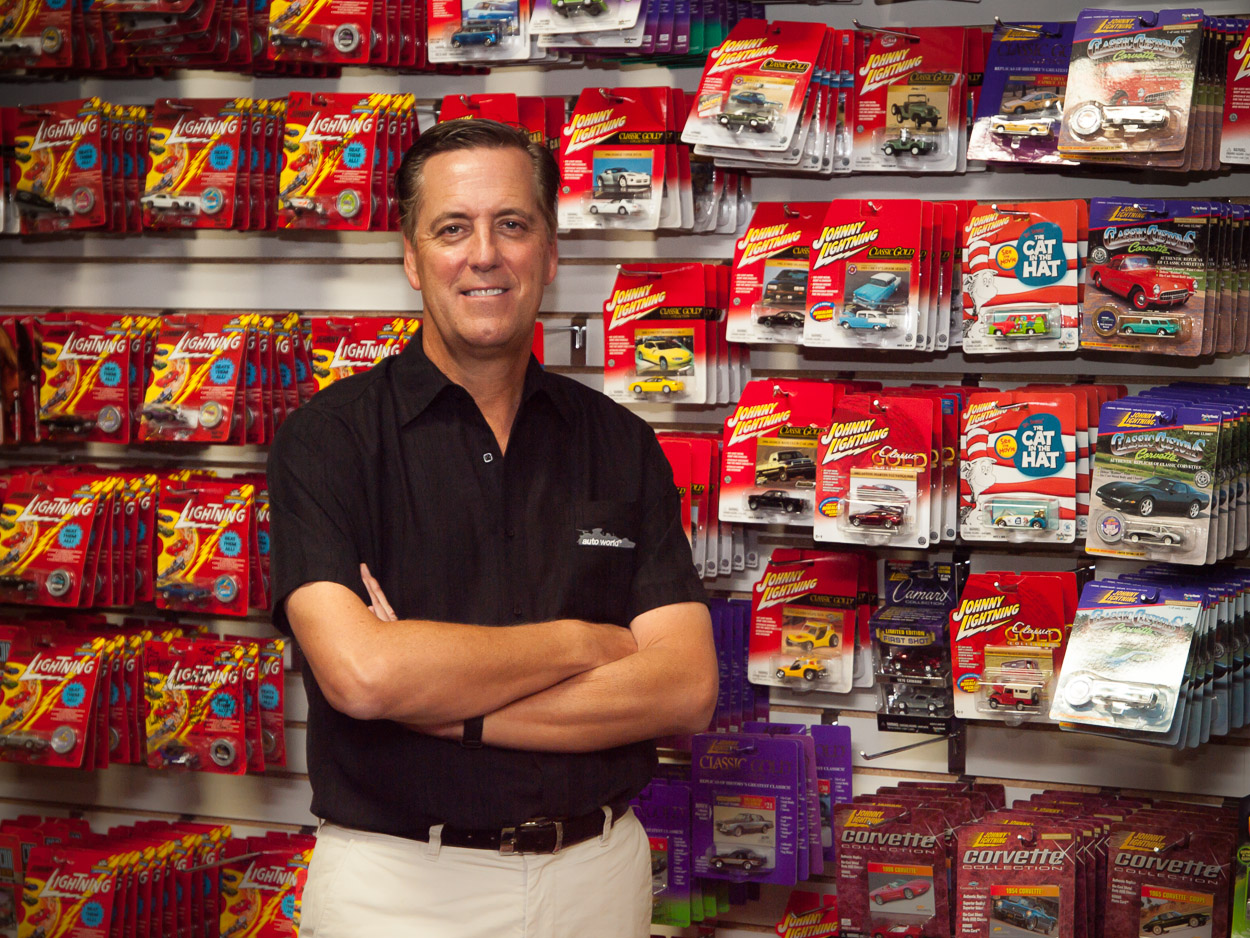 SOUTH BEND, Indiana – Round 2 proudly announces that they have licensed the rights from TOMY International, Inc. to produce the iconic Johnny Lightning® brand of die-cast collectible vehicles.

Thomas Lowe [pictured], President and Founder of Round 2 LLC, “Electricity is in the air, and I feel extremely fortunate to partner with TOMY International, Inc. to reintroduce the Johnny Lightning® brand back into the realm of the collector”.

1969, Topper Toys launched Johnny Lightning “high speed” toy cars. In 1970 and 1971 Topper Toys sponsored Al Unser Sr. in his Johnny Lightning Special race car. Unser went on to win the Indianapolis 500 back-to-back helping to further cement the Johnny Lightning name as a “winner” in the publics mind. As a reference to the Indy cars’ performance, Topper printed the slogan “Beats Them All!” on every package. Topper produced 47 di­erent castings before closing in 1971.

1994, Thomas Lowe established a new kind of collectible toy company… Playing Mantis. Tom premised his new venture on the idea that the collector was king. “Keeping a close and on going relationship with the collector/consumer not only made good business sense, but also made all of the hard work involved with designing and producing die-cast cars a whole lot of fun.” Playing Mantis also pioneered the White Lightning® chase cars. White Lightning® vehicles were randomly inserted into sealed cases at the factory and made up 1-3% of the production run, making them not only extremely rare, but extremely desirable to the collectors. The Johnny Lightning® name was once again “Beating Them All” with the introduction of numerous new high quality muscle car replicas. Johnny Lightning® brand continued as a cornerstone in the collectible die-cast automotive world. In 2004, RC2 (now TOMY International, Inc.) purchased Playing Mantis.

Tom’s love of toys in general and automobiles in particular drove him to acquire the Auto World brand in 2005, and establish Round 2 LLC. Round 2 markets and sells licensed toys and collectibles including: Die-Cast Vehicles, Slot Cars, Race Sets, Plastic Model Kits and Collectible toys.

2015, Round 2 is taking the die-cast automotive world by storm with the relaunch of Johnny Lightning® collector die-cast vehicles! Said Kerry Cunnion, Senior Vice President of Marketing and Sales at TOMY International, Inc.- “It’s great to partner with Tom and his Round 2 team by licensing them the rights to market Johnny Lightning® die-cast collectibles. Tom and his team are very impassioned about the die-cast collector market… I know that Round 2 will do an excellent job relaunching the collector brand.” Thomas Lowe responded, “I grew up playing with and collecting Johnny Lightning® vehicles and having the opportunity to reintroduce this classic brand not just once, but twice is simply amazing. I feel extremely passionate and con‑dent that by both bringing back classic Johnny Lightning® programs, in their original-styled packaging and introducing newly tooled vehicles… Die-cast collectors young and old will once again join with me in “Beating Them All”.

The new product will hit store shelves in January of 2016! “The Johnny Lightning tool bank is absolutely incredible, with over 900 di­erent tools to choose from! Our ‑rst 4 releases, consisting of 6 cars each, will be the following themes: Muscle Cars U.S.A., Classic Gold, Street Freaks and Monster Trucks. You’ll ‑nd everything the die-cast collector craves from American iron, classic imports and car culture customs. Some of these cars were produced only once and most have not been seen on store shelves in over 10 years. The Johnny Lightning design team and myself have done our research and picked the best of the best to o­er to our fellow enthusiasts.” says Lowe. Coming soon, Round 2 also plans all-new tooling with the Dodge Challenger and Charger, Hellcat versions. So, strap-in and hold on tight as we stomp on the gas with the new Johnny Lightning… Your Collection. Our Passion.™

Round 2, LLC is an innovative collectibles and toy company located in South Bend, IN. The creative team at Round 2 is dedicated to producing detailed, high quality collectible and playable items appealing to the young and young at heart. Round 2 brands include Polar Lights®, AMT® and MPC® model kits. Auto World® slot cars, Forever Fun™ seasonal products and the licensed brands Johnny Lightning, Racing Champions, Legends of the Quarter Mile, American Muscle®, Ertl Collectibles® and Vintage Fuel™ die cast.

TOMY International (www.tomy.com) is a leading global designer, producer and marketer of innovative, high-quality toys sold to children and adults under the TOMY®, Ertl®, and Battroborg™ brands as well as products for parents, infants and toddlers under The First Years®, Lamaze, JJ Cole® Collections and Boon® brands. TOMY International also markets its products under popular and classic licensed properties such as John Deere, Pokémon, Chuggington, Sonic the Hedgehog, Inside Out, The Good Dinosaur, Miles from Tomorrowland, Winnie the Pooh, Princesses, Cars, Fairies and Toy Story, and other well-known properties. TOMY International’s mission is to make the world smile. TOMY International reaches its target consumers through multiple channels of distribution supporting more than 25,000 retail outlets throughout North and South America, Europe and Australia. TOMY International is a wholly owned subsidiary of Japan-based TOMY Company, Ltd. (Tokyo Stock Exchange Code No. 7867). © TOMY

For more details on all the product lines produced by Round 2, visit www.round2corp.com