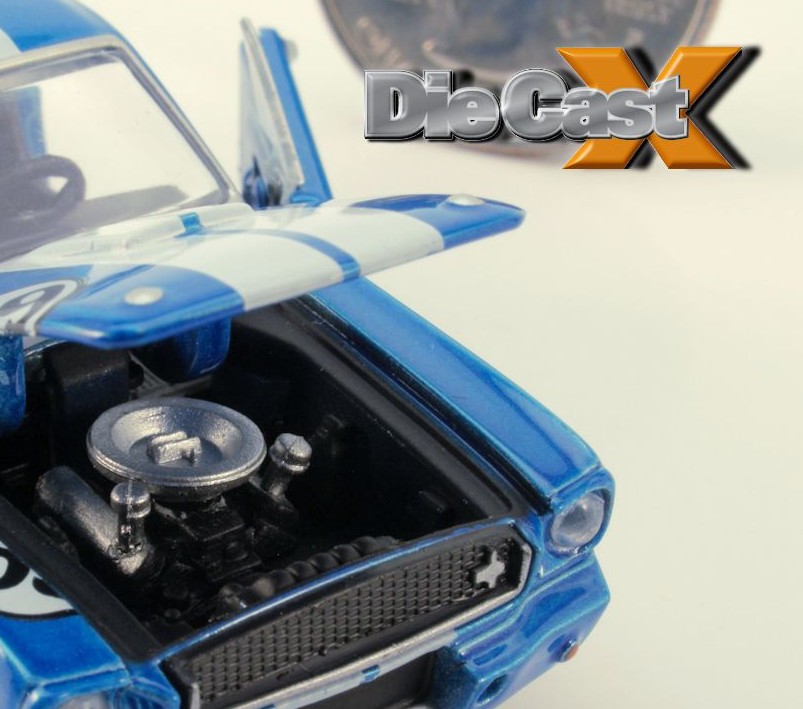 Carroll Shelby’s legacy remains one of the strongest in automotive history. M2 Machines’ “Shelby Tribute” 1:24 and 1:64 first-gen Shelby 1965 Mustang GT350s celebrate the life of the legend, and each car wears the number “89” (Mr. Shelby’s age at passing), a brace of reproduced Shelby signatures on its roof, and the stylized “CS” logo on its haunches above the numbers “1923-2012”.

The 1:24 ‘Stang has opening doors, hood, and trunk, and steerable wheels; under its hood there’s a Paxton-fed Cobra 289 that’s been moderately wired and plumbed. The caged interior has the correct Shelby-specific instrument pod at the center dash, and a spare mounted under its rear window. The cars all roll out in combinations of Guardsman Blue and Wimbledon White, with opening doors and hoods, sharp tampo markings, and very well done mag wheels with Good Year Polyglas tires. Each comes mounted to a display base, and offers a lot of bang for the buck – something Shelby certainly understood. Look out for the 89 clear-coated metal “raw” cars (1:24 pictured) that have been randomly slipped into the cases as they ship from M2’s warehouse.

Want to see these cars in hand? Check out the November 20 edition of Die Cast X TV LIVE – Click HERE