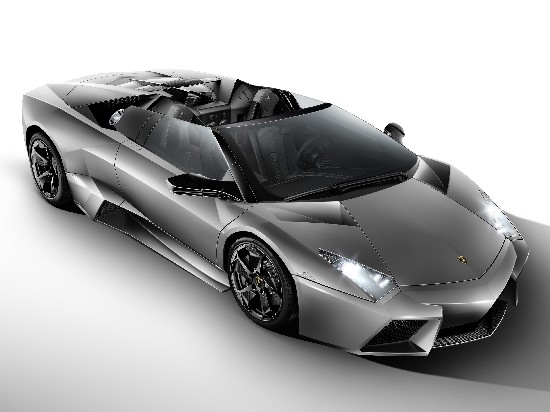 Kyosho, Maisto. AUTOart, Hot Wheels, Minichamps are just some of the diecast companies that have helped push the Lamborghini image to collectors. The Reventón, a top-line Lambo with plenty of style, was released in scale to rave reviews and rapid sales. A few weeks ago, Lamborghini debuted its latest ultimate speed machine, the Reventón Roadster, a sports car of breathtaking style, menacing power and uncompromising performance. The 6.5-liter V-12 engine generates 670 horsepower capable of moving the Roadster from 0 to 60mph in 3.1 seconds and onwards to a top speed of 205mph. The open-top Reventón is not only one of the fastest but also one of the most exclusive cars in the world, as only 20 will be made available at a cost of one $1,700,000 each.

The Reventón is the most extreme car in the history of the brand, commented Stephan Winkelmann, president and CEO of Automobili Lamborghini S.p.A. The new Roadster adds an extra emotional component to our combined technological expertise: it unites superior performance with the sensual fascination of open-top driving.  All Lamborghinis are created with an avant-garde approach to design; a fast-moving technical sculpture. The Reventón Roadster is derived from the same creative thinking as the Coupe. Its designers found their inspiration in aviation; the aggressive wedge shape evokes images of fighter jets.

Behind the two seats are two hidden pop-up bars that deploy upwards in just a few hundredths of a second in the event of an imminent rollover. A fixed, horizontal wing-shaped member behind the seats bears the third brake light. The design of the Roadsters long back is also quite distinct from that of the Coupe. The engine bonnet is virtually horizontal and a total of four windows made of glass provide a view of the mighty V-12 in all its technical elegance.

Like the Coupe, a unique paint finish completes the razor-sharp design language of the Lamborghini Reventon Roadster. For this exclusive special edition, designers have created a new shade of matte gray called Reventón Gray. As for the Reventón Coupe, which is a slightly different shade of gray, this is a matte paint finish that, in the sunlight, displays an unexpected impression of depth thanks to its special metal particles.

The V-12 engine is a masterpiece of Italian engineering. Two chains drive its four camshafts that, in turn, operate the 48 valves. Together with the three-phase adjustable intake manifold, the variable valve timing delivers a meaty torque buildup. Dry sump lubrication ensures that the high-tech power unit has a constant supply of oil, even under heavy lateral acceleration. The absence of the oil sump means a low mounting position, benefitting the cars outstanding handling characteristics. In classic Lamborghini style, the aluminum engine is mounted longitudinally in front of the rear axle, with the transmission ahead of it beneath the center tunnel. This layout results in 58 percent of the overall weight being borne by the rear wheelsideal for a powerful sports car.

This layout accommodates the Viscous Traction permanent all-wheel drive. Under normal conditions, it sends the vast majority of the driving force to the rear wheels. Should they begin to spin, the central viscous coupling sends up to 35 percent of the power via an additional shaft to the front axle. Limited-slip differentials are located there and at the rear axle, with 25 and 45 percent lock respectively.

As fast as the open two-seater may be, its road manners are reported to be impeccable. Its performance limits are extremely high, yet effortless to control. And, on exiting a bend, all four wheels stick tenaciously to the asphalt. The permanent all-wheel drive dovetails the car firmly with the road, delivering decisive benefits in traction and stability.

It will only be a matter of months before the roadster version comes to diecast. No doubt 1:18– and 1:43-scale versions will be offered prior to spring. Look for a few reviews in an upcoming issue of Die Cast X.