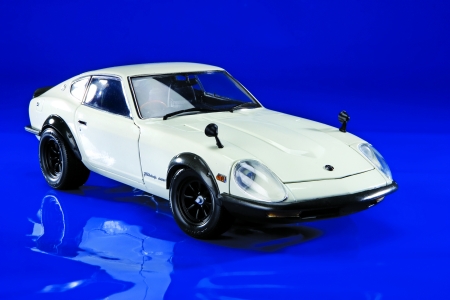 If imitation is the sincerest form of flattery, Jaguar should feel quite honored by the Nissan Fairlady Z, known to the U.S. as the Datsun 240Z. The resemblance to the E-type is striking. Throughout much of the ’60’s the E-type (or XKE) was the benchmark for the affordable sportscar. But over the years the Jag ballooned in price and weight, losing some of its original appeal. Nissan decided to borrow Jag’s formula when it introduced the original Z in 1969. The shape and proportions were pure Jag (at about 7/8ths scale) and I see a little Daytona Ferrari thrown in. Even the Z’s 2.4L inline six was modeled after the E-type’s durable and potent powerplant. For the 1972 model year Nissan built a special Z called the 240ZG for the Japanese market (right-hand drive only) to homologate it for FIA Group 4 racing. The car had a longer, more aero-friendly fiberglass nose (sometimes called the “G-nose”), riveted-on fender flares to clear wider tires, and a rear ducktail spoiler. Kyosho does this exclusive Z in 1:18 and 1:43. Both models feature exceptional engine and interior detail for their respective scales This is one of those cars that doesn’t get modeled much, but it deserves to be and Kyosho’s versions are really sharp. 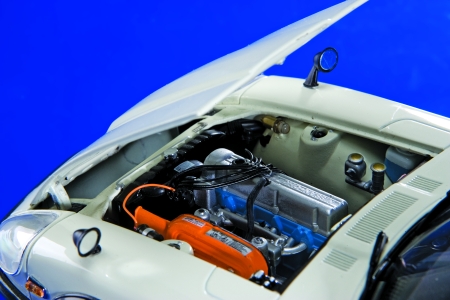