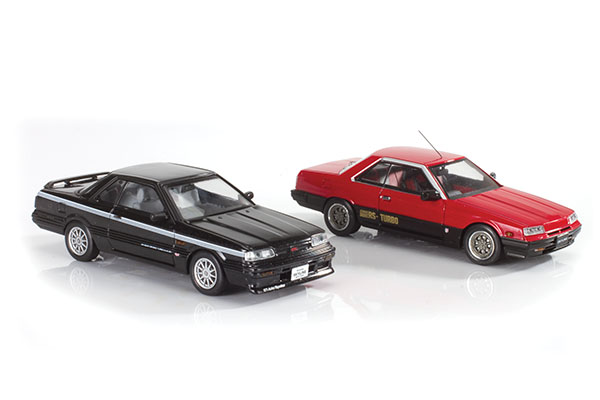 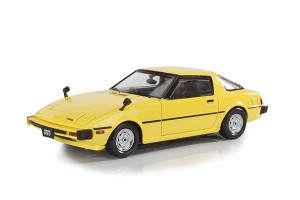 Two of the most traditionally admired names in Japanese sporty cars have been the Nissan Skyline and Mazda RX-7 (known as the Savannah in Japan.) For years, Nissan’s sporty coupe and sedan line was unavailable here, but we admired from afar their potent performance — particularly the Turbomodels. Kyosho delivers the hottest version of the DR30 (1981-85) Skyline — the 2000RS-X Turbo-C—in 1:43. Those alphanumerics are a mouthful, but all you really need to know is: 205hp. The FJ20T-powered Skyline was the most powerful Japanese car of its day! The R31 continued the tradition, upgrading to the RB20 series of inline-6 engines, the hottest of which was the 210hp Turbocharged NISMO GTS. While Nissan focused on horsepower, the Mazda RX-7 built its reputation on handling,and the first-generation SA22C (1978-80) was among the best-handling cars in the world at the time! All three have a strong cult following, making them excellent choices for Kyosho to produce in 1:43. Several colors of each are offered.