You have to squint pretty hard to see the Toyota FJ roots beneath the slick exterior of the modern-day Lexus LX series SUV. The earliest FJs were two-door utilitarian off-roaders—quite literally Japanese knock-offs of the original Jeep CJ—and by the 1960s Toyota’s signature 4×4 had developed quite a following both for its reliability and for its terrain-conquering prowess. But for all their strengths, two things those FJs were not were roomy and comfortable, so in 1963—in response to growing demand in the USA and elsewhere—Toyota added a long-wheelbase 4-door version of the iconic FJ40 Land Cruiser dubbed the FJ45. In 1967 that evolved into its own distinct model, the FJ55—a homely but nigh indestructible wagon that came to be nicknamed the “Iron Pig.” 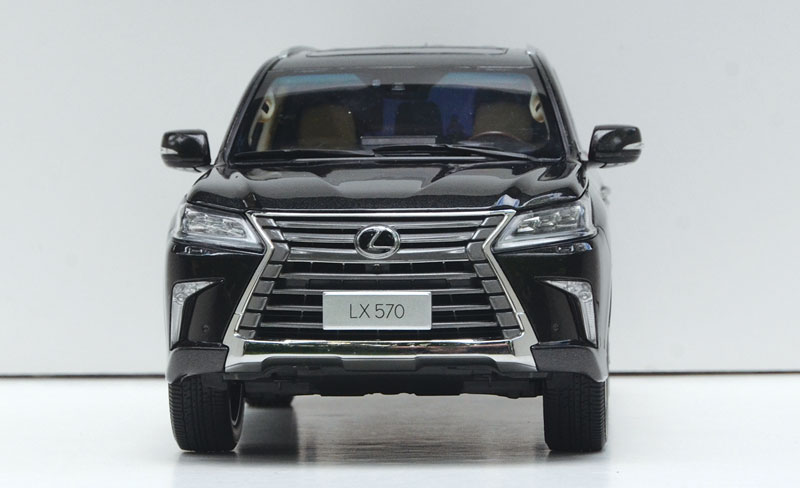 Offering seating for up to seven and in more comfort than preceding models, the FJ55 can be described as Toyota’s first “luxury” SUV, although its interiors were pretty spartan by today’s standards and it retained superior all-terrain capability. The FJ55 evolved into the FJ60 series in 1980 and then into the FJ80 in 1990, each adding successively more creature comforts. A huge bump in power arrived in 1992 when the aging F-series OHV Inline-6 was replaced by the new DOHC FZ (thereby dropping the “F” from the J80 designation). In 1995 Toyota finally fully embraced the concept of the luxury SUV by introducing a version of the J80 for its North American prestige nameplate Lexus called the LX450. 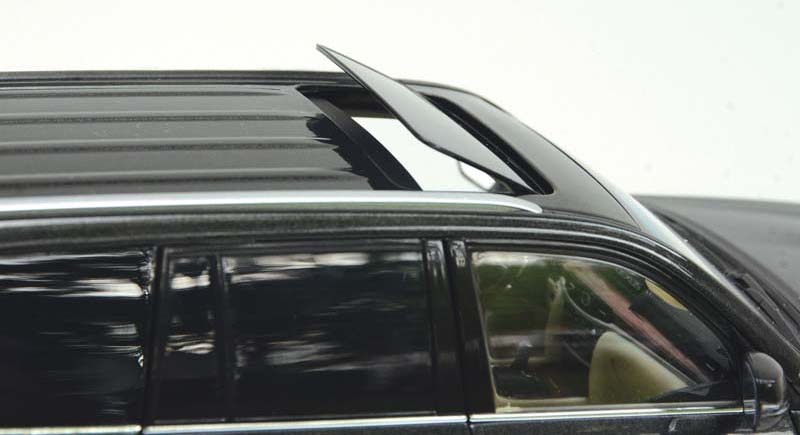 Kyosho has engineered numerous opening panels into the LX570: all four doors, the split tailgate, and even the sunroof!

The LX is hugely profitable, so Toyota has made it a priority to co-develop a Lexus version of each J-series SUV (the J100 in 1998 and the J200 in 2007) since. The latter underpins the flagship LX model you see here—the LX570. The LX570 got a mid-cycle freshening in 2016 and Kyosho’s model represents the facelifted version which added the huge spindle-shaped grille that Lexus now uses across its entire vehicle line. That gaping maw is a love/hate look for some, but the beefy LX wears it well and Kyosho has certainly nailed the look with admirable precision. The body is metal, and the Star Light Black paint is lovely with subtle metalflake providing the starry twinkle. The chrome brightwork is rendered with individually cast metal pieces as well, in the front fascia and window trim. There are cool little extras like folding mirrors which both protect the model during shipping and add a little realism.

You can bet a $95K SUV is going to be nice inside, and sure enough the interior is the highlight of the LX570—both in reality and in scale. Kyosho really shows its ingenuity here. The expected upscale touches are included: hidden hinges, carpeted floors, satin-finish surfaces replicating leather. The dash, console, and center stack all have excellent detail with their instruments, switchgear and simulated wood trim. All four doors open, as does the split tailgate. But the LX also features a functional sunroof complete with a sliding sun shade beneath! And it gets better. When you open the tailgate you see the optional third-row seating in the back of the LX570, but don’t just see them. Reach out and touch them. Specifically, fold the headrests forward, then the seat backs, then flip each seat 90-degrees outward and they fold away just like in the real LX570! That is simply awesome engineering in 1:18 scale. 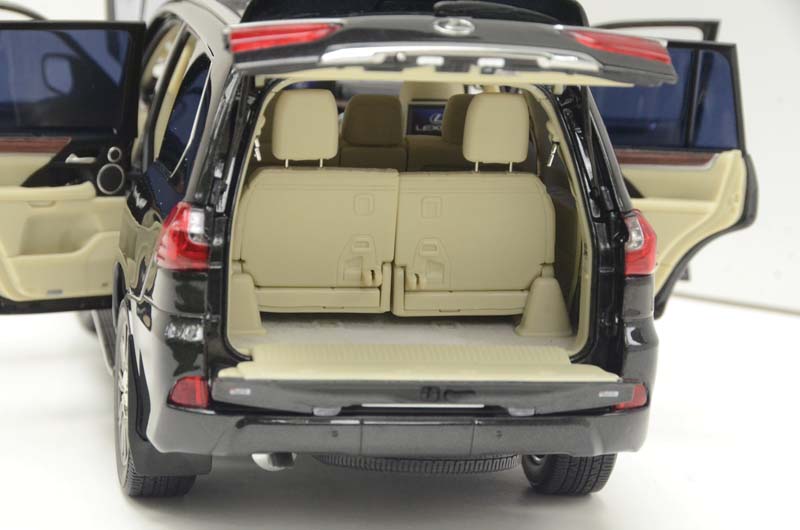 The model’s highlight is the functional folding third-row seat which folds forward and then to the sides, just as in the full-size LX570. 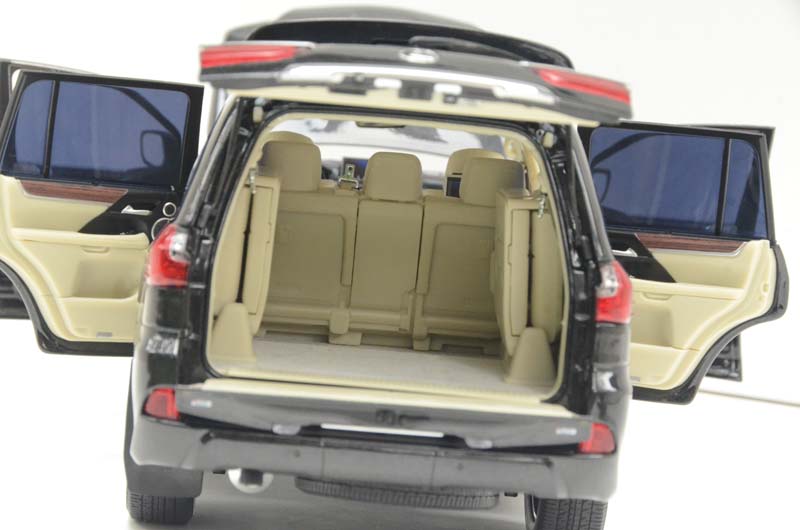 The “570” in the name refers to Toyota’s DOHC 5.7L V-8 which the LX shares with the Land Cruiser and Tundra series pickups. It makes 383 horses, which is enough to move the 6200-pound Lexus confidently, but this vehicle will never be confused with a hot rod. The motor plate beneath the hood is standard fare for this type of model; what you see is pretty much what you’d see under the real LX’s hood since its motor is covered in a plastic shroud painted metallic silver. The model adds a bit of detail for the air box, fluid reservoir, and some plumbing, but there’s not a lot else to see.

Mechanical detail on the chassis is a bit more interesting. The live axle/trailing arm rear suspension is old school and in full view as are the lower control arms for the independent front, although the rest is hidden under a belly pan/skid plate. The LX570 includes dialable ride height adjustment; the model’s stance depicts the default height, which is still pretty high for a luxury SUV. It rides on some serious 20-inch 10-spoke rims and relatively nondescript all-season tires, a sure indicator that Lexus expects few LX570s ever see off-road use. 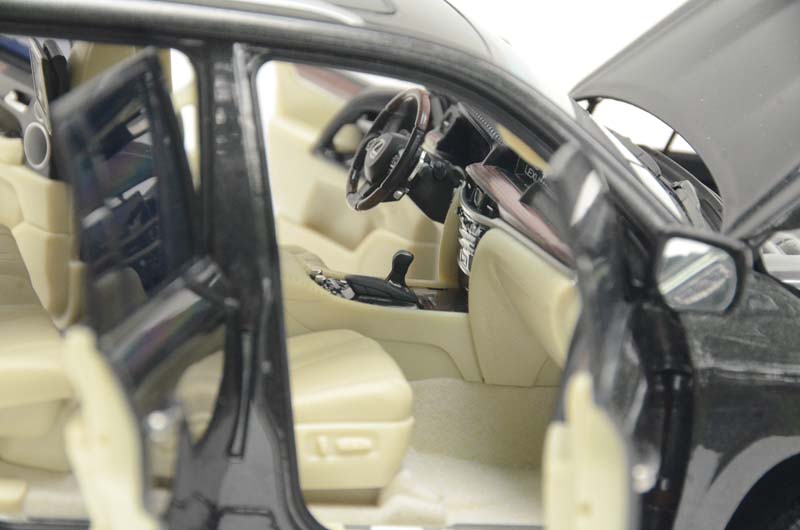 Luxury SUVs are all about interior quality and Kyosho delivers plenty in its 1:18 version.

Luxury SUVs may seem an unusual choice for diecast, but Kyosho has been doing them—and well!—for a long time and understands that the demand is there. Seeing the clever engineering that went into this LX570 should convert even more fans to the genre. The metal body and fine fit and finish present well, but the real treat lies inside with some unusual functional features. In short, this tall SUV offers collectors a lot for the money.