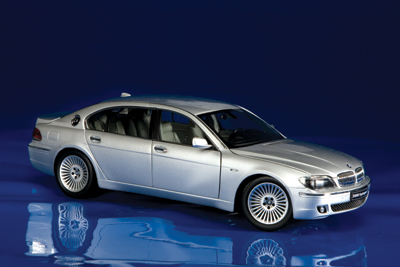 Kyosho has a good thing going with BMW. Their arrangement allows them to produce diecast for sale in BMW dealerships as well as for sale to individual collectors through Minichamps dealer network. The result is an impressive array of diecast, covering most of the current line and numerous models from past years. One unique model it has just released is a 1:18 replica of the Hydrogen 7 — BMW’s attempt at a zero-emissions car for the real world.

Like the real car, the model looks like the 760Li it is based on. The body casting and trim are identical, with wheels differing only slightly. The only obvious difference (other than the license plate panal that reads “BMW Hydrogen 7”) is the stylized fuel filler door. Even the engine bay looks the same, the painted and detailed panel for the 6.0L V-12 betraying no evidence of its alternative fuel usage.

The differences reveal themselve in the interior, the trunk and on the undercarriage, but only if you are really looking. The dash and surrounding trim are largely stock 7-series, with its iDrive wizardry and posh appointments. Even the backseat passengers get an iDrive knob — and a flip-up DVD screen to control with it. Those same rear-seat passengers are in the best position to notice the major difference between the Hydrogen-powered 7 and its garden-variety gas cousin: an enlarged bulkhead between the rear seat and trunk in which to house the 30-gallon liquid hydrogen storage tank. More evidence can be seen from the trunk, which is significantly tighter than normal. In order to operate on either gasoline or hydrogen, the 7 has to maintain two separate, independent fuel systems. The 19.1 gasoline tank resides in its normal spot so a mixture of passenger and cargo space had to be sacrificed for the second tank. Flip the model over and you can see some slight modification to the exhaust system, but aside from that there is no other evidence that this is anything other than a normal 7-series. Which is, of course, the point.

While not a conventional enthusiast machine (the H-powered V-12 can only muster 260 horses — down from the stock 438 — and it weighs 400+ pounds more) the Hydrogen 7 does demonstrate BMW’s considerable engineering prowess and the viability of hydrogen as a power source — provided of course the fuel-industry can catch up and make liquid hydrogen production as practical and ecologically friendly as the car itself is. In any case, Kyosho’s model is a worthy tribute to BMW’s achievement and an interesting piece to add to your collection.