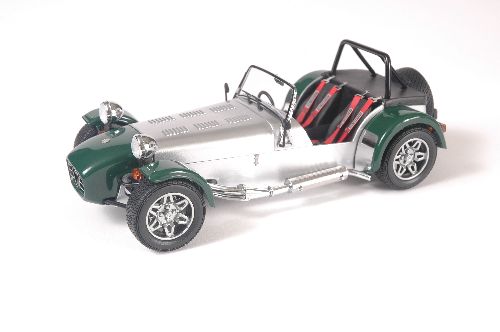 After many years of dominating the radio control car hobby, in 1992 Kyosho turned its attention to producing world-class diecast cars. To date, Kyosho diecasts have appeared five times on the cover of Die Cast Xincluding the amazing 1:12 scale Lamborghini Countach headlining the Fall 2009 edition.

Continuing Kyoshos commitment to diecast excellence is this far more obscure replica, the Caterham Seven. Originally produced by Lotus in kit form starting in 1957, it was Colin Chapmans ideal low-cost, high-performance club racer. In 1972, Caterham purchased the rights to the design and continues to offer both kits and fully assembled Sevens. Although appearing very much the same as in 1957, over the years development of the car has resulted in new models sharing few mechanical similarities to the original Lotus kits. In June of 2009, Kyosho issued the 1:18 scale diecast of this landmark sports car. This is a truly astonishing scale piece of history. The exterior is well detailed and looks very accurate in its dimensions and finish. 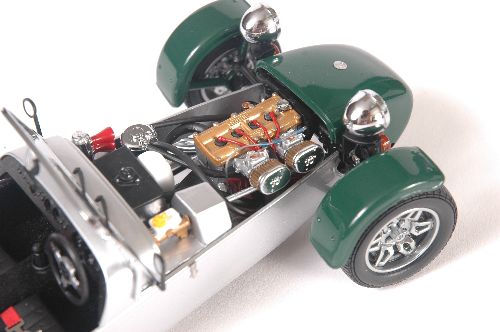 A lift-off hood features six rows of simulated louvers. Although they look good, none are actually punched through. An oval cutout on the left side accommodates twin side-draft carburetors with K&N filters. This is a tease to remove the

Like the real Sevens, the scale interior is basic and businesslike. This is not to say it is anything but excellent because it is just that. Especially well done are contemporary four-point racing restraints and anchor points. The gauges are also executed to the standards diecast collectors have come to expect from Kyosho.

The only weak point of the replica is the undercarriage. Turned over, the transmission looks like it is from a plastic model kit with a distinct seam cutting it in half. The rear suspension also looks a bit kit-like. The Seven has historic significance in both the full-size and scale worlds: as a creation of Colin Chapmanone of the most brilliant automotive minds of all time, and the first diecast from Kyoshoa company that has become the standard of the industry. Serious collectors may want to put this 1:18 scale on their consideration list.