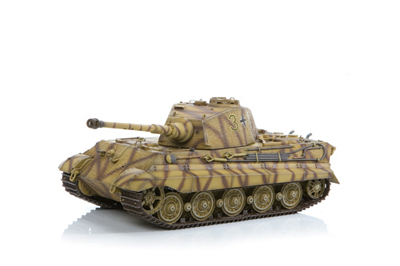 Germany’s King Tiger was easily the most powerful tank of World War II for either side, and had the German Army been able to produce more of them and deploy them sooner, they might well have drastically altered the course of the war. As it was, the first production examples did not roll out until January of 1944, and by the time production was halted in March 1945, only 492 units had been produced. Still, those 492 created an enduring legend, one that includes this astonishing fact: no record exists of the frontal armor of a King Tiger ever being penetrated by any weapon in combat. On the other hand, the King Tiger’s 88mm gun could destroy opposing tanks with a single shot at up to 6.2 miles!

Dragon Armor has taken the extensive research and expertise in surface detail it has exhibited on its 1:72 scale vehicles and applied it to the new 1:35 series. This is especially effective on the King Tiger, as the size of this behemoth comes across even more impressively. Paint patterns and detail molding are excellent. If your large-scale armor collection needs some extra firepower, you would do well to consider Dragon’s 1:35 King Tiger.