At its core, a diecast collectible is a sort of time machine—one that connects us to a time or a place when its subject vehicle played an essential role. That can be a moment from the collector’s own past triggering nostalgia. But it can also be a moment of cultural significance: a historic event, a film, a race, or—in the case of Johnny Lightning’s new Greatest Generation series—a battle. JL isn’t a brand we traditionally associate with military vehicles, but after previewing two new diorama sets connected to the Siege of Bastogne, that could be about to change.

If you’re not familiar with the story, Bastogne is a small town nestled deep in the Ardennes forest on the border between Belgium and Luxembourg, and just 20 miles from the German border. It’s rugged terrain even when not bitterly cold in the dead of winter when the battle began on December 20, 1944, as part of the larger German offensive to push the Allies out of Belgium and deny them the port of Antwerp. Bastogne was a key crossroad on the way to Antwerp, and German forces were determined to take it. The attack was largely a surprise, and the American forces were rocked back on their heels, retreating from the surrounding area into Bastogne. Reinforcements were hurriedly called in to support the beleaguered U.S. forces. Notably, the 101st Airborne set up defenses around Bastogne, but they were outnumbered 5 to 1. Nevertheless, they were determined to hold on until help could arrive. In response to the German commander’s request for surrender, the commander of the 101st, Brig. Gen. Anthony McAuliffe famously issued a single-word response: “Nuts!” His troops would hold out for seven days—over Christmas—before elements of the Third Army, under the command of George Patton, could come to their rescue and reinforce Bastogne. And it would be another month before U.S. forces to could definitively turn back the Ardennes offensive known as the “Battle of the Bulge,” which led to Germany’s defeat roughly six months later. 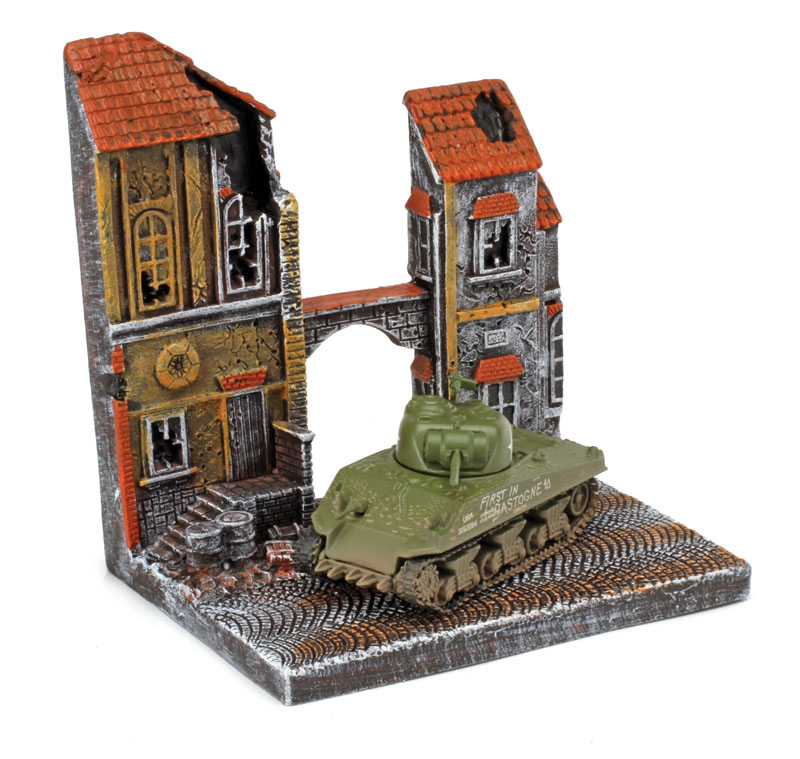 “The Chateau” has the more interesting backdrop. 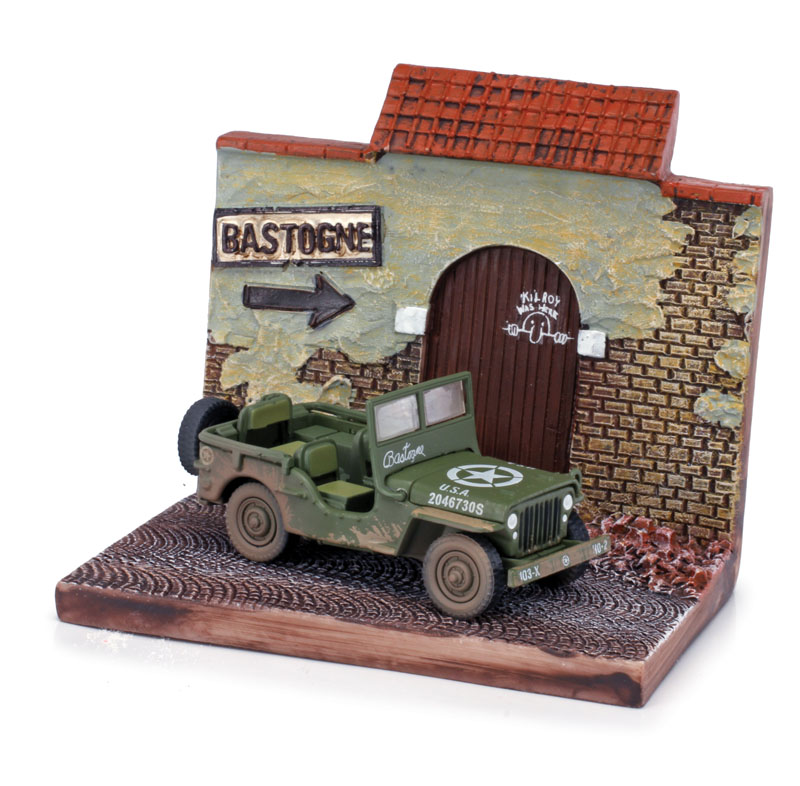 The “To Bastogne” Jeep is wonderfully detailed, from the interior to the mud-spattered fenders.

The first two Greatest Generation sets we received are a pair of attractive 1:64 dioramas. Actually, the Jeep set titled “To Bastogne” is 1:64, but the M4A3 Sherman tank in the set (“The Chateau”) is considerably smaller scale, approximately 1:100*—the rationale being that JL wanted the overall dimensions (and, thus, the price) of each set to be the same. More important, the resin backdrop/base is scaled perfectly to the vehicle it’s included with, so the scale disparity between sets is only a problem if you were attempting to combine them into a single display. The detail and weathering on both backdrops is excellent. We think the Chateau is the cooler of the two, because of the battle damage to the building, and because the archway is sized perfectly to position the Sherman under it, giving an additional display option. In terms of the vehicles, it’s no surprise that the larger-scale Willys Jeep is the better of the two. It has features such as separately cast tools, gear and transfer case levers, two-tone painted seats—things we aren’t necessarily used to seeing at 1:64. Both the Jeep and the tank are muddied up a bit, and the Sherman has a rotating turret and flexible rubber treads—impressive for its scale. It’s even got a fun bit of graffiti scrawled on the hull!

JL may be a relative newcomer to military collectibles, but you wouldn’t know it from the Greatest Generation dioramas. They’re well crafted and present beautifully, especially given that they retail for less than $20 apiece. At that price, you’d be “nuts” not to get them (apologies to Gen. McAuliffe.)

by the DCX Crew