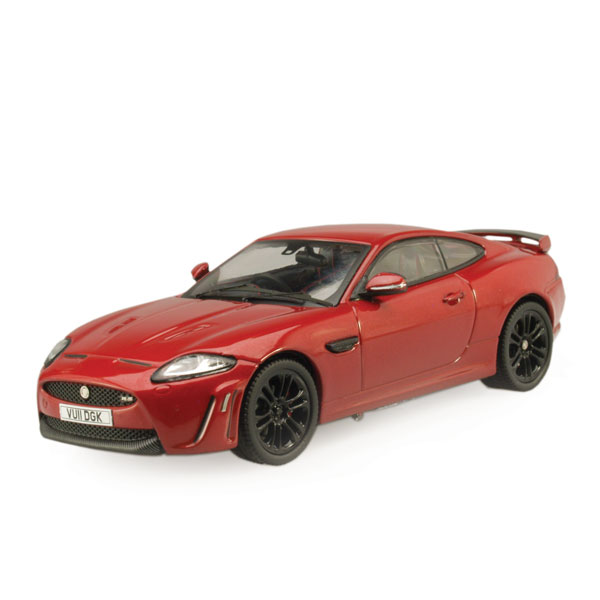 After introducing the sleek XK Coupe in 2005, Jaguar upped the ante with the supercharged 420-horsepowwer XKR in 2008. That was followed a year later by the 540-horsepower XKR-S, with a revised nose incorporating vertical fins, carbon-fiber front splitter and rear diffuser, and a carbon-fiber rear wing. The  “S” wasn’t available in the U.S. until 2012, so IXO’s diecast 2010 version correctly has European details and right-hand drive. This one’s not flashy, but the more you look at it, the more you realize how dead-on accurate and well-detailed it is. Photos show the sleek shape is right any way you look at it, the metallic paint is truly excellent, and the trim (mostly pad-printed black) is just as it should be. The tiny leaping cat trunk emblem and even smaller “XK” and “R-S” badges are very thinly photo-etched, but how did IXO do the chrome stripes around the mirrors? There are bright disks and red calipers behind the accurate wheels, which have silver lug nuts and 3D-etched crests on the hubs. The interior is done to the same level (yes, the nav panel and upper arcs on the tach and speedo should be blue) and even the buttons on the steering wheel have been picked out. IXO’s XKR-S looks to be among the best models priced under $50 this year. Wild About Wheels supplied this gorgeous Jag.  – Wayne Moyer