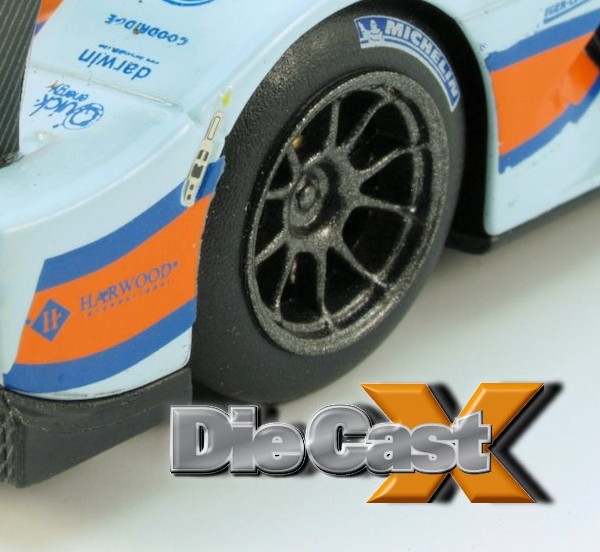 Aston Martin switched from a Lola chassis with a six-liter DBR9-GT V-12 to an in-house chassis powered by a turbocharged two-liter engine for the 2011 Le Mans Prototype (LMP) season. The new AMR-One was a dismal flop, slower than its predecessor and with a 100% failure rate. One car lasted only two laps at Le Mans while the other completed only four, and the AMR-One was never raced again. Unlike the full-scale prototype, IXO’s new diecast model is clearly a winner; the multitude of scoops, vents, louvers, wings, planes, and splitters are all thin, crisp, and just where they should be, while the base orange and blue paint is excellent. All the bare “carbon fiber” areas are reproduced with finely detailed decals, but in some spots they haven’t settled down into louvers and vents. Photos show the race graphics are 100% complete, with many being crisply hot-printed. Tiny body latches are bright photo-etched chrome, and the cockpit has painted relief-cast belts and an accurate display panel on the steering wheel.  Photo-etched disks with painted calipers sit behind the authentic wheels. This one looks right from all angles, and the dimensions check out just as well. Thanks to Wild About Wheels in Holland, PA, for providing this sample.  – Wayne Moyer