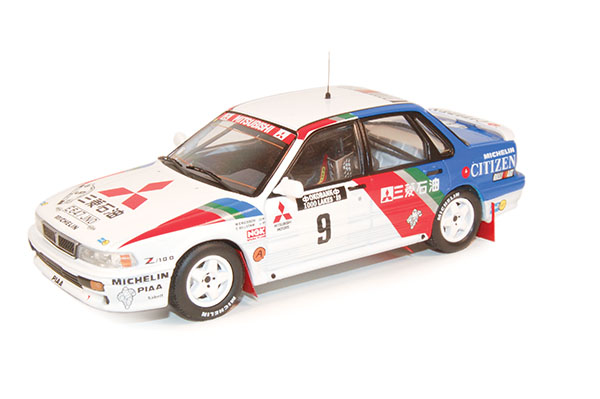 World Rally Championship rules required Mitsubishi to build at least 5000 4-door, 4WD, 195-horsepower, turbocharged street Galant VR-4’s to qualify it for Group A rally competition. Exactly how much power the turbo-four produced in race trim wasn’t specified, but it was enough to win two major events in Mitsubishi’s first year of competition. One was Finland’s 1000 Lakes Rally,and IXO has released this bargain-priced and very accurate model of the Erickson/Billstam winner. IXO has the basic Galant shape and rally modifications right, but what really catches your eye are the especially complex, nine-color(!) graphics that are complete down to the smallest sponsor decal. Looking inside, the stripped interior has accurate racing seats with five-point harnesses and metal hardware, full roll cage whose scale-size tubes don’t show any mold lines, a fully detailed instrument panel and navigation computer, and spare tire. But the prominent photo-etched support on the driver’s seat can’t be seen in 1000 Lakes photos.There’s a lot of well-done chassis detail, including stone guards behind each wheel and ahead of the rear transaxle. Bright ventilated disks are visible behind the accurate wheels, too. (Thanks to Wild About Wheels (215) 322-7593 for supplying this very accurate Galant VR-4.) —Wayne Moyer