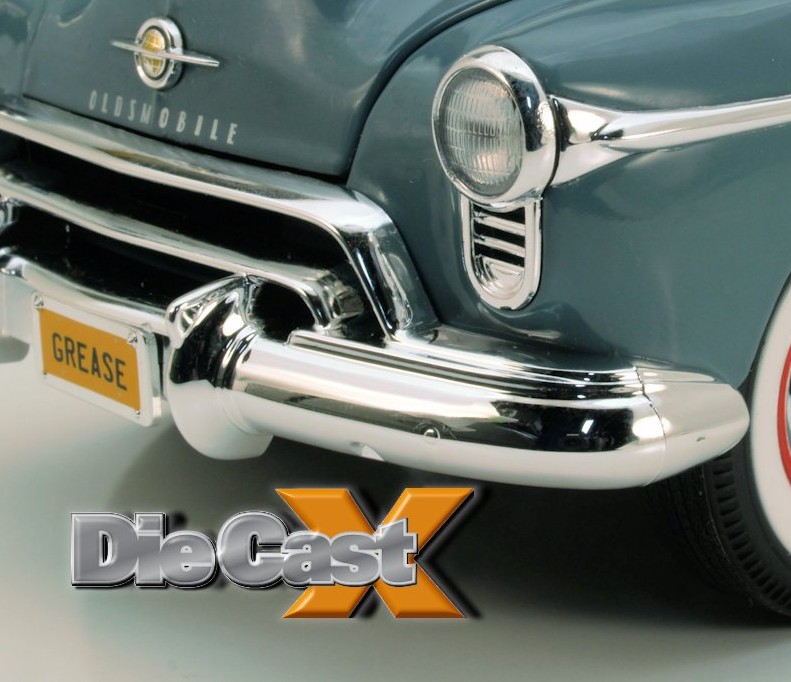 A young Ike Turner and his band (under the nom de tune “Jackie Brenston and his Delta Cats” recorded a seminal rock ‘n’ roll song called “Rocket 88” in March, 1951, with Brenston singing his heart out over his love for a hot-shoe Oldsmobile. The song went to number one – and so did the car. First introduced in ’49, the Olds Rocket 88 was a lightweight 78-series body married to a 303-cube V8 intended for larger Oldsmobiles. The combination won a ton of NASCAR races (and a ton more stop light drags and highway duels), and even capped the Carrera Panamericana in 1950. It was also a beautiful car, and that’s why we’re happy to see one of the better models of the Rocket emerge in scale – yet again – as this re-popped Auto World (by way of Ertl Authentics) 1:18 feature bomb from AW’s “Silver Screen” lineup. Here, the car’s attached to the 1978 nostalgia fest Grease; though we don’t recall any such car having a feature role in the film, we don’t think that the model’s overall excellence needs any further reason to be enjoyed. Opening doors, hood, and trunk, all on realistic hinges, join an opening gas filler door, a working suspension and steering, and a rotating driveshaft. Under the hood, the 135-horse V8 is fully (and we do mean fully) wired, plumbed, and labeled; under the “Club Coupe” roof, the floor is flocked, and the bench seat slides and tilts. There aren’t too many models at this price point that offer such an ambitious level of features and detail; if you need to sing “Summer Lovin'” whilst exploring, go for it. – Joe Kelly, Jr.