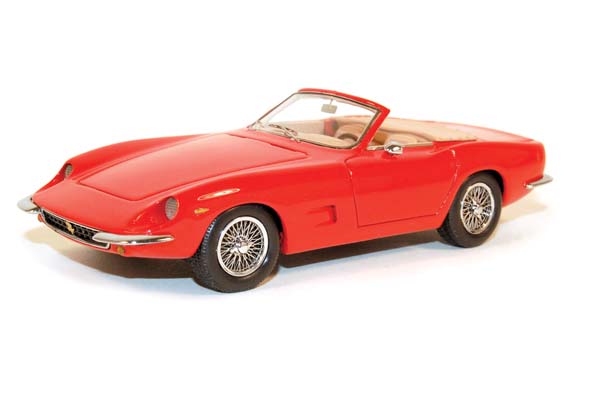 Shortly after Italian coachbuilder Intermeccanica signed a contract with Griffith Motors to build second-generation Griffith 600 bodies in large quantities, Griffith went bankrupt. With tooling already built, materials on hand, and arrangements in place for Mustang engines and trans- missions, Intermeccanica made the most of the situation by modifying the front of the body, designing their own chassis, and building almost 600 Coupes and Spyders between 1967 and 1969. In a parallel (scale) move, Automodello, who has already made an excellent Griffith 600 Coupe, has now released this superb model of the Italia Spyder. Although the body is similar, this isn’t just a top chop with a repaint. Up front, the grille now has a correct chromed surround with small twin bumperettes, while the Italia’s new scoops (not vents) have been added to the front fenders. A realistically textured and “wrinkled” boot cover has been added too. Reflec- tors, wipers, door locks, top sills, and grille badge are photo-etched, while the Italia rear badge is a crisp decal. The thin chrome windshield molding has the proper black simulated rubber surround; behind it, the realistic upholstery, plated interior handles, crisp decal instrument and radio faces all look just right. Details, shape, and dimensions, too. This is a super piece. — Wayne Moyer diecast.com