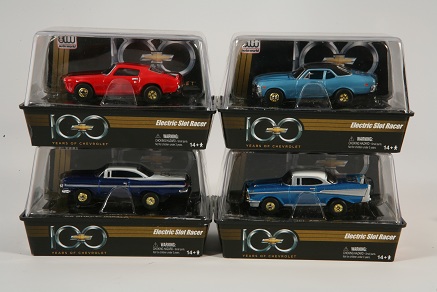 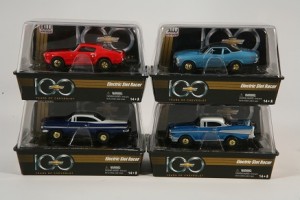 Grab your throttle and get ready for the ultimate Chevy scaled racing experience with Thunderjet Ultra G release 9;  a dedicated release to the 100th anniversary of Chevy.  As Auto World standardly does with most of their Slot Car line ups enthusiasts will find 6 different vehicles included in the set and each is offered in two various decos.  The Series includes a 1970.5 Chevy Camaro, 1959 Chevy Impala, 1967 Corvette Roadster, 1957 Bel Air, 1970 Nova and a 1968 Nova.  Each individual vehicle includes the centennial logo on the back deck and all 12 vehicles include special gold chrome rims which significantly differentiates this release from its predecessors