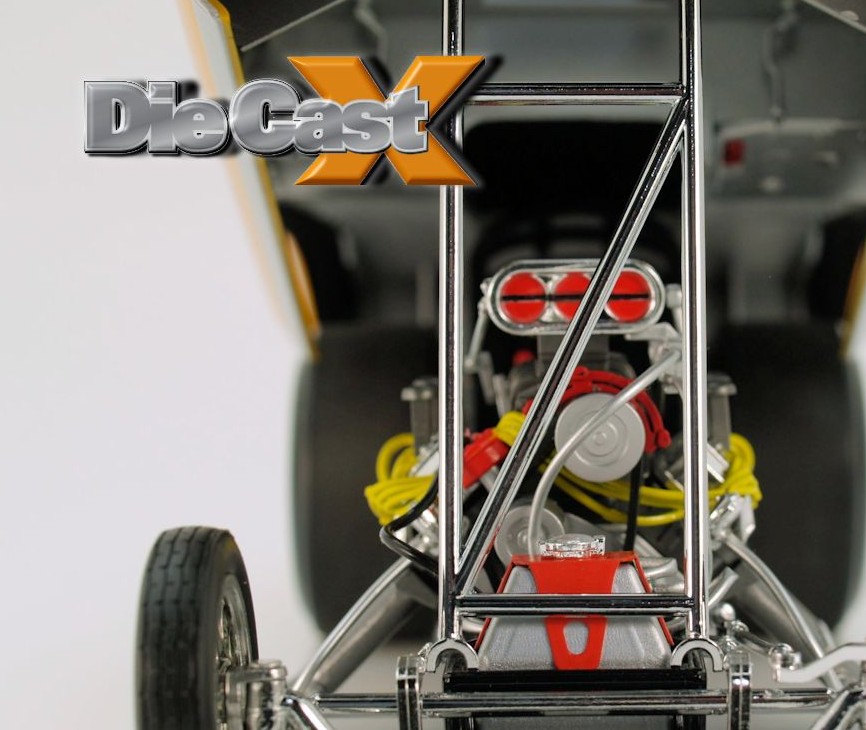 While the reality was far from perfect, the ties between Shirley Muldowney and Connie Kalitta sure looked great when the two were campaigning their Nitro Funny Cars across America. The “Bounty Hunter” and “Bounty Huntress” were a pair of ’72 Mustang-bodied floppers with Hemi power and near-identical paint schemes. Muldowney had become a tough competitor prior to the partnership, but match-race exposure helped bring the diminutive star driver into the national spotlight on her way to hard-won championships. As part of the now-legendary “Legends Of The Quarter Mile” series, this pair of funnys looks amazing. Shirley (don’t call her “Cha-Cha”) has the better looking ride, paint wise; the fire in the car’s gold paint has to be seen to be believed, and as on Kalitta’s white car, the graphics, including the airbrush-effect front and rear decos, are pin-point perfect and sealed under a clear coat that only the most accomplished hobbyists could hope to achieve. The show gets better beneath the removable shells. Here, again, Shirley’s car gets the nod, with body-matching gold metalflake on its “tin”, and yellow ignition leads on the massive Hemi (sporting corrected, larger-bore “bug catchers” – sweet). Drag fans will want these as a pair; one of the true breakout successes of the 1:18 segment just keeps delivering. Both cars are highly recommended.  – Joe Kelly, Jr.